Egypt’s interim President Adly Mansour is a judge, but the country’s most notorious jurist may well be the man known as the Butcher. Said Youssef issued a pair of rulings in March and April sentencing more than 1,200 people to death — after two trials lasting less than an hour each. The verdicts were applauded by the most vocal members of Egypt’s progovernment media. Among rights advocates in Egypt and abroad, the reaction to the mass sentencing was a unison chorus of condemnation. But the international outrage was matched only by the puzzlement of those wondering: How could any judge issue such a sweeping and seemingly inexplicable set of rulings?

The verdicts, issued in the province of Minya, cast a spotlight on Egypt’s judiciary, an immense and politically mixed institution that prides itself on its independence — a fact the government’s spokesmen cited in response to the international furor over the death sentences. “Egyptian judges are independent and there is no control over them,” Justice Minister Nayer Osman told reporters after the April verdict. “No one in the state is directing the judge — neither a minister nor an official.”

The Minya cases highlighted the autonomous power of judges within the Egyptian state, but also exposed the uncomfortable reality that many judges feel a sense of loyalty to Egypt’s even more powerful police and security apparatus. With Egypt’s media and much of the public still gripped by an anti-Islamist frenzy, other judges may simply issue rulings based on the prevailing political winds.

“This was a political ruling, violating all the judicial principles that we have in Egypt,” says Ahmed Mekky, who as a judge was a supporter of Egypt’s judicial-independence movement. Mekky also served as Justice Minister under deposed President Mohamed Morsi, but resigned from the cabinet over what he viewed as an Islamist “assault” on the judiciary.

“There is no interference in the sense that the ruling was based on orders from [presidential favorite and former military chief Abdul Fattah] al-Sisi or from his regime,” Mekky says. “Rather, this interference is a reflection of the general climate in which the judiciary has malice within it.”

Since the military removed Morsi — an Islamist and former leader of the Muslim Brotherhood — from power following a wave of protests last July, Egypt’s judiciary has been on the front lines of the new government’s clampdown on Islamist groups and other dissidents. More than 16,000 people have been arrested since Morsi’s ouster, according to official figures, but rights groups say more than 21,000 have been detained.

With such huge numbers of people detained, mass trials have become a daily occurrence. The government asserts the arrests are a needed step to combat militancy and restore stability, an argument many judges have endorsed by handing down harsh sentences for protesters and members of Islamist groups.

Often such rulings make use of Egypt’s vague penal code, including laws against “insulting the judiciary” and “membership in a banned group,” as well as a new law that bans any street protest without explicit government permission. For example, last Saturday the criminal court in the town of Banha, just north of Cairo, sentenced seven people to life in prison for the nonlethal crime of blocking roads during a demonstration last August. Another group of 119 protesters were sentenced in April to three years in prison in connection with an Islamist-led demonstration in Cairo in October. On the same day as the second mass death sentence, Cairo’s Court of Urgent Matters banned the activities of the April 6 Youth Movement, a dissident group that played a key role in organizing the January 2011 uprising that ended the presidency of Hosni Mubarak.

“This is not a case of one judge having gone off the rails. You have an entire justice system that’s going off the rails,” says Sarah Leah Whitson, executive director of the Middle East and North Africa Division of Human Rights Watch. “It’s not simply about being overburdened, it’s about consistently failing to ensure that defendants have due process and each receive free and fair trials.”

The specifics of the Minya cases rendered the verdicts all the more shocking in the eyes of the outside observers. In the first case, in March, 529 defendants stood collectively accused of murdering a single police officer and attempting to kill two others, attempted murder, threatening public order, burning a police station and belonging to a banned group, the Muslim Brotherhood. The trial lasted less than an hour, and the prosecution did not produce any evidence implicating a specific defendant. In the second case, in April, 683 people were sentenced to death, also over the killing of a police officer.

A number of obstacles remain to the implementation of the death sentences. Under Egyptian law, the country’s Grand Mufti must first approve any execution. Of the first group of death sentences, all but 37 have already been commuted to 25-year prison terms.

Many of Egypt’s judges sparred with President Mubarak during the three decades of his authoritarian rule. Though Mubarak’s appointees left a deep imprint on the judiciary, some judges chafed at the regime’s use of torture and military courts. Even in spite of the attempts to stack the courts with proregime judges, a judicial-independence movement gathered force, reaching a high-water mark with judges’ denunciation of fraud in the 2005 elections.

By the time of the 2011 uprising that toppled Mubarak, some protesters regarded judges as a force for integrity within the state. Judges also clashed fiercely with Morsi, revolting against his attempts to bring the judiciary under greater executive oversight. But few of Egypt’s nearly 15,000 judges and prosecutors spoke publicly against the Minya ruling, even though it appeared to lack even basic internal logic. The judiciary’s history as a strong institution and its avowed culture of independence has fostered a sense of professional solidarity among judges.

“Each judge here in Egypt chooses his own way of thinking,” says one judge from a major Cairo court, when asked about the Minya case. The jurist, who has asked to remain anonymous because of the sensitivity of the matter, says he believes Egyptian judges generally maintain their political neutrality, and that the Minya case had been blown out of proportion in the media. “We don’t deal with people, we deal with evidence.”

Nathan Brown, a political scientist at the George Washington University, in Washington, D.C., who speaks regularly with Egyptian judges, says the judiciary has a strong sense of corporate identity. “It’s a profession where they don’t want to air their dirty laundry in public, so that, even judges who are uncomfortable with this verdict would certainly not want to go on the record and would at most criticize it obliquely,” Brown says.

“There were a lot of judges who were just spooked by the Morsi presidency,” Brown adds. “They’ve reacted since July by continuing the battle and seeing themselves as part of an attempt to restore the authority of the Egyptian state using whatever means were available to them.”

Often the outcomes of key cases hinge on which judges are tapped to oversee them. Judicial experts say there’s been a trend of politically significant cases, including mass trials, being handed to judges who are most eager to clamp down on the Muslim Brotherhood. “There are certainly some lawsuits where judges are selected in a manner that is not necessarily politicized and it is fully an internal process within the judiciary, but it is [with] the high-profile cases that have some political implication,” says Sahar Aziz, a professor of law at Texas A&M University and a board member of the Egyptian-American Rule of Law Association.

Even though some members of Egypt’s judicial firmament find fault with the excesses of their peers, legal experts stressed in interviews that whatever mistakes had been made, the Minya rulings were made in “accordance with the law,” or in Arabic, bil qanun. Given the ambiguity of Egyptian law, bil qanun has proved an elastic notion in a moment when the Mubarak-era security state is reasserting its power. “The decision itself, it’s a harsh decision. At the same time, I can’t say it’s not in compliance with Egyptian criminal law,” says Mohamed Arafa, a professor of law at Alexandria University, in Egypt, and Indiana University, in the U.S.

Or, in the words of the Cairo judge who speaks anonymously: “It was legal.” 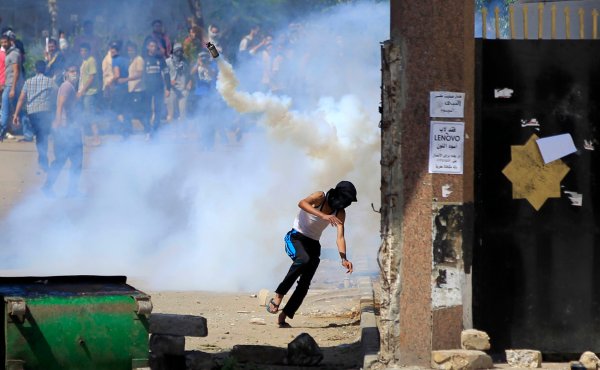 Muslim Brotherhood Eyes Comeback in Egypt
Next Up: Editor's Pick