Thailand Looks to Its Senate to Solve a Deepening Political Crisis

Thailand’s political crisis deepened further Tuesday as efforts to find a compromise between government supporters and opponents foundered in the nation’s Senate.

The upper house met Monday to discuss options after Prime Minister Yingluck Shinawatra and nine of her cabinet members were removed from office last week by the nation’s Constitutional Court.

The Senate is the only legislative chamber still functioning after the House of Representatives was dissolved in December ahead of now annulled elections.

Antigovernment protesters, known as the People’s Democratic Reform Committee (PDRC), are demanding the Senate replaces the current caretaker cabinet with an appointed administration.

However, Jatuporn Prompan, a leader of the pro-Yingluck Red Shirt movement, told thousands of supporters on the outskirts of the capital Sunday that any such move would “create a serious crisis that could lead to civil war that no one wants to see.’” The Red Shirts want the elections originally slated for July 2o to go ahead.

The PDRC, led by demagogic former Democrat Party lawmaker Suthep Thaugsuban, are camped out in state buildings adjacent to Government House and have threatened to appoint their own alternative government if the Senate fails to act in its favor.

Security officials are desperate to avoid any confrontation between the two groups. More than 25 people have been killed and hundreds injured during six months of street protests.

“The problem has accumulated for more than 10 years,” said acting Senate Speaker Surachai Liengboonlertchai, according to the Nation. “We won’t be able to solve the problem within a day. We’ll try to do it as quickly as possible in a way that is fairest for the country and for the people.”

Any escalation in tensions may force the nation’s powerful military to intervene, albeit reluctantly, says Ernest Bower, Southeast Asia expert at the Center for Strategic and International Studies in Washington, D.C.

“The military doesn’t want to step in at this point,” he says. “It is saving its powder for the bigger game. [But] if chaos takes place, the military would step in.”

On Sunday, Thai army chief General Prayuth Chan-ocha said he had no plans to take control or launch a coup. “We will always be there for the country and people to lean on,” he said, “but let us be the last resort.”

Thai society has been irreconcilably divided since Yingluck’s brother, Thaksin Shinwatra, was removed in a military coup in 2006. The billionaire telecoms mogul is adored by the populace in the north and northeast of the country but is loathed by royalists and the urban middle classes of the south, who believe that the now ousted Yingluck was little more than her brother’s proxy.

“The ouster of Yingluck is only a step on the road to the endgame,” says Bower, “and there will be more and more of these steps until finally the succession happens and the military decides what they will do, and Thais decide what they can live with.” 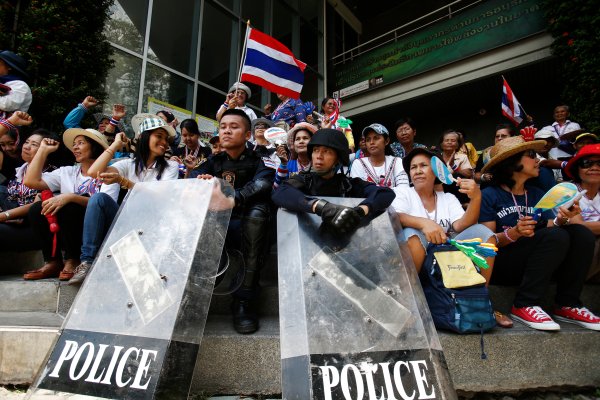 Thailand's Power Struggles Return to the Street
Next Up: Editor's Pick