Tom Wheeler, chairman of the FCC, listens during a House Energy and Commerce Committee hearing in Washington on Dec. 12, 2013
Andrew Harrer—Bloomberg/Getty Images
By Sam Gustin

Net-neutrality advocates are mounting a campaign to persuade Wheeler to reclassify Internet broadband service under Title II of the Communications Act, which would subject companies like Comcast, Verizon and AT&T to “common carrier” regulation.

For decades, the FCC has regulated traditional phone service under common carrier provisions that require phone companies to connect all calls to people around the country. But in 2002, the FCC made the fateful decision to classify broadband as an “information service” not a “telecommunications service” — paving the way for Internet fast lanes and setting the stage for a decade of legal wrangling.

The FCC’s Internet-governance policies have been in limbo since a federal court struck down most of the agency’s 2010 open Internet order in January. That order prohibited broadband providers like Comcast and Verizon from blocking traffic like Skype or Netflix on wired networks or putting them into an Internet “slow lane.”

“Chairman Wheeler has heard the American people, and he has changed the item significantly to make Title II a more robust option,” a senior FCC official told TIME on Monday. It’s unclear what that would actually mean, because the draft proposal has not yet been released to the public.

The Internet has become a new public utility, many Net-neutrality advocates argue, and should be treated as such. The nation’s largest cable and phone companies fiercely oppose that idea — fearing greater regulation — and are mobilizing their lobbyists and allies on Capitol Hill to push back.

The FCC’s eighth-floor executive office has been thrown into chaos amid a mounting backlash that shut down its phone lines as a growing number of open-Internet advocates camp out in front of their office.

“Since Wheeler’s proposal was first reported in the media we’ve sent hundreds of calls to the FCC on a daily basis,” says Tim Karr, senior director of strategy at D.C.-based public-interest group Free Press, a longtime Net-neutrality-advocacy group.

Wheeler, the former top cable and wireless-industry lobbyist, is facing a crucial vote on Thursday about whether to advance his plan to allow broadband providers to strike special deals with Internet companies for preferential treatment — sometimes called “paid prioritization” — in the “last mile” to consumers’ homes.

Wheeler says he supports the idea of an open Internet — and opposes a system in which deep-pocketed tech titans can discriminate against startups — but he failed to anticipate the depth of public opinion on this issue, not to mention skepticism by his fellow Democratic FCC commissioners.

Late last week, commissioner Jessica Rosenworcel said she has “real concerns” about Wheeler’s plan and called for the FCC to delay next week’s crucial agency vote on the matter. Commissioner Mignon Clyburn has also raised concerns.

Wheeler plans to press ahead with Thursday’s vote, an FCC official told TIME late on Monday. The vote wouldn’t enshrine the new rules, it would only approve what’s called a “notice of proposed rulemaking” (NPRM), and make the draft proposal available for public review and comment.

“It’s not even halftime and they’re 20 points down,” a senior tech-industry executive told TIME. “But they have a deep bench and there’s plenty of time left.” If Wheeler does not feel he has the three out of five votes needed to approve the NPRM, he has the power to postpone the vote until the FCC’s next meeting. But it appears he’s moving forward.

The crisis facing the FCC is not surprising. For nearly a decade, the FCC has been trying to implement rules that would ensure that the Internet remains open for the next generation of tech startups like YouTube, Skype and Netflix. Open-Internet advocacy groups appear to be trying to mobilize a grassroots response like the one they successfully mounted against the 2012 SOPA/PIPA Internet copyright bills.

Last week, more than 100 Internet companies — from Google down to the smallest startups — sent a letter to the FCC expressing alarm over the agency’s proposed Net-neutrality rules and imploring regulators to protect Internet openness.

“Young, high-tech firms have represented all net new job growth in this country for the last 30 years,” wrote Julie Samuels, executive director of Engine Advocacy, the nonprofit tech policy group that organized the letter. “It is these startups that drive our economic prosperity, create jobs and improve our lives. Yet these companies stand to suffer the most when faced with uncertain, discriminatory rules that threaten the open Internet.”

Wheeler’s plan — which was leaked to the press two weeks ago — would allow companies to strike paid-prioritization deals as long as they acted in a “commercially reasonable manner subject to review on a case-by-case basis.” Wheeler has not defined what type of agreement would be considered commercially reasonable, but even if he does, it’s unlikely that most Net-neutrality advocates would support the plan.

Open-Internet advocates have long considered such Internet “fast lanes” to be anathema to Net-neutrality principles because they would give deep-pocketed companies an advantage over startups.

“Startups are often unable to compete at scale to overcome, negotiate with and manage thousands of discriminatory carriers and networks,” says Samuels. “Young, high-tech firms must rely on the certainty of nondiscriminatory rules to continue to grow, create jobs and build new technologies. This is why we urge the FCC to protect the open Internet.”

On Monday, Wheeler prepared to circulate a new proposal that would stop short of Title II reclassification, but would make that option more realistic for the FCC. But after nearly a decade of patchwork Net-neutrality protections, open-Internet advocates remained skeptical.

“Chairman Wheeler is feeling the grassroots pressure against his pay-for-prioritization proposal,” says Craig Aaron, president and CEO of Free Press. “But he still isn’t giving Internet users the Net-neutrality protections they demand. He needs to abandon the flimsy and failed legal approach of his predecessors and reclassify Internet service providers as the common carriers they are.” 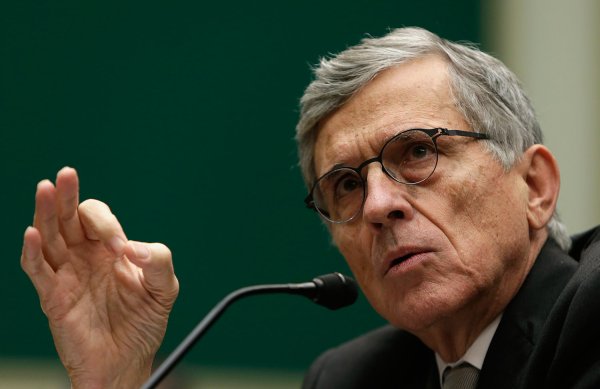