A Response to the Question: "Why Aren’t Muslims Condemning Boko Haram?"

As a leader in the Muslim community, just about every time a crazy Muslim or group of Muslims do something insane in the world, I am asked or prominently hear this question being asked, “Why aren’t Muslims condemning this?!” The latest example of this is calls to condemn the cult known as “Boko Haram” in Nigeria who have kidnapped 300 girls.

Well, there are two problems with the questions itself – and both are based on false premises. First is the assumption that Muslims have not, in fact, condemned other violent extremist Muslims. This is simply untrue. Muslim religious scholars, intellectuals, activists, organizations, and countries have all condemned Boko Haram and the kidnappings in unison. All you have to do to know this is type in google search “Muslims condemn Boko Haram” and articles will abound.

The second problem with the question of why Muslims, supposedly, don’t condemn evil actions from other Muslims requires a bit more explanation. The problem with it is this inherent assumption that somehow radical violent extremist cults can legitimately speak for Islam – one of the great world religions whose contributions to civilization over the course of fourteen-hundred plus years speaks for itself (Just browse through 1001 Muslim Inventions online if you have your doubts). And, that if Muslims don’t come out and spend all of their remaining days on earth condemning evil at the hand of other Muslims, then somehow this inherent assumption becomes true.

It’s true that Muslims today suffer from a crisis of authority and the question of who speaks for Islam is not an easy question to answer. But, rest assured that this does not mean that Muslims are operating under some sort of Wild, Wild West where everything and anything goes. Muslims have a divinely revealed scripture, established teachings from the Prophet Muhammad, and a system of morals and ethics that have guided the majority of Muslims to live purposefully and righteously in the world.

Now, the problem with the second problematic assumption is that in the West, today, we continue to grapple with age old misinformation and biases about Islam and Muslims that have resulted in deep seated fear and mistrust. This began way before the travesty and tragedy of 9/11. It begins centuries earlier when Muslims and Christians were engaged in bloody wars and competition for power. The rallying cries for war were couched, naturally, in propaganda against Islam’s prophet, scripture, and way of life as just evil and worthy of destruction. Even though we would like to think of ourselves as much more educated and enlightened today – and, I think we are, in some ways – the impact of old propaganda cannot be wished away. Indeed, much of this propaganda is to be found in a lot of works by Orientalists up to the present time – albeit, often, in much subtler ways. It takes intellectual courage and independent thinking to think about Islam and Muslim history through new lenses.

This historic bias has too often led to Muslims simply being written out of the books across academic disciplines in the West – unless it reinforces the bias. Even in universities when we study science, philosophy, law and ethics, and even world history – Islam and the contributions of Muslims rarely gets much attention. Muslim intellectual history and discourse is just assumed to be irrelevant. Some of this is just the problem of an ethno-centric educational system and worldview, but a lot of it is deeper than that.

All of this, then, results in seeing Muslims as exotic, as the other, as belonging to a different civilization and ethos. Thus, Muslim Americans, for example, are always asked about condemning evil in some foreign land which is largely beyond their control and sphere of influence, but rarely thought of as equal partners for building coalitions against injustices right here at home.

A lot of this is the fault of Muslims. We constantly buy into the narrative rather than producing our own narrative. And, we are often quick to condemn injustice “over there” and act like we don’t give a damn care in the world when injustices happen at home. Just think of the Trayvon Martin tragedy and the painful silence of too many Muslim organizations and public figures. Think of the gross injustices of the prison industrial complex and how rarely that becomes a point of concern in Muslim circles. And, the list can go on. Too many Muslims have accepted their social categorization as the “other” despite a lot of talk about being American and proud of it. It’s time for us to own issues domestically as much as we do internationally if we are serious and want to be taken seriously.

In part, when Muslims are asked to constantly condemn or do something about what’s happening abroad, it is an attempt, consciously or subconsciously, for us as a society to shift our focus from some of the ugliness we have to confront when we look into our own mirror. It’s much easier, especially in this age of globalization, to spend our waking hours following the latest news on the kidnapped girls in Nigeria than it is to confront our own problems with sex slavery, rape, and pornofication of women right here at home. It’s more convenient to ask why Muslims are killing each other in places like Iraq and Afghanistan than to admit that we’ve completely failed generations of young Americans whose lives are scarred by inner-city gang violence everyday in this country. And, it’s more comforting to shake our heads at terrorists who kill at random than to condemn our own government for the use of drones that have killed innocents – including children – and have taken it in their own hands to be judge, jury, and executioner in this elusive war on terrorism.

So, let’s remember, the next time we want to point our finger and ask why someone else isn’t doing something to condemn or stop evil in the world, there are four fingers pointing right back at us. And, the next time we want to shake our head and condemn Muslims for not condemning other Muslims, let’s pause and ask a different question: “What can I do to work with Muslims against all of the injustices in the world I live in?”

Sohaib Sultan is the Muslim chaplain at Princeton University and directs the university’s Muslim Life Program in the Office of Religious Life. He is the author of The Koran for Dummies (Wiley, 2004) and The Qur’an and Sayings of the Prophet Muhammad: Selections Annotated and Explained (Skylight Paths, 2007). 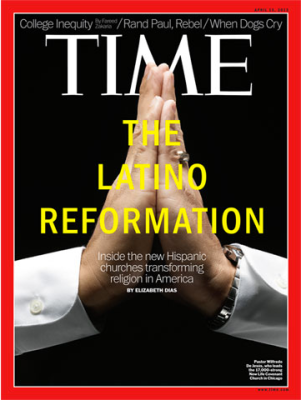 Why One In Four U.S. Latinos Now Identify As Former Catholics
Next Up: Editor's Pick