The growth of renewable energy has gotten a lot of attention recently — and with good reason.

Buoyed by falling costs, wind and solar PV electricity generation has experienced double-digit growth globally in recent years. In the U.S. alone, demand for solar power increased by 41% in 2013. Altogether there are more than 440,000 operating solar electric systems in the U.S., a number that is growing every day thanks to the work of innovative new retailers like Solarcity. The Department of Energy just gave the go-ahead to three pioneering offshore wind developments along the U.S. East Coast.

All that good news makes it easy assume the world will soon be mostly powered by renewable sources. But as a new report from the International Energy Agency (IEA) makes clear, the numbers simply don’t back those dreams up. The global increase in coal-fired power generation has been bigger than that of all non-fossil fuel sources combined. And that’s not a recent change — coal has been outpacing non-fossil sources for 20 years, and coal now supplies about 40% of the world’s electricity needs. Six out of ten coal plants built over the past decade use the least efficient combustion technology, which means they emit even more pollution and carbon emissions then they should.

Even as the threat of climate change grows, the world is still using more and more of the dirtiest energy source out there; the World Resources Institute estimates that there are almost 1,200 big new coal plants in 59 countries proposed for construction. Developed countries like the U.S. should be able to reduce coal use rapidly, but most of the growth in electricity demand in the decades to come will be in developing nations—and coal will almost certainly be a big part of it. “Some people don’t want to talk about coal, but it’s the elephant in the room,” says Maria van der Hoeven, the executive director of the IEA. “It is there and it will be there for decades to come.”

Given that reality, you’d think the world would be working hard to make “clean coal” a commercial reality. That would be achieved by carbon capture and sequestration (CCS) technology, in which carbon emissions from fossil fuel sources are captured and then buried in the ground, making coal essentially carbon-free. But CCS has been stalled by technological challenges and high costs. Even though the G8 in 2008 backed an IEA recommendation to launch 20 large-scale CCS demonstration projects by 2010, a recent Wired cover story on the subject reported that the number of such projects around the world is actually falling, except in China.

That has to change. As the IEA makes clear, growth in electricity demand is outpacing all other uses of energy, as developing nations begin to achieve electrical parity with the developed world. Efficiency will help significantly, but given that there are still 1.2 billion people around the world who lack access to electricity, we’re going to need more power. Renewable energy will keep growing as it gets cheaper and cheaper, while smarter grids will allow utilities to manage intermittent sources and reduce waste. The grid of tomorrow won’t look at all like the grid of today — except that it will almost certainly still include coal.

The IEA reports that if the world wants to hold global temperature increase to 3.6 F (2.0 C), the CO2 emissions per unit of electricity must decrease by 90% by 2050. It won’t be cheap; the agency estimates the transition will cost $44 trillion, though that could potentially be largely offset through fuel saving from efficiency. Either way, we almost certainly won’t get there unless we can make coal a carbon-free source of electricity, too. 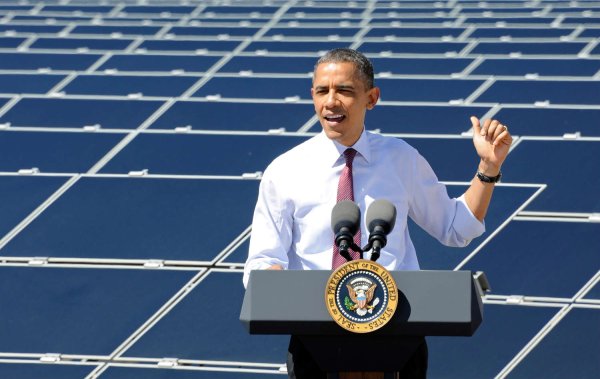 Obama's Energy Announcements Are Nice, But We'll Need Much More
Next Up: Editor's Pick