The Russian paramilitary group known as the Wolves' Hundred, with their commander Evgeny Ponomaryov in the foreground, block the road near the checkpoint not far from Slavyansk, in eastern Ukraine, April 20, 2014
Maxim Dondyuk
By Simon Shuster / Kramatorsk

About a month ago, soon after arriving in eastern Ukraine, a group of Russian paramilitaries known as the Wolves’ Hundred seized an old truck from a local police station and used some spray paint to give it a makeover. They did not remove the blue siren from the roof, as it seemed to lend them an air of authority as they drove around the towns that they control. But on the hood of the black, Russian-made Hunter SUV, they drew their insignia — the snarling head of a wolf in profile.

For weeks, the central government in Kiev, along with its allies in the U.S. and Europe, have been trying to find solid evidence of Russian boots on the ground in eastern Ukraine. They need look no further than the men of the Wolves’ Hundred. In separate interviews with TIME over the past three weeks, four of its heavily armed fighters have admitted that they came from the southern Russian region of Kuban. They are part of the Cossack militias that have been in the service of Russian President Vladimir Putin for almost a decade, and they say they will not go home until they conquer Ukraine or die trying.

Their links to the Russian state are, however, just tenuous enough for Putin to deny having sent them, and these fighters in turn deny being paid, equipped or deployed by the Kremlin. They say they are volunteers driven by the ideals of their Cossack brotherhood — Russian imperialism, service to the sovereign and the heavenly mandate of the Russian Orthodox Church. In the past month, their campaign has revealed a new kind of Russian warfare, one waged through the use of militant nationalist groups acting as proxies. During the Russian invasion of Georgia in 2008 and the takeover of Crimea in March, armed Cossack militias served alongside the Russian military. But this appears to be the first time they have gone to fight as more than an auxiliary force.

In eastern Ukraine, the men of the Wolves’ Hundred formed the original core of the militant fighters who took over several towns in April, and they claim to have killed numerous Ukrainian servicemen over the past few weeks. They say they got most of their weapons in April by storming Ukrainian police and security buildings and seizing their arsenals. For reinforcements, they have relied on the vast network of Cossack militias that operate in Russia and have managed to sneak across the border into Ukraine with relative ease.

“For every Cossack they kill, we will kill a hundred of their men,” says one of the militants from the Wolves’ Hundred, who goes by the nickname Vodolaz, or Diver. “We won’t just kill them. We will give their bodies back to their mothers in bags,” he told TIME on May 4 outside their base of operations in the town of Kramatorsk. Just behind him, the commandeered police truck stood parked, its snarling insignia bathed in the afternoon sun.

The commander of the Wolves’ Hundred in eastern Ukraine is a Russian citizen named Evgeny Evgenievich Ponomaryov, who goes by the nickname Batya, meaning Daddy or Papa. For at least two years before he went to fight in Ukraine, Ponomaryov, 38, served as a uniformed officer in the state-sponsored Cossack militias in his hometown of Belorechensk, a bastion of Cossack culture in southern Russia.

But the Wolves’ Hundred was formed, Ponomaryov says, long before Putin incorporated the Cossack militias into the Russian armed forces. “We’ve been around since the 1990s … We got together, organized ourselves, and began going as volunteers wherever there was a threat to Russian Orthodoxy, to Orthodox believers or to the interests of the Russian empire,” Ponomaryov tells TIME in Kramatorsk. “We’ve been at it for almost 20 years, with different men, as part of different military forces, but always as the Wolves’ Hundred.”

The history of this regiment goes back nearly a century. It was founded as a cavalry force in 1915 by Russian Colonel Andrei Shkuro, an ethnic Cossack and native of the region of Kuban. His fighters quickly distinguished themselves during World War I as some of the most ferocious in the Russian imperial army. “It all began with Shkuro,” Ponomaryov says of the original Wolves’ Hundred. “Back then our men would hit the Austrians so hard they would abandon their cannons and run.”

During their service to Czar Nicholas II, the Wolves’ Hundred were easily identifiable by their military banner, which depicted the head of a wolf against a black background. Their traditional Cossack hats, or papakhas, were made out of wolf fur instead of the customary sheepskin, and its fighters would often embellish their Cossack uniforms with the severed tail of a wolf. Most of all, they were known for their distinctive battle cry, which mimicked the howling of wolves in order to intimidate their enemies.

By some accounts, they were notably lacking in discipline. The legendary Russian General Pyotr Vrangel, who was known as the Black Baron for his rank within the nobility and the color of the Cossack uniform he wore, described the original Wolves’ Hundred as a band of marauders. “Barring a few exceptions, the worst elements of the officer corps joined them,” Vrangel wrote in his memoirs. “The detachment of Colonel Shkuro … mostly roamed behind the front lines, getting drunk and pillaging.” Their stomping grounds during World War I were mostly in southern Russia, modern-day Ukraine, Belarus and Moldova.

But they only lasted about five years in their original incarnation. In 1917, the Bolshevik Revolution led to the outbreak of the Russian Civil War, pitting the czarist forces of the White Army against the communist Red Army. Shkuro, who had by then attained the rank of lieutenant general, helped make the region of Kuban one of the most stubborn holdouts against the communists. But by 1920, the Wolves’ Hundred had been routed and disbanded, and Shkuro fled to Europe along with many czarist officers.

The Cossacks became the targets of mass persecution by Soviet authorities in the decades that followed. Their military units were disbanded as relics of czarism, and their officers were killed and imprisoned by the many thousands. It was only after the collapse of the Soviet Union that they saw a state-sponsored revival. In 2005, Putin signed a law reinstating the Cossack tradition of service in the Russian armed forces. They were given the right to guard the national frontiers and serve alongside the Russian police and military as an official militia force with government paychecks.

Just as in the days of the czars, the command structure of the modern-day Cossacks in Russia now leads directly to Russia’s Commander in Chief, who holds the exclusive right to award the rank of Cossack general. In March, during the Russian invasion of Crimea, thousands of Cossack fighters went with the Kremlin’s approval to aid the Russian military in the occupation of the peninsula. Some of them returned home after Crimea was annexed into Russia, while others moved on to eastern Ukraine to continue their campaign. “We decided to go conquer some more historically Russian lands,” says Alexander Mozhaev, one of the Wolves’ Hundred members now serving in eastern Ukraine.

In total, TIME saw at least a dozen fighters in their group, although the number seemed to fluctuate as new volunteers would arrive in the rebel-held towns of eastern Ukraine. One of them, a baby-faced young fighter who only gave his first name, Vlad, says he was captured in April by the Ukrainian security services and deported back to Russia. “I just made my eyes wide and said I don’t know anything about anything,” Vlad says of his interrogation. Once in Russia, he says he was easily able to sneak back across the border and rejoin his platoon. Mozhaev, whom TIME profiled last month, says he was allowed to pass through Russian border control in March despite being a wanted fugitive in his homeland for making death threats. “There’s an open corridor for the Cossacks, for the Wolves,” says Mozhaev. “They didn’t even stamp my passport.”

All of this points to the complicity, if not also the direct orders, of various branches of the Russian government in the Wolves’ Hundred campaign — from Russian border guards all the way up to the Kremlin Council for Cossack Affairs. But it would be difficult to prove that the Russian government explicitly sent these fighters to wage a war in eastern Ukraine. As an irregular paramilitary outfit, they would not have needed direct orders from the Russian armed forces, let alone the sanction of the Russian parliament, to participate in this conflict.

Their aim, as professed by the fighters themselves, is to destroy the state of Ukraine and absorb most, if not all, of it into Russia. “Write this down: There is no such thing as Ukraine,” says Mozhaev, who goes by the nickname Babay, or Bogeyman. “There are only the Russian borderlands, and the fact they became known as Ukraine after the [Bolshevik] Revolution, well, we intend to correct that mistake.”

Parroting the Kremlin’s propaganda, the men of the Wolves’ Hundred insist that they have come to fight the “fascists” who have taken power in Ukraine. But this claim marks a spectacular irony coming from them, as the founding father of the Wolves’ Hundred, Shkuro, was himself a Nazi collaborator during World War II.

In 1944, the commander of the Nazi SS, Heinrich Himmler, tapped Shkuro — who had become a circus performer and part-time actor during his years in Berlin — to become the head of the Cossack Cavalier Corps within the Nazi Wehrmacht. Shkuro was then given the rank of lieutenant general of the Nazi SS, and he commanded a force of about 2,000 men who fought on the side of the Germans in Yugoslavia. After the war, the British captured Shkuro and sent him to Moscow to stand trial for “acts of terrorism against the U.S.S.R.” and other crimes. His death sentence by hanging was carried out in the Soviet capital in January 1947.

Fifty years later, a Russian monarchist organization called For Faith and the Fatherland petitioned the Russian government to overturn Shkuro’s conviction and clear his name. The Supreme Court refused that petition in 1997, so in the eyes of the Russian state, the founder of the Wolves’ Hundred is still a Nazi war criminal. But in eastern Ukraine, his legacy and the banner he carried now serve the cause of Russian imperialism once again. 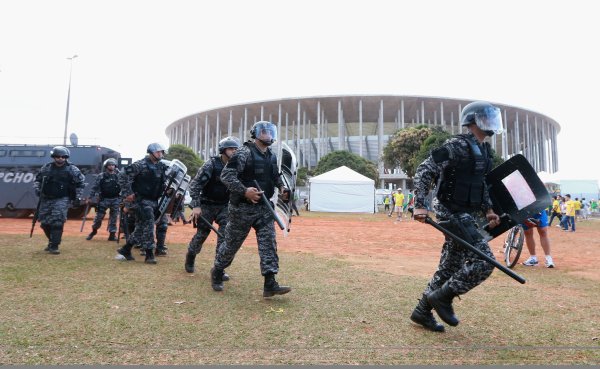 Brazil's Guide to Not Getting Mugged at the World Cup
Next Up: Editor's Pick