A man holds a sign that reads "Bring Back Our Girls" during a protest outside Nigeria House in London on May 9, 2014
Dan Kitwood—Getty Images
By Vivienne Walt / Lagos

With the U.S., Britain and France now involved in the search for hundreds of girls abducted by the Islamic militant group Boko Haram, Nigerians have begun to wonder whether a slow response by their own government could ignite an explosion inside the country. Their dissatisfaction is rooted in a sense that Nigeria’s missteps are a sign of greater disregard for the public good.

“It took the self-immolation of a Tunisian street trader to spark off the Arab Spring,” blogger Chris Ngwodo wrote in the Lagos newspaper ThisDay on Sunday, referring to the death in 2011 by Mohamed Bouazizi, which set off the Tunisian revolution, followed by revolutions in Egypt and Libya. In a similar way, he wrote, “the debacle [of the kidnapped schoolgirls] might yet unleash seismic repercussions.”

Ngwodo’s is just one voice in a rising chorus of Nigerians frustrated over their government’s seeming inaction and slow response. The girls vanished almost one month ago, on April 15, when Boko Haram invaded a boarding school in the remote northeastern town of Chibok. They forced an estimated 279 girls into trucks, and drove them into the forest; eight more were kidnapped days later.

On Friday, Amnesty International said its researchers had proof that local officials had been alerted about four hours before the April 15 attack, after people in neighboring villages said they witnessed Boko Haram gunmen moving toward Chibok, where the girls were writing their final high school exams. Though the alarm was raised, Amnesty reported, officials failed both to send military reinforcements and to attempt to move the girls to safety.

Amnesty said it had “multiple interviews with credible sources,” and called the government’s inaction “a gross dereliction of Nigeria’s duty to protect civilians.”

Seemingly unaware of the incident’s potential to set off an emotional chain reaction, Nigerian President Goodluck Jonathan waited two weeks before speaking publicly about the attack. He also rebuffed immediate offers of help from the U.S. and U.K., according to the Associated Press on Sunday. Jonathan — who is also Commander in Chief of Nigeria’s armed forces — finally broke his silence on May 1, calling the incident “horrific” and asking for foreign help.

But by then, it seemed too late. Boko Haram leader Abubakar Shekau released a chilling video on May 4 saying he intended to sell the girls, some as young as 9 years old, perhaps by trading them in Chad and Cameroon.

That fueled a global campaign, with #BringBackOurGirls trending on Twitter across the world. On Wednesday, U.S. First Lady Michelle Obama posted a photo of herself holding a sign with the slogan, and on Saturday she made her first-ever address from the White House, saying she and President Barack Obama were “outraged and heartbroken” by the girls’ situation. Pope Francis too tweeted about the campaign:

With four weeks having passed since their abduction, finding the girls will now be immensely difficult, especially given Shekau’s warning about selling them off.

Yet it is unclear what Western military help might accomplish at this point. U.S. Secretary of Defense Chuck Hagel told ABC’s This Week on Sunday that the U.S. is sending only military advisers, not soldiers. He warned that finding the girls “will be very difficult. It is a vast country.”

“This is not going to be an easy task,” Hagel said.

Still, in Lagos’ upscale neighborhoods — hundreds of miles and a world away from Boko Haram’s stronghold — several wealthy young people displayed red wristbands this weekend, part of the #BringBackOurGirls campaign. Other residents hammered posters to the railing of a traffic circle, each with the silhouette of a face and the name of one of the missing girls.

Boko Haram’s bloody campaign, which started in 2009, has accelerated sharply in recent months. Of the 4,000 or so people killed in the past four years, about 1,500 of them have died this year alone. The insurgency has barely let up since the girls disappeared last month, and it could well increase with the arrival of foreign advisers. The AP reported this weekend that insurgents had blown up a bridge in the area near the kidnappings, killing several people, and that they kidnapped the wife and two children of a retired police officer.

Boko Haram’s violence isn’t isolated to the far-flung areas of the country either. The group has claimed responsibility for a car bomb that killed about 75 people on April 19 in Nigeria’s capital, Abuja. A second bomb exploded close to the first site on May 2, and the Nigerian government blames Boko Haram for it too. That attack killed at least 12 more people, just days before the beginning of the World Economic Forum on Africa, hosted this year in Abuja.

President Jonathan and his government had planned for months to use the forum to show off Nigeria’s booming economy, Africa’s biggest since last month. Instead, the kidnappings dogged most conversations at the forum, and hundreds of heavily armed military and police surrounded the conference hotel and escorted visitors on transport buses. And rather than trumpeting his country’s success, Jonathan spent much of the three-day event defending his actions. On Friday afternoon, he told a small group of reporters — including TIME — that aircraft had been dispatched “immediately” after the kidnapping.

“If people give you the impression that the government is slow, that is not true,” he said. “That is not correct.”

Many Nigerians are unconvinced, however, and are now questioning whether the government has simply lost touch with its people. Blogger Ngwodo also stated in his article on Sunday that, beyond bringing back the girls, the government would need to work to “instill a culture of accountability.”

Easier said than done, perhaps. “Nigerians have never taken the regime very seriously. The government has never been proactive on any issues,” Sylvester Odion Akhaine, a political-science professor at Lagos State University, told TIME on Sunday. “That is the general perception.” 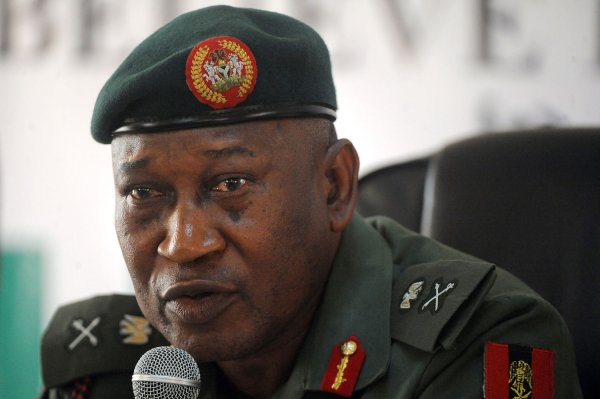 Nigerian Army Joins Search for Schoolgirls
Next Up: Editor's Pick