Newly elected Speaker of Parliament Oleksandr Turchynov speaks during a session of the Ukrainian Parliament in Kiev, on Feb. 23, 2014.
Yuri Maximov—EPA
By Nate Rawlings

Ukraine’s parliament signaled Tuesday that it will delay forming a new unity government until Thursday, as the country grapples with ongoing political tensions and economic challenges with parliament in charge after the president fled the capital last week.

Parliament speaker Oleksandr Turchinov, who is serving as Ukraine’s interim leader, announced on Tuesday that that a new government should be in place by Thursday, the Associated Press reports. The parliament sacked some of ousted President Viktor Yanukovych’s lieutenants, and has yet to name a new premiere and fill other top posts.

Turchinov has essentially been in charge of the country of 46 million since Yanukovych fled Kiev on Friday after signing a deal with opposition leaders that ended days of bloody protests in the capital. Law enforcement agencies issued an arrest warrant for Yanukovych for the killing of 82 people in the clashes in Kiev. The president’s whereabouts are unknown, but he is believed to be in the pro-Russian Crimea.

Ukraine’s crisis, which exploded in recent weeks, began late last year when Yanukovych rejected a trade pact with the E.U. in favor of closer ties with Russia, sparking protests from groups that want closer ties with Europe. Russian President Vladimir Putin sees Ukraine as the key to a potential Eurasian union with Moscow at the center, and Yanukovych has been a key Russian ally in that effort.

The country’s interim leaders met with E.U. foreign affairs chief Catherine Ashton on Monday, an attempt to steer Ukraine toward closer ties with Europe, while protesters in Crimea and other pro-Russia areas demonstrated against Yanukovych’s ouster. Turchinov spoke on Tuesday about fears of secession, calling separatism a “serious threat” to the country’s future, BBC reports. He said that the delay in forming a new government will allow for further consultations, adding, “a coalition of national faith must be elected.” 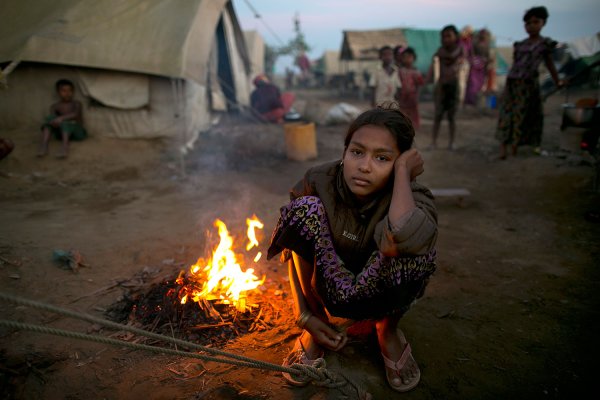 Burma Accused of ‘Crime Against Humanity’ Over Persecution of Rohingya
Next Up: Editor's Pick