For Michael Sam, It's Time to Move Past the Kiss

Two truths have emerged from Michael Sam’s selection in the NFL draft in the seventh round by the St. Louis Rams on Saturday. First: the prospect of an NFL draft pick breaking down and kissing his boyfriend on national television after being told that a team was about to select him seemed unimaginable, what, 10 years ago? Fifteen years ago? Five years ago? Acceptance of homosexuality has come a long way in this country, thanks in part to progressive legislators and courts that strike down discrimination and President Obama’s 180-degree turn on gay marriage. And a more open-minded populace. Now, the NFL has moved forward. The kiss symbolized all of that, and is a touchstone moment in American culture.

The other: there’d be some ugly responses. Let’s not confuse Twitter for a legitimate social-science research tool. But a quick search of Michael Sam and kiss on Sunday morning was predictably disheartening. There was some really nice stuff: former NFL offensive lineman Roman Oben, for example, weighed in with something poignant:

See, the idea of a sports moment transcending sports is far from a tired cliché.

But, the responses included “Ok, I don’t want to wake up and turn on sportscenter and watch Michael Sam kiss his boyfriend … eww” and “it’s weird and I don’t want to see that” and “I think I’m going to be sick” and even uglier comments.

So that’s what we know: Sam will both inspire and offend — hopefully, in 2014, the former much, much more than the latter. What we don’t know, now, is even more intriguing: Will Sam fit in with St. Louis? Both on the field and off the field? The locker room is a laboratory, and that’s why athletes like Sam and NBA player Jason Collins coming out is so important. Now we get to see, in the most macho of settings, if a gay athlete can “fit in.” In Collins’ case, so far, so good. He’s had little impact on the court for the Nets during their playoff run, which isn’t surprising: he’s an aging veteran with limited offensive skills. He hasn’t gotten time in a single playoff game. Jason Kidd, his former teammate and current coach, is benching Collins based on the merits. And the Nets locker room hasn’t imploded because a gay man joined the team. His presence is almost a nonstory at this point — which, in a way, is the best part of the Collins story. He’s gay, and so what?

Sam’s case is quite different. He’s just starting his career, and there’s no guarantee that he’ll even make the St. Louis roster. Football is the most violent, most militaristic — read, “manly” — and most popular American team sport. So if Sam’s sexuality causes little to no discomfort in an NFL locker room, people might feel more comfortable coming out in a host of other professions (Sam came out privately to his college teammates and coaches before last season, it’s worth noting, and Missouri did just fine).

And since Sam’s been drafted, we’ll at the very least get a glimpse into this locker-room lab. He’ll be at training camp. He’ll play preseason games. Will an NFL locker room accept a gay player? For the past few years, there’s been endless speculation. Now, we’ll at least get a partial answer.

Maybe Sam makes the team and becomes a key contributor. Then we’ll have a much fuller answer. We can only hope, like with Collins and the Nets, Sam plays, or doesn’t play, based purely on the merits. 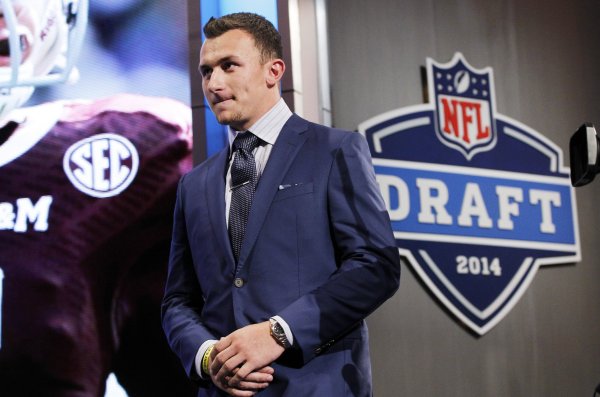 Manziel Learns Some Humility
Next Up: Editor's Pick