REVIEW: Godzilla: The Monster Gets a Reboot, and the Filmakers Booted It

The trailers — here, here and here — were great. They showed glimpses of devastation: a long trough of earth clawed by some huge beast on its way to the sea; a high-rise building with a bite taken out of it; the Statue of Liberty missing its raised arm. We saw flashes of You Know What, the Big G, as flare guns briefly illuminated its scales, plus the metallic crab foot of another giant creature crashing onto the street of a city it was in the process of leveling. The sound track crackled with prehistoric roars, a keening choir and the urgent warnings of scientists in the know. “You have no idea what’s coming!” Bryan Cranston screams. “It is gonna send us back to the Stone Age!” Sally Hawkins, when asked if this It is a monster, whispers, “No. A god.”

Even a movie critic is allowed to hope. This one dared dream that English director Gareth Edwards, whose only previous feature was the low-budget post-apocalyptic sci-fi film Monsters, might show the same ingenious savvy in updating the Godzilla brand that Rupert Wyatt, also from the Brit indie scene, displayed with the 2011 Rise of the Planet of the Apes — a witty rethinking of, and improvement on, a venerable fantasy franchise. If ingenious simians could be reborn, why not a dinosaur awakened from a hundred-million-year snooze by nuclear tests?

(READ: Corliss’s paean to Rise of the Planet of the Apes)

Ishirô Hondo’s original Gojira opened in 1954 and was released a year later in an Americanized version as Godzilla: King of the Monsters. (Nice coinage, by the way: God + gorilla, to link him to King Kong.) Surfacing from his cold, deep storage, this 200-ft.-tall metaphor for Atomic Age anxiety snacks on fishermen from remote islands, then comes to Tokyo to be a star, carrying all the modern star’s baggage: nasty disposition, need to demolish things, insatiable appetite for mischief. The big brute spawned 27 Toho sequels, in which he devolved into a friend and defender of children, and a 1978 animated series from Hanna-Barbera. Twenty years later, director Roland Emmerich (Independence Day) imported him to New York City — an expensive, lazy remake. Somebody figured that for the first film’s 60th birthday, the mutant deserved to live again, in all raw majesty.

Nope. Edwards’ Godzilla dawdles toward its Doomsday climax; the movie could win a prize for Least Stuff Happening in the First Two-Thirds of an Action Film. The title character looks imposing, in the CGI work of Peter Jackson’s Weta Digital sorcerers, but the movie is often so dark, using a palette of gray and brown, as if coasted in rust, that he’s hard to see. (The sound effects do most of the scary work.) And he gets little screen time. Godzilla isn’t even the main monster: he is the referee, rival or enabler — we won’t say which — to a pair of other creatures. And the human drama, mostly involving Joe Brody (Cranston), his wife Sandra (Juliette Binoche) and his son Ford (Aaron Taylor-Johnson), never clicks. The problems of these three little people don’t amount to a hill of beans when San Francisco is getting Sanforized. (No spoiler alert needed for the news that the creatures never get to New York Harbor to disarm Lady Liberty.)

David Callaham, who scripted Sylvester Stallone’s first Expendables movie, wrote this film’s story, which was poked and polished by a trio of pricey scribes: David S. Goyer (The Dark Knight, Man of Steel), Drew Pearce (Iron Man Three) and Frank Darabont (The Shawshank Redemption, The Walking Dead). The only screenplay credit goes to Max Borenstein (Swordswallower and the Thin Man — no we haven’t seen it either), but the movie carries echoes of the debate that must have gone on during rewrites. We have an iconic monster, but what’s he to do? And: How can we get audiences to care about the humans fleeing from him? The final film doesn’t answer those questions, doesn’t fill the two-hour running time. It’s a concept lacking a magnetic story, a package without a product.

In 1999, Joe Brody is the sensitive American sensei at a Japanese nuclear power plant. An unknown catastrophe requires the plant to be shut down, endangering Joe and Sandra and leaving their young son stranded. Fifteen years later — right now — Ford is an Army officer with expertise in bomb disposal, and Joe is still pursuing his conspiracy theory about the cause of the plant meltdown. Like Kevin McCarthy in the 1956 Invasion of the Body Snatchers, which matched Gojira as a vibrant Cold War parable in sci-fi garb, he is the lone sane man in a world myopic to the truth; his research got him a serious prison term. When Ford comes to Japan to get Joe out of jail, father persuades son to join him in the supposedly radioactive waste of his 1999 life. Back home, Joe’s wife Elle (Elizabeth Olsen) had reassured him with a smiling “It’s not the end of the world.” But she doesn’t know she’s in a disaster movie. Joe does, and now Ford agrees with him.

(FIND: Gojira and Invasion of the Body Snatchers on TIME’s list of Top 10 ’50s Sci-Fi Films)

I may have erred by making the emotional dialectic of this Brody family seem as fraught and compelling as that of the Brody clan in the first two seasons of Homeland. This one is strictly formula, plus shouting. Cranston plays Joe with so much high-decibel huffing and such a preposterous hairpiece in the 1999 scenes that the Emmy committee may consider rescinding his Breaking Bad awards. And Taylor-Johnson, the young English actor so fine in Nowhere Boy, Kick-Ass and Anna Karenina, can invest only the terse strength of a War on Terror combatant. (Toward the end we learn he’s the only bomb-disposal expert available to the Army in all of Northern California.) When not fighting to keep the world from ending, Ford is shepherding lost children out of peril — the cheesiest stratagem for an audience’s sympathy.

But you’re no more interested in the people than the screenwriters were. You want to know: What about the new monster? That’s the Muto (for Massive Unidentifiable Terrestrial Organism), a flying insect that snacks on radioactivity, looks like a spawn of H.R. Giger’s creature from Alien — in other words, like most sci-fi creature villains since that 1979 classic — and has an appetite for destruction. But no personality, for all its ferocious power in demolishing property values. The Muto could be an earthquake, a hurricane or a tsunami, on stilts. But when the creature eventually finds a mate, it provides the movie with its one fabulous weird moment. For purposes of reproduction, the male gives the female a nuclear warhead, which she inserts inside her body — leaving the moviegoer to wonder: Is she using the warhead as a suppository or a dildo?

The two Mutos, you see, were born in the 1950s near sites of atomic testing: the male in Japan in 1954, as collateral damage from a deep-sea mission by the U.S.S. Nautilus, the first nuclear-powered submarine; and the female in Nevada, where the government tested its H bombs. References abound to other nuclear events, from Hiroshima in 1945 to the Tohoku quake and tsunami three years ago. Plenty of action films have exploited the World Trade Center nightmare. This one leaps halfway around the world, and a decade ahead, for a different tragedy: from 9/11 to 2011. Either way, these movies say, it’s all our fault. As Godzilla scientist Ken Watanabe notes, “The arrogance of man is thinking nature is in our control, and not the other way round.”

All these political implications are for screenwriters and critic to purr and wrangle over. Every other moviegoer just wants to see the end of the world threatened and averted. This coming weekend, with that simple pleasure in mind, millions will be off to see the lizard. I may be in the minority: disappointed by Godzilla because the trailers teased me into expecting too much. Anyway, I’ve decided to bide my time and stoke my fervor for the next Nature’s Revenge movie: the Matt Reeves’ sequel, Dawn of the Planet of the Apes, due July 11th. My spring optimism proved groundless; but for this critic, hope summers eternal. 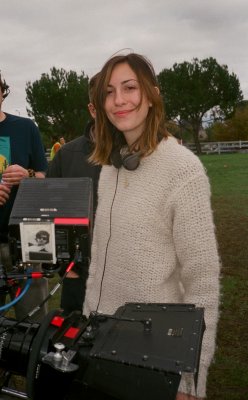 This Is What It's Like to Be the Newest Coppola Director
Next Up: Editor's Pick