Emergency personnel carry a casket draped with a U.S. flag during the ceremonial transfer of the 9/11 unidentified remains to the Office of the Chief Medical Examiner of the City of New York (OCME) repository at the World Trade Center site, in New York May 10, 2014.
Eric Thayer—Reuters
By Sam Frizell

Unidentified remains of those killed in the September 11, 2001 attacks in New York City were returned to the World Trade Center Saturday in a somber morning procession.

Few bystanders gathered for the five-mile procession, which began at the Office of the Chief Medical Examiner on Manhattan’s East Side, where the remains were previously kept. Some construction workers near the World Trade Center paused to pay their respects and a small number of firefighters saluted the vehicles as they arrived at the site, the Associated Press reports.

The remains will be stored in an underground repository in the same building as the National September 11 Memorial Museum, which will help to coordinate family visits. Some victims’ family members gathered at the World Trade Center site Saturday in protest, saying the remains should be stored above ground at a separate monument.

Some officials hope that technology improvements could lead to the eventual identification of the remains.

2,753 were killed in the attacks at the World Trade Center. 41 percent of the victims have not yet been identified. 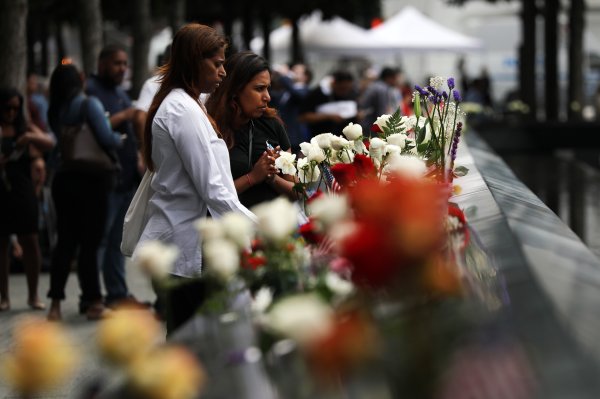 Why This Is the Hardest 9/11 Anniversary of Them All
Next Up: Editor's Pick