Dubbed the most powerful drug trafficker in the world and eluding arrest for more than a decade, police finally got the man known as “El Chapo” over the weekend. Take a look at how U.S. and Mexican authorities found Joaquin Guzman.
Getty
By Denver Nicks

Mexican drug lord Joaquin “El Chapo” Guzman has been officially charged with drug-trafficking in Mexico, the country’s Federal Judicial Council announced Monday. The decision to charge him in Mexico makes the possibility he’ll be extradited to the United States anytime soon unlikely.

A judge has until Tuesday to decide if Guzman, who was arrested in Mexico Saturday, will stand trial now or be released, the Associated Press reports. Officials said Guzman’s arrest came as a result of U.S. intelligence collected via wiretaps. Observers expect the judge to opt for a trial, though Guzman has the right to appeal that decision and drug lords in the past have used that tactic to string out extradition appeals for months or years.

Guzman, who escaped a Mexican prison in 2001, is likely to be charged with additional crimes. The issue of whether to hold him in Mexico or send him to a more secure facility in the U.S. is a sensitive one for Mexican President Peña Nieto, who has sought to establish more control over the anti-drug programs the two countries operate together. 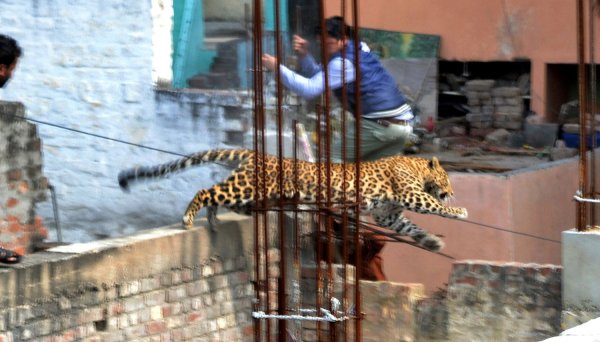 Leopard Runs Rampage in Indian City
Next Up: Editor's Pick