Now that Johnny Football has been drafted — some team finally did select him, right? Manziel’s not still chugging water at that table? — all eyes turn toward Michael Sam. Usually, the second through seventh rounds of the NFL draft, which ESPN and the NFL network will broadcast tonight and Saturday, are only of interest to die-heard fans. (And plenty of them will stay inside on a lovely spring Saturday, to see whom their favorite team snares in the fifth round. Drama!)

But this year, the later rounds offer intrigue for a much broader audience. Which team, if any, will take Sam, who would become the first active openly gay player to suit up for an NFL franchise? The consensus — which comes with a giant disclaimer, since many anonymous scouts make a living telling strategic lies to NFL reporters — is that Sam will be taken between the fifth and seventh rounds on Saturday, or quite possibly not at all. Bob McGinn, the highly-respected NFL writer from the Milwaukee Journal Sentinel, polled 21 scouts from around the league, and asked where they think Sam should go.

Sam, the SEC defensive player of the year, has a real problem. He’s a classic tweener: potentially not big and strong enough to play on the defensive line, where he started at Missouri, but not fast enough to play linebacker in the NFL. But Sam, who’s listed at 6-ft., 2-in. and 261 pounds, has improved his 40-yard dash time, vertical leap, bench-press reps, and Wonderlic intelligence test this spring.

If Sam’s name isn’t called over the next two days, expect a flood of hysterical questions and forced debates. Did teams pass on him because of his sexuality, and use his lack of size and speed as a convenient excuse? Did they not want the media “distraction” that would accompany Sam, wherever he goes?

Before rushing to call out NFL execs as bigots, however, consider: whether he’s drafted or not, Sam will get his chance to show a NFL team he can play.

Because worst case, some team will invite Sam to camp as an undrafted free agent. Here, I’ll trust those five scouts in McGinn’s poll who said they would sign him. It would be crazy for no team to at least give the SEC player of the year a look in camp. From a pure football perspective, it’s a low-risk, potential high-reward move. The list of undrafted free agents who later became stars is impressive, and includes Houston Texans running back Arian Foster, ex-NFL MVP Kurt Warner, and New York Giants wide receiver Victor Cruz, who signed a luscious five-year, $43 million contract extension with the team last summer.

So if you’re a Sam fan, or are just rooting for his social message — a gay player can be accepted in the most “manly” American team sport — don’t freak out if his name isn’t called. If no NFL team extends Sam an invite to camp, that’s when things get fishy. That would reek of weakness and bigotry. 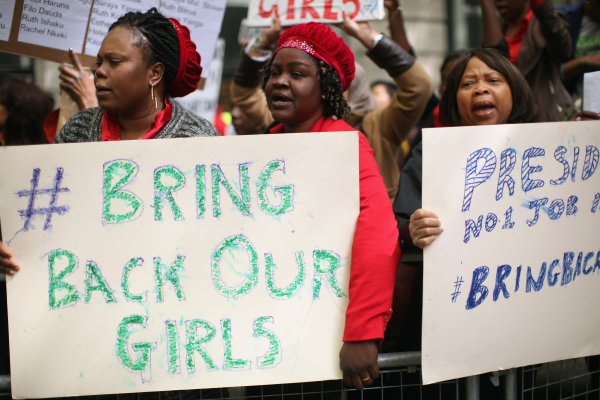 #BringBackOurGirls: Hashtag Activism Is Cheap--And That's a Good Thing
Next Up: Editor's Pick