The Muslim Brotherhood Struggles in a New Egypt

The Muslim Brotherhood is no stranger to official repression. The venerable Islamist organization has been subject to regular government purges for most of its 86-year history. Along the way, the Brotherhood has developed a resilient and adaptable command structure—one designed to withstand the arrest of multiple members of its senior leadership.

But even for an organization accustomed to operating outside the law, the group’s current circumstances are unprecedented. The military’s ousting of longtime Brotherhood official Mohamed Morsi from the presidency last July has yielded the most challenging phase in the group’s existence. As Egypt heads for a late-May presidential election—one widely expected to be a forgone-conclusion victory for former Defense Minister Abdul Fattah al-Sisi—the Brotherhood finds itself scattered, suppressed, weakened and politically isolated even from other non-Islamist opponents of military rule.

The monolithic Islamist organization that dominated the first two years after the 2011 revolution has been purged from public life on a scale that hasn’t been seen since 1954 under Gamal Abdel Nasser.

“If we compare numbers and casualties, it’s much worse than even Nasser,” said Dr. Islam Abdel Rahman, a former political advisor to the Brotherhood-affiliated Freedom and Justice Party—also now banned.

The vast majority of the Brotherhood’s senior leadership have been jailed, including Supreme Guide Mohammed Badea, his deputy Kheirat al-Shater and much of the decision-making Guidance Bureau. Brotherhood officials estimate that at least 16,000 alleged street-level members remain jailed. Hundreds of Brotherhood members have already been sentenced to death, including Badea himself, although all of those sentences still face an appeals process.

As the crackdown has deepened—the Brotherhood was officially declared a terrorist organization in December—what remains of the Brotherhood’s senior leadership has scattered into a sort of multi-polar Islamist diaspora centered in Istanbul, London and the Qatari capital of Doha.

Observers and allies of the Brotherhood say the group’s short-term strategy has settled into a modified waiting game: keeping up the street-level pressure inside Egypt with ongoing protests, while biding its time, waiting for Sisi’s popularity to wane and marshaling support inside and outside of Egypt.

The shattering of the Brotherhood’s ranks has already wreaked havoc with the group’s once-renowned discipline and command structure. But supporters of the group insist its decision-making structure endures.

“The top three tiers are gone, so tier four moves up,” said Dr. Wael Haddara, a former political advisor to deposed president Mohamed Morsi. Haddara, like Abdel Rahman, denies he is an actual member of the Brotherhood, but he remains in contact with the remaining senior officials and has acted as one of the group’s ambassadors in meetings with foreign governments. “From what I understand, the hierarchy is still very much intact,” he said. “The communications have had to devolve to more low-tech and more secure methods. I don’t think [Brotherhood leaders] are sending a lot of emails.”

One of the key aspects of Brotherhood strategy going forward is also one of the hardest: forging alliances with other revolutionary elements opposed to military rule. But those secularist revolutionary forces are exactly the people that the Brotherhood alienated over the course of Morsi’s divisive and polarizing year in power.

Morsi’s reign—particularly the brutal struggle to push through his controversial constitution—burned virtually every bridge between the Brotherhood and Egypt’s more secular revolutionary forces. By the time al-Sisi launched his popularly backed coup, Morsi’s support had shrunk down to the Brotherhood’s absolute hardcore loyalist base and the group had alienated just about every non-Islamist who might defend them.

Nine months later, that political isolation remains, despite the Brotherhood’s ongoing attempts to repair those alliances and rally support. The Anti-Coup Alliance—the closest thing to a public Brotherhood support base on the ground in Egypt—remains almost entirely made up of Islamist parties and factions; attempts to forge fresh alliances with secularist groups have been consistently rebuffed.

In the wake of the coup and the violent August clearing of a Brotherhood sit-in protest outside Cairo’s Rabaa Adaweya mosque, the group has reverted to its original revolutionary rhetoric—casting itself as the defender of the principles of the 2011 revolution and the true opponent of military rule. It’s a strategy that so far has prompted eye-rolling from secular revolutionaries, who view the Brotherhood as having betrayed those principles at almost every opportunity in the course of a cynical and disastrous power grab.

“The [Muslim Brotherhood] made a decision starting with Rabaa to throw in their lot with the revolution,” Haddara said. “Clearly not everyone on the revolutionary spectrum appreciates that position or are onboard with it.”

Haddara, an emergency room doctor who now lives in Canada, said many of those secularist revolutionaries are essentially waiting for a series of public apologies before they will even deal with the group again. If so, they’re likely to keep waiting. The group, in recent months, had begun internally debating the mistakes and missteps of the Morsi era, Haddara said. But those discussions are so far being kept behind closed doors.

“It’s happening now,” he said. “I’m hearing more and more self-criticism. The question is: Is making these discussions public something that’s going to help Egypt or do the opposite?”

A key element of the Brotherhood’s short-term strategy has involved simply laying low and letting the current military-backed government do its work for it by alienating original supporters of the coup against Morsi. Brotherhood officials and allies have barely restrained their public glee at a series of government missteps and blunders—including the recent death sentences against more that 500 Brotherhood cadres in a trial that lasted two sessions and the internationally-mocked, military-backed announcement of a cure for AIDS and Hepatitis C.

“I laughed my ass off,” when the bogus AIDS cure was announced, said Hamza Sarawy, a spokesman for the Anti-Coup Alliance.

But while those missteps may serve to turn some Egyptians away from the military, that alienation doesn’t necessary translate into a willingness to stand alongside the Brotherhood. As Egypt shows every sign of striving to move on without the Brotherhood, the group’s remaining supporters will have to find a way to heal that deeply personal and bitter rift if they want to truly emerge from the political wilderness.

“We are offering our hand. Each side has done a lot of damage to the other side,” said Abdel Rahman, who now lives in the U.K. “Each side needs to make a leap of faith.”

Ashraf Khalil is a Cairo-based journalist and author of Liberation Square: Inside the Egyptian Revolution and the Rebirth of a Nation. 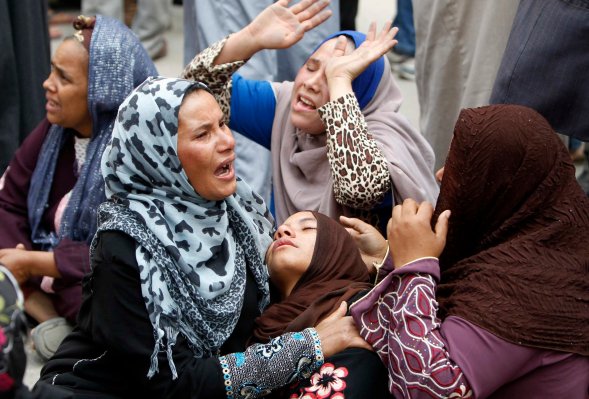 Egyptian Court Doles Out Death
Next Up: Editor's Pick