Q&A: The Man Who Wants To Split California Into 6 States

This week, the California Secretary of State’s office gave initial approval to a proposal that would split the Golden State into six new ones: Jefferson, North California, Silicon Valley, Central California, West California and South California. If proponents can gather 807,000 signatures by July 14, the question will go to voters in November.

The man behind the “Six Californias” plan is big-name venture capitalist Tim Draper, known for investment in companies like Hotmail and Skype. TIME spoke to Draper about where this idea came from, how he decided on six states and whether there are any political ambitions behind his novel effort. Here’s an edited transcript of the interview:

Where did this idea come from?

We now spend the most and get the least. We spend among the most for education and we’re 46th in education. We spend among the most for prisons, and we are among the highest recidivism rates … So the status quo is failing. And there have been some very good people running California, governing California. So it must be systemic. At best, the system seems to be on a spiral down. At worst it’s a monopoly, and in a monopoly, they can charge whatever they want and provide whatever service they want. In a competitive environment, people get good service and they pay fair prices.

So you see the current state government as a monopoly?

Yeah. … The strongest argument for Six Californias is that we are not well-represented. The people down south are very concerned with things like immigration law and the people way up north are frustrated by taxation without representation. And the people in coastal California are frustrated because of water rights. And the people in Silicon Valley are frustrated because the government doesn’t keep up with technology. And in Los Angeles, their issues revolve around copyright law. Each region has its own interest, and I think California is ungovernable because they can’t balance all those interests. I’m looking at Six Californias as a way of giving California a refresh and allowing those states to both cooperate and compete with each other.

Do you think some of these factors you mention, like attention paid to copyright law, might seem like rather small problems for such an extreme, potentially expensive solution?

Actually, I think the real extreme and the real expense problem is what’s going on now.

You mentioned all these various desires of people in different areas. Have you spoken to people in each of these six regions who support this plan?

Yeah. I get a ton of emails of support. People are supporting this all over … What I’ve noticed is that at first, people hear it and they go, ‘Why would you do this? This is California. This is America.’ And then I say, ‘This is exactly why I do this. Because I love California, and I love America.’ We are the government. We the people, are the government. And we need to create a system that works.

You said in another interview that if the government of California served residents the way that Google serves employees that it buses down from San Francisco to Silicon Valley, that you wouldn’t have proposed this. Can you expand on that?

They were asking specifically about the attacks on the Google buses. And so I said, look, the whole thinking is if California were able to provide the kind of service that it should be able to provide for the costs that they spend, then I wouldn’t feel this obligation. But there is an additional benefit of being six Californias, in that we will be closer to our government. Our government will be more in touch with our individual constituents.

Presumably the state’s needs you are most familiar with is Silicon Valley, where you would reside. How much of your inspiration for this proposal was about that area being its own state?

I’ve always had a real interest in California, and I’ve always had an interest in how to improve the state. I live in the Silicon Valley, but I have business interests all over the world. So I do visit all different parts of California, so I’m interested in the whole, not necessarily any individual part. I love the energy and technology that comes out of the Silicon Valley, but I believe that when these six Californias come together, that we will all be surprised at how much innovation and spirit comes out of all six of these states.

How would you like to see things done differently in Silicon Valley, if it had its own government?

The issues of Silicon Valley are things like when Napster came out. No one knew how the law should be handled. It was a new technology. And no one quite knew whether it had some violation of copyright or not … And the people who were making those decisions were very distant, and not familiar with what Napster was. Now we have Bitcoin. We have very uncertain laws around Bitcoin. I believe if there were a government closer to Silicon Valley, it would be more in touch with those technologies and the need for making appropriate laws around them. Silicon Valley is seeing great frustration. They see how creative and efficient and exciting life can be in a place where innovation thrives, and then they see a government that is a little lost.

In the state’s legislative analysis, they pointed out that Silicon Valley would become the richest per capita state in the U.S. And another part of California would become the poorest. What about the issue of income inequality this would create among states?

The issue is very interesting. For one thing, I’ve noticed that the people most adamant about creating their own state or being a part of their own state are the poorest regions, and in the current system, they are not happy, because it is not working for them. So if they had their own state, I believe all of those states would become wealthier. And I believe by managing their own state, they will become much more successful. A lot of those regions are rural, and they feel they’re being unduly influenced by the urban population.

Why six states, rather than four or five or seven?

Well, seven is a question. We did consider five and we did consider more than six. We felt that we needed at least enough states so there could be this cooperative, competitive environment where each of the states could watch and benefit from the actions of the others and each could compete for their constituents and their counties. A lot of people have asked me why not two or three? My belief is with two or three you’d end up with the same kind of environment, where you’d end up with two monopolies or three monopolies.

When you say “we,” who worked on the proposal?

I’ve worked with quite a few of these biggest experts in the world in constitutional law, in political thinking, in demographics, in water rights. It’s come after a lot of research and a lot of work.

Can you give an example of someone you’ve worked with?

I’ll let them talk for themselves. My goal is to get this put on the ballot and then allow Californians to see what it could do for them.

What does California have as a whole that it would lose when broken into parts?

There’s some feelings people have of being Californians, although when I’m generally talking to people, they make it specific. ‘I’m from Southern California. I’m from Northern California. I’m from Central Cali.’ People’s identity might be an issue. But once they get over that, I think they’re going to start thinking, ‘What would my state look like? And what could be better? And how should it be governed?’ And then it’s just a matter of doing crowdsourcing on what the flag’s going to look like and what the state bird is and what the state constitution looks like. The Internet has disrupted a lot of industries and it has changed a lot of things, and I think that it might be not a bad idea to have six fresh states that can respond well to this new world we live in.

What about something like clout on the international scene that California has as a result of being this giant, powerful whole?

How do you think having these new states, and presumably so many more senators and different leanings, right and left, would affect the American political landscape?

I know a lot of people are thinking about that. I actually think that once California has created six new states, my guess is that New York will create three and Texas will create five. We might end up with a total of 60 states. If we really think about the world in two political parties, I think we are missing something … I personally have become an Independent, I don’t really pick a political party anymore.

Even if California approves the measure, how likely do you think it is that Congress and the president would pass and sign a law approving the separation?

I think if Californians really desire to have six states, the whole national scene will starting looking at what really is a better way of government. And if all 30 million people feel this is what they want to do, it would be fairly difficult for a president to deny that.

Presumably you’re gearing up now for gathering signatures. Will you be donating or gathering money to support those efforts?

Actually, we are deciding whether to go for 2014 or 2016 on this. It’s a heavy topic and it affects a lot of people, and people have to bring it into their consciousness. We’re thinking that it may be 2016, but we haven’t made a final call on that … I’m very serious about it. It really has to be a grassroots effort, and that’s the way we’re going to focus the campaign.

What are potential drawbacks to this proposal? What could go wrong?

Have you discussed this proposal with the current governor, Jerry Brown?

And what did he say?

If all this proposal does is start a conversation and never becomes a reality, will you consider that a success?

I’ve got a mission now. And I can’t think about it that way.

Do you have any ambitions to run for elected office, if this proposal becomes a reality or otherwise?

Oh, no. Oh, no. I’d let all the states run themselves.

So no plans to be part of the future Silicon Valley state’s government? 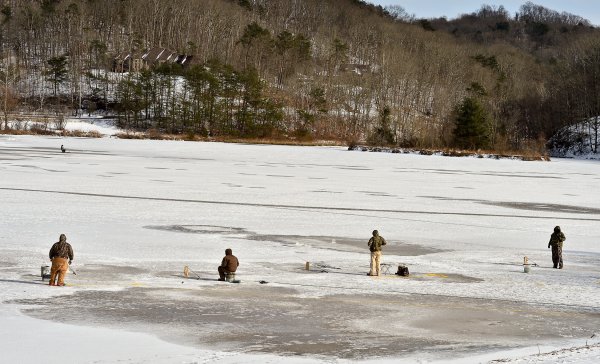 Here Are America's 5 Most Miserable States
Next Up: Editor's Pick