Joaquin "Shorty" Guzman is escorted by soldiers during a presentation at the Navy's airstrip in Mexico City Feb. 22, 2014.
Henry Romero—Reuters
By Sam Frizell

Mexican authorities confirmed that Joaquin “El Chapo” Guzman, head of the Sinaloa cartel, was arrested at a hotel in Mazatlan, Mexico, bringing a likely end to one of the most storied drug trafficking careers in recent history.

Guzman is on the Drug Enforcement Agency’s most wanted list and faces multiple federal indictments in the U.S. for controlling a drug empire that stretches throughout North America to Europe and Australia.

Attorney General Eric Holder congratulated the Mexican authorities on Guzman’s arrest. The apprehension was “landmark achievement, and a victory for the citizens of both Mexico and the United States,” he said. “The criminal activity Guzman allegedly directed contributed to the death and destruction of millions of lives across the globe through drug addiction, violence, and corruption.”

“El Chapo,” Spanish for “shorty,” escaped from a high-security prison in 2001 in a laundry truck and went on to grow his fortune to more than $1 billion, with aggressive plays for power in Tijuana and Ciudad Juarez leading to pitched battles and bloodbaths that made the cities two of the most dangerous in the world.

Since former President Calderon sought mobilized army units gain control of drug hotspots, more than 70,000 people have been killed in drug violence in the country. 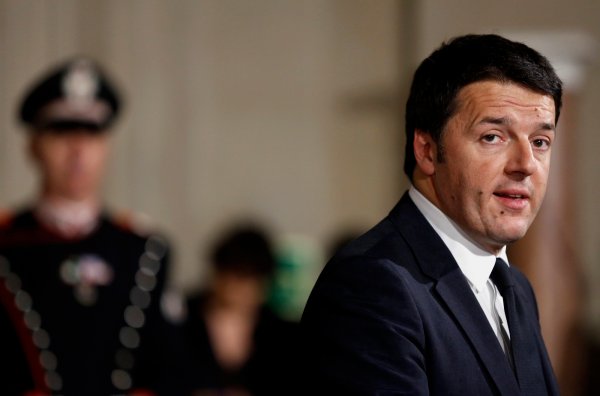 Italy's Youngest Ever Prime Minister Takes The Reins
Next Up: Editor's Pick