Meet The Two Candidates Taking on Assad For Syria's Presidency

It takes a certain kind of chutzpah to campaign against Syrian President Bashar Assad. Yet when the 2014 presidential election was thrown open to outside entrants for the first time in Syria’s history late last month, 24 would-be candidates nominated themselves to the post. Until now, the vote for Syria’s president has always been a yes or no referendum, first for Assad’s father Hafez, and then for Assad himself. That all changed earlier this year when Syria’s parliament decided to let in some competition for the presidential elections set to take place on June 3. By the time Syria’s judiciary vetted the nominees according to stringent criteria—candidates must be Muslim, must have lived in Syria for the past 10 years (conveniently disqualifying exiled opposition figures) and must have the support of at least 35 members of the 250-strong parliament—only two remained.

The revelation that candidates Maher Abdul-Hafiz Hajjar, 46, and Hassan bin Abdullah al-Nouri, 54—little-known lawmakers whose names drew much head-scratching inside Syria—made the cut elicited guffaws from members of the main opposition umbrella group, the Syrian National Coalition. They believe the candidates are patsies and proof that this election, like all those before it, will be a “farce.” In a May 7 address to the Unites States Institute for Peace in Washington, D.C., Ahmad Jarba, leader of the SNC, said the election was taking place “on the dead bodies of Syrians,” and would give Assad “license to kill for many years to come.”

With less than a month to go, campaigning isn’t exactly in full swing—the streets of Syria’s main cities are adorned with posters praising Assad, and little else—but speculation is fevered. There is no question Assad will win, say Syrians, but by how much? In 2007, he got 97.6 percent of the ballots (2.2 percent of the votes cast were considered invalid). With two other candidates in the running, the vote will likely be divided in a way that casts some legitimacy on the process.

On May 6, one of the unsuccessful candidates was kidnapped by anti-government rebels and paraded in a video posted to opposition social media sites. Clearly under stress, and flanked by two armed men, army colonel Mohammad Hassan Kanaan said that he had been coerced into nominating himself for the presidency by his commanding officer under threat of death. In further questioning by his captors, he said that other nominees had been similarly pressured to run. “It’s a political game and media fabrication,” he said.

It is impossible to know if Kanaan was speaking the truth or succumbing to pressure on the part of his captors, as government officials assert, but his statement further confirms some Syrians’ suspicions that Assad’s rivals have no real aims for the presidency but are there only to plump up an anemic field to legitimize the race. The elections may yet reveal interesting results, especially considering that nearly half the population has been displaced, and voting will not take place in opposition controlled areas. In the meantime, a look at the two men brave enough, or foolish enough, to take on Syria’s president:

Maher Abdul-Hafiz Hajjar, a former communist parliamentarian from Aleppo, was the first to nominate himself for the presidential post, and seems to take the campaigning seriously. Sort of. On his official Facebook campaign page he takes on calls from Syria’s minority Christian population to boycott the vote given that Christian candidates are excluded from running according to the country’s constitution. “Let’s speak frankly,” he admonishes his audience. “Christians in Syria have been neutral and they have not offered anything to this country in its struggle against the conspiracy… Thus, they can’t ask for a Christian president.” Calling Christian demands for the right to run “illogical,” he goes on to promise that if elected, he will guarantee all Christians “more rights.” He concludes with an exhortation to “Vote for #Maher_president_for_Syria so all sects and factions can enjoy religious freedoms.”

Hassan bin Abdullah al-Nouri, a former member of Parliament from Damascus, is significantly more obscure. Like Hajjar, he is a member of Syria’s officially tolerated opposition. Educated in the United States, he has two masters degrees—one in management from the University of Wisconsin and another in human resources development from John F. Kennedy University in California, according to state television. He was the second candidate to post his nomination, yet he doesn’t appear to have any campaign platform at this time.

–With reporting from Hania Mourtada/ Beirut 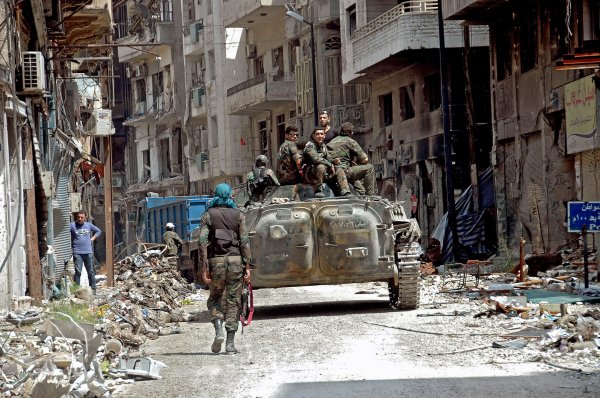 Syrian army moves into Homs
Next Up: Editor's Pick