What The Arrest Of 'El Chapo' Means For Mexico

Even as Mexican drug kingpin Joaquin “Chapo” Guzman had a $5 million reward on his head, his name could be heard in dozens of so-called drug ballads, played from Guatemala to the U.S. border, and especially in his home state of Sinaloa. Over a polka-like beat and earthy accordion melody, the verses celebrate how the short man from a ramshackle village in the mountains escaped a high security prison and beat back the Mexican army and U.S. Drug Enforcement Administration to make his billions smuggling cocaine and marijuana to Americans. “Many ask how it is possible that a Mexican, has made fun of the gringos, who are meant to be so clever,” it says in one song, written by Los Nuevos Rebeldes. However, Guzman’s 13 year run of outwitting authorities crashed to an end Saturday. Mexican authorities announced they had nabbed Guzman at the Sinaloan seaside resort of Mazatlan, before parading the haggard-looking gangster in front of reporters in Mexico City.

The detention was celebrated by Mexican and U.S. officials as a mighty blow against the drug cartels, whose infighting and wars with the army and police have left more than 70,000 dead in Mexico since 2006. “This is the most significant arrest of a drug trafficker in decades,” Mike Vigil, the former head of international operations for the DEA, told TIME. “Chapo Guzman was definitely the biggest trafficker in Latin America, and in my opinion in the world.”

However, on the streets of many Mexican cities that have been wracked by violence, people wondered what repercussions the arrest might bring. “It is like time has stood still,” journalist and author Javier Valdez said by phone from Sinaloan state capital Culiacan. “There is a feeling of uncertainty, a worry of what could come next.” Valdez, who has chronicled the lives of Sinaloa’s drug world in several books, said that some in the state see Guzman as the hero celebrated in their songs. “A lot of people here have no faith in politicians or the system that gives them nothing. Chapo is seen as a success story.”

Guzman’s strongest base of support is in the mountainous Sinaloan municipality of Badiraguato where he was born. The area is part of the so-called Golden Triangle and has been producing opium for Americans since Washington first restricted it in 1914. In villages hanging on the edge of the Sierra Madre, many residents call drug traffickers “valientes,” or brave ones, while they often refer to soldiers with disdain as “guachos,” or servants. Residents claim they have seen Guzman appear in villages, handing out wads of bills to needy mothers and loyal toughs.

But other Mexican communities have seen the trail of blood left by gunmen who fought in the name of Guzman. The druglord’s Sinaloa Cartel battled along the entire 2,000-mile Mexican border for space to smuggle marijuana, heroin, cocaine and crystal meth to a U.S. drug market estimated by the United Nations to be worth about $60 billion a year, half of which is believed to go to Mexican gangsters. Squads of assassins used assault rifles and grenade launchers to protect Guzman’s empire. At one scene in Nuevo Laredo in 2012, 14 bodies were hung from meat hooks, along with a note signed, “Attentively, Chapo. Remember I am your real daddy.”

With the arrest of Guzman, there is concern that junior lieutenants could fight to take over the Sinaloa cartel empire. The cartel’s second most powerful figure Ismael “Mayo” Zambada is a veteran trafficker in his sixties, who is believed to have distanced himself from the cartel wars of recent years. “Zambada is trying to avoid arrest himself, so it will be hard for him to exert control,” Vigil said. Another fear is of rivals pushing into Chapo’s territory. The Zetas, whose territorial bloodshed has reportedly left mass graves with hundreds of bodies, have long fought the Sinaloa Cartel. Another Sinaloan trafficker Hector Beltran Leyva has waged war with Guzman, leaving piles of severed heads and bullet ridden bodies in Sinaloa. “People are scared about more violence breaking out, of what reaction the cartels will have,” Valdez said.

But the Guzman arrest boosts President Enrique Peña Nieto, who can claim to have acted where his predecessors failed. Guzman escaped from a Mexican high security prison in 2001 under then President Vicente Fox. Guzman then evaded capture throughout the rest of the Fox presidency and stayed on the run during six years of President Felipe Calderon, even as the government waged a military offensive against traffickers, sending thousands of police and soldiers to Sinaloa state.

Still, the leftist opposition Democratic Revolution Party insisted that unless the government goes after money laundering and builds up the justice system, arrests of kingpins will not stop the violence. “We demand that there is…the dismantling of financial networks and the combating of impunity, the cancer that has fed criminals,” the PRD said in a statement following Chapo’s arrest. Others feel drug policy itself needs to be reformed to stop the war. Legislators in the leftist-dominated Mexico City assembly recently proposed to soften marijuana laws to reduce cartel power.

Guzman’s immediate future is uncertain. While he still has to serve out his sentence in Mexico, several U.S. courts are seeking his extradition on racketeering and trafficking charges. By extraditing him, Mexico could avoid the security problems of holding Guzman in a Mexican jail, Vigil said. Mexico’s prisons have suffered from notorious escapes in recent years, including some with more than 100 inmates and others supported by helicopters. But Guzman’s lawyers will likely fight hard for him to stay in Mexico. “If Guzman is extradited to the United States,” Vigil said, “he will never see daylight again.” 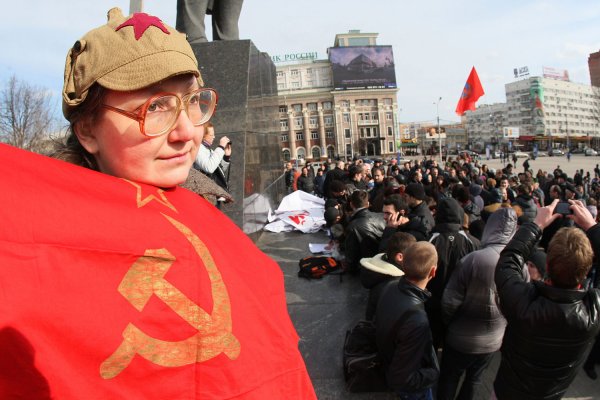 The Russian Stronghold in Ukraine Preparing to Fight the Revolution
Next Up: Editor's Pick