HGTV Abandons Show With Anti-Gay Hosts: What You Need to Know About the Scandal

Most of the time, reality shows about real estate aren’t exactly a hotbed of controversy. But if the intersection of duck calls and TV has shown anything, there’s always a chance that off-screen reality can interfere with a network’s best laid plans.

The latest example of that phenomenon has some bloggers up in arms this week, as HGTV announced plans not to create the planned show Flip It Forward shortly after a connection was made between its stars and anti-gay activism. Because the show hadn’t yet garnered any fans, it wasn’t as closely watched as last year’s Duck Dynasty scandal was; so, if you’ve missed it up until now, here’s everything you need to know about what happened:

In mid-April, HGTV announced their planned fall schedule. Flip It Forward, starring the brothers David and Jason Benham, was on the docket for October. The Benhams were credited in the show’s plot synopsis as house-flippers with a decade of experience, who would help families find low-cost fixer-uppers for renovation.

Earlier this week, on May 6, the People For the American Way blog Right Wing Watch — a project “dedicated to monitoring and exposing the activities of the right-wing movement” — drew a connection between the Flip It Forward stars and right-wing activism. David and Jason’s father (the appropriately named Flip Benham), they wrote, runs an abortion-clinic protest organization and has said that pro-choice policies were to blame for 9/11. And it’s not just their dad who’s politically active: during the 2012 prayer rally shown in the photo above, David Benham told a radio host that he and his brother had organized the rally and that homosexuality is “attacking the nation.” He was also active in pushing for North Carolina to ban same-sex marriage. (There’s much more where that came from: Right Wing Watch also chronicles David Benham’s anti-choice and anti-Muslim statements of the last few years.)

Shortly after, according to Deadline, HGTV said they were planning to look into the Benhams further.

The next day, via Facebook, HGTV announced that they had “decided not to move forward” with Flip It Forward. The network has not provided any explanation for that decision.

On May 8, Faith Driven Consumer — an organization that was deeply involved in protesting A&E’s decision to suspend Phil Robertson from Duck Dynasty — jumped into the fray with the hashtag #FlipThisDecision and a petition demanding HGTV reverse the decision, calling the axing of the show “intolerant and discriminatory” and assuming that it was “because of the pro-life and pro-natural marriage faith-driven beliefs of stars David and Jason Benham.” Out of a goal of 5,000 signatures, the petition already has more than 3,000.

Around the same time, the Benhams issued a statement about HGTV’s decision. Though HGTV has not provided any explanation of their reasons for cancelling plans for the show, the Benham response suggests that they believe their religious beliefs caused the show’s demise. Their Christian faith, they write, is inextricable from their work helping people find homes — but, they say, “anyone who suggests that we hate homosexuals or people of other faiths is either misinformed or lying.” They were “saddened” to lose the show, but say that if their beliefs were responsible for the network’s decision, “then so be it.”

(Other people’s priorities are different, however: many commenters on HGTV’s Facebook page seemed happy with the network’s decision — but not for political reasons. HGTV viewers, it appears, don’t care whether the brothers are anti-gay or anti-choice or anti-Muslim — they’re just uninterested in real estate and house-flipping.)

Ultimately, it seems unlikely that the #FlipThisDecision crowd will have much of an impact. As was the case with Duck Dynasty, it’s worth remembering that this isn’t a First Amendment issue, so any legal recourse the Benhams might have would be contractual, not constitutional; HGTV having already announced their decision suggests there’s not contract wrangling to be done.

There’s one other Duck Dynasty similarity left to point out: as my colleague James Poniewozik wrote when that scandal was still fresh, what ends up happening in a case like this is that the network and show (or non-show, as the case may be) become a shibboleth for viewers’ political beliefs. If you were only looking forward to the show because you like real-estate stuff, that reasoning is now overwhelmed by the political side of it.

But there’s good news for those HGTV fans: the network’s fall schedule still boasts fodder for people who like property-renovating siblings. November should see the premiere of The Big Brothers Reno Project, a brothers-renovate-a-house series starring Drew and Jonathan Scott — brothers who are unlikely to cause a scandal of this sort. 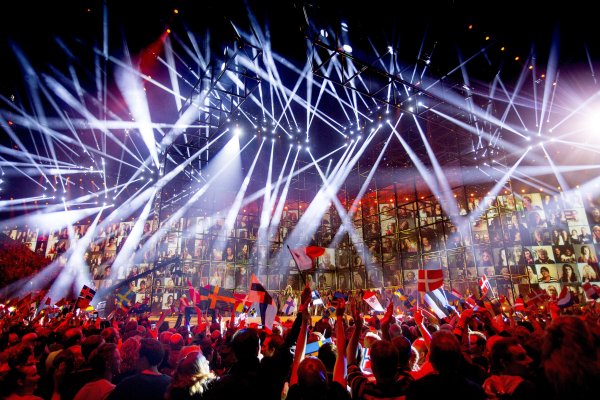 Now That's What I Call Eurovision!
Next Up: Editor's Pick