Antibiotics Overload Is Endangering Our Children

People around the world have been overusing antibiotics for years. Predictably, this has made bacterial infections more resistant to the very antibiotics we use to treat them. But in addition, due to the cumulative nature of antibiotic overuse, our children may be growing up without the full complement of their necessary microbes. Recently we have learned that these antibiotic exposures may be harming our metabolism and immunity; experiments in my laboratory at New York University’s Langone Medical Center are providing evidence that such changes are fueling our current epidemics of obesity, asthma and allergies.

In the future, we may have to restore our children’s lost bacteria. But where will they come from? They might come from far away places, or from our own families. I can imagine grandmothers who have not taken so many antibiotics in their lifetime preserving, and then giving, their bacteria to their grandchildren. Alternatively, we may be able to turn our own gut bacteria into medicine. The people who have had the fewest exposures to antibiotics, antiseptics and the accoutrements of modern life are logical sources.

For the last decade, my wife, Dr. Maria Gloria Dominguez Bello, and her colleagues in Venezuela, Peru, Bolivia and Brazil have sampled some of the skin, mouth and gut bacteria from the Amerindian peoples living in the Amazon and Orinoco jungles, and in the Andean highlands. What a treasure these specimens are. Gloria now has saved resident microbes from a wide range of people, some who have had some contact with modern life, like roads and cars, and some who were essentially from the Stone Age, with no written language, no mathematics, no contact with the modern world—and with none of our modern plagues. Some had never taken antibiotics. In a sense, their microbes are living fossils. The fecal samples are absolutely unique—and priceless.

Now, DNA from many of the specimens has been extracted and sequenced. The differences between these samples and those taken from North Americans are stark and almost paradoxical. The North Americans have only a few taxa that are unique to them, while the Amerindians have hundreds of unique species that were not present in most of the U.S. subjects. I believe that many of the microbes they carry have disappeared from us due to our exposures to antibiotics and other conventions of modern life.

This is important evidence supporting a hypothesis I have been working on for nearly 20-years concerning “disappearing microbes.” It does not take complex statistical analyses to see the major differences between the samples from the two populations. Some day these ancient microbes, missing from us, might be used to protect our children from the modern diseases now plaguing them. One day we might give them back to our young babies to fill the modern void, and even help the descendants of the villagers, as they too inevitably modernize.

I imagine that babies in the future might undergo a new kind of check-up. For the one-month visit, the doctor will examine the baby, along with his or her poop and urine. In the lab, the bacteria will be sequenced and counted and the urine analyzed for particular metabolites. Out will come a statement: baby doing fine, but need to supplement with Helicobacter. And for another baby, it might be Allobaculum, and for the third, Oxalobacter. So for each child, the doctor will order up from the formulary a culture of the microbe needed.

Maybe these microbes will be applied to the mom’s nipple, so that the baby can take them in with mom’s milk. Or maybe they will get a special formula, let’s say with some cells of Oxalobacter and oxalate, the nutrient that this microbe loves but that we can’t digest. Such a “synbiotic” approach will help get the strain started; the probiotic with its prebiotic. These are not just random organisms. My lab is studying each of these and their relationship with humans.

In 1998, I predicted in the British Medical Journal that we would one day be giving Helicobacter pylori, a disappearing organism, back to our children. Since then, the support for this idea has only grown stronger, and the list of disappeared organisms longer. But these are early days in the discovery process; most of the disappeared ones and especially how they interact with us remains secret.

The logic is inescapable: Our ancient microbes are there for a reason; they evolved along with us. Everything that changes them has potential cost to us. We have changed them—plenty. The costs are already here, but we are only just beginning to recognize them. They will escalate.

We stand at the proverbial crossroads. We have medicines and practices that have served us well, but have had hidden side effects. With powerful agents of any kind, there always are unintended consequences, so it should come as no surprise that antibiotics, wonder drugs in so many ways, have side effects. What is so troubling in this case is that we’re not talking about a rarely used agent that must be handled with care. Routine over-prescription of antibiotics, especially to young children, is at the core of modern health care.

The time for substantive changes is now. But change takes time, and reversal of the losses takes even longer. As with global warming, there is the risk that the status quo will be “locked in.” Yet, I am optimistic. The changes in human micro-ecology have been going on for only a little more than a century, mostly the last 60 to 70 years, with the wide use of antibiotics and procedures such as C-sections. This is the blink of an eye in the totality of the human experience. Change that comes fast can depart just as rapidly, but concerted effort is needed.

Martin J. Blaser, MD, is the author of Missing Microbes: How the Overuse of Antibiotics Is Fueling Our Modern Plagues. He has studied the role of bacteria in human disease for more than thirty years. Blaser is the director of the Human Microbiome Program at New York University, and was formerly the president of the Infectious Diseases Society of America, and has had major advisory roles at the National Institutes of Health. He lives in New York City. 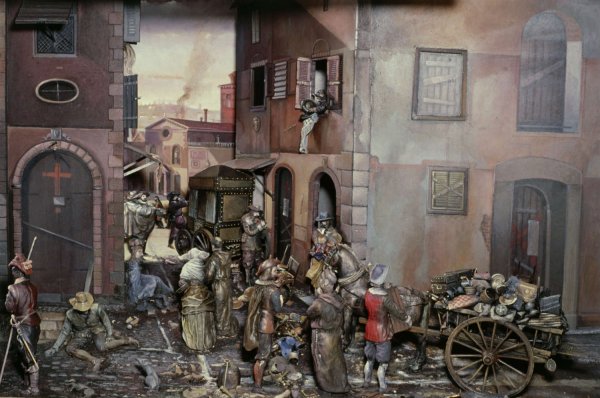 The Medieval Black Death Worked in Survivors' Favor
Next Up: Editor's Pick