Ukraine’s parliament moved quickly to choose a new interim president and establish a working government on Sunday, just a day after the deposed President Viktor Yanukovych fled Kiev in the face of mass violence and unrest.

Yanukovych was handily dismissed in a parliamentary vote Saturday after presiding over the worst week of violence in Ukraine’s post-Soviet history, and parliament handed the president’s authority temporarily to Oleksander Turchinov, who was elected speaker on Saturday, Reuters reports. Meanwhile, a field of candidates for leaders of the new government began to emerge, led by Yulia Tymoshenko, the arch-rival of Yanukovych freed from prison on Saturday, and her party allies.

Pro-European Union protestors stayed camped out on the smoldering Maidan Square in central Kiev, maintaining a steady pressure on parliament to exert its authority and hold Yanukovych accountable for the violence of the last week that left 82 people dead. Presidential elections are set for May 25.

The newly-deposed Yanukovych claimed he is still president and denounced the revolution as a “coup d’état.” Protestors wandered around his abandoned opulent estate outside Kiev on Saturday, reigniting accusations among the opposition of corruption and graft among the country’s top leaders. Yanukovych saw three months of protests against his rule after rejecting a far-reaching E.U. trade agreement in favor of closer ties with Russia. Dozens died earlier this week in the worst civil violence in the country’s recent history. 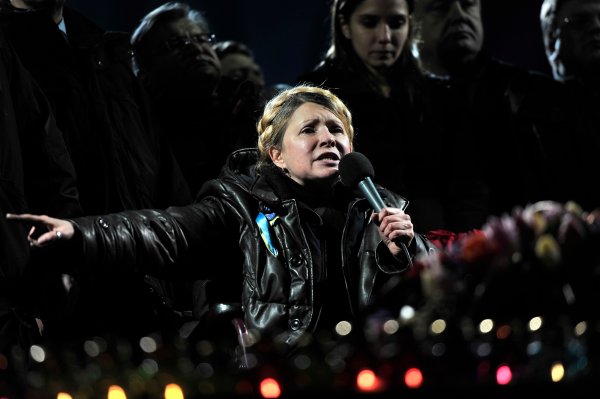