Matteo Renzi: 'Italy Will Never Be a Normal Country'

Prime Minister Matteo Renzi at the Palazzo Chigi in Rome on April 28, 2014.
Alex Majoli—Magnum for TIME
By Stephan Faris

But then, we’re not a normal country because we have a complicated bureaucracy, a political system that’s appalling. We have twice as many parliamentarians as the United States. We pay some presidents of [administrative] regions more than the United States pays its president. We would like to make Italy a normal country from the point of view of the political system.

Where did Italy go wrong?

It went wrong in the public administration. It’s too complicated. And in its politics. It has too many politicians. Why? Because in these years Italy has been unable to change itself. The UK changed its skin with Tony Blair. Germany changed skin first with [Gerhard] Schröder and then with [Angela] Merkel. The U.S. has changed its skin various times. But Italy remained attached to conservatism. It had a political class that lived in the past and didn’t build the future. The past is our strength, but it risks becoming our ruin if we walk with our heads turned backwards.

When you met Angela Merkel, you made a toast where you compared Italy to Michelangelo’s David. What did you mean by that?

When Michelangelo finished his David, Florentines asked him, ‘How did you do it?’ And Michelangelo said, it was really easy. All I had to do was cut away all the marble that was in excess. That’s how I see Italy. If we cut away all the things that are in excess, bureaucratically, fiscally, something will come out that’s more beautiful than the David… More beautiful than the David, let’s not exaggerate. As beautiful as the David.

A string of Prime Ministers have tried to reform Italy before you, and failed. What makes you think you’re going to succeed where others have not been able to make progress?

Do you know the game [Pick-up Sticks], where you have to pull out one stick at a time [without disturbing the others]? Many of my predecessors thought that it was enough to play [that game when trying to] change the administration in Italy, pull out one stick at a time. I’m convinced that we need to risk everything and try to do a real revolution. Unlike those who think it’s enough to pull out one piece at a time, we’ll put in all our courage, all our energy, all our grit, and we’ll try to overturn the system altogether.

I think at this moment, we have the conditions to do it. This is the right moment. If we don’t do it now, Italy misses the train. Italy is a strange problem. [But] in its moments of maximum difficulty it has always found the strength to do the most incredible things. Italy is this. I bet you that in the next 10 years, Italy will return to be the leader of Europe, the locomotive of Europe. The Italy of my children will be at head of Europe, economically. Because Italy has all the conditions to be the country of the startups, the country of artisans and quality, and the country of the big companies.

You’ve been compared to Tony Blair, because of the way he took on the old guard of his country and changed the definition of what it means to be left-wing in the United Kingdom. What does being left-wing mean to you?

Blair changed the Labour Party, which was one of the most antiquated institutions in the global political world. With Blair it became a place of innovation. It’s the same thing we need to do in Italy. For me, left-wing is the “future.” So, it’s innovation. So, it’s curiosity. So, it’s investment in new technologies. So, it’s giving opportunities for wealth to everybody, but not constraining everybody at the same level. The left is equality, but not in the way that part of the Italian unions thinks, in the sense that everybody needs to arrive at the same point. No. Everybody needs to start from the same point. And then if you’re better, go. For me, the left is courage, risk.

You’ve been criticized for working with former Prime Minister Silvio Berlusconi on electoral reforms, especially given that he’s been convicted of tax fraud and stands accused of paying senators to switch parties. Why did you choose to do that?

Berlusconi is the head of the main opposition party. In many other institutional systems, it would be illogical or unnatural that the head of a party could have the problems with the justice system that you referred to. But in Italy, the state of affairs is that Berlusconi still represents a significant slice of the population.

Up until February, when you became Prime Minister, you had said that you wanted to take office only after winning an election. And then, you used a parliamentary maneuver to take over from Enrico Letta, the former Prime Minister. Why did you feel that was necessary?

I made this choice because the country was stalled. Blocked. The government wasn’t moving forward. Our constitution provides the possibility to create a parliamentary government. And Enrico Letta wasn’t elected by the people. It’s not like there was a Letta government that won the elections and was replaced. Letta [came to power through] a parliamentary maneuver, exactly the same. He didn’t even have the responsibility of being the leader of his party. At least, I was voted head of the biggest Italian party [the Democratic party]. Which isn’t enough, but it’s something.

It came with a heavy political price.

You don’t think it robbed you of some of the public enthusiasm that you might have benefited from had you come to power by winning an election?

Yes, there was a moment of lack of enthusiasm. It wasn’t so much Italians, who received me with curiosity, as if they were saying, “Let’s see if this one fails too.” It was my friends would have preferred a different approach… I also preferred another approach. But there are moments when you need to do something. And when things need to be done, they should be done.

You’ve said that if you don’t abolish the Senate, the upper house of the Italian Parliament, that you’ll leave politics. What deadlines have you set for yourself?

Within several weeks, we’ll see if the [proposal] is going forward or not. But I’m ready to put in writing that it’ll go forward, that we’re really going to change [the system]. Because the people are with us. It’s not thinkable that things will go up in smoke. But anyway, in respect to your question, my deadline for the first vote is five or six weeks.

You’ve said that the EU stability and growth pact, a set of budgetary rules for European countries, should be renegotiated. While you’ve pledged to respect the EU’s budget deficit limit of 3 percent of GDP, you’ve said that limit is outdated.

The problem isn’t the rule itself. It’s that this rule was thought up 20 years ago, when there was another world, when inflation was at a different level. So technically, it’s obvious that this rule is no longer current, that it’s anachronistic. But I don’t want to use the excuse that it’s anachronistic not to respect it. I’ll respect the rule. Afterwards I can ask to change it. If unemployment doubles, it means the rules is not working.

You’ve said you’d like to have a United States of Europe, a stronger Europe.

Today Europe has rules that almost nobody respects. Italy, yes. Italy respects all the European rules. And yet, it’s a Europe that’s very tied to the criteria of austerity, of rigidity. It’s too much in the hands of technicians and functionaries, of bureaucrats. I believe that Europe needs to be given back to the people, to families. [That] means having a vision of the European Union, in which you go towards a United States of Europe. A European civil service. Labor policies that [are] the same in all the countries. Possibilities of excluding investments in schools, in research, in innovation, from the stability pact.

Italy will assume the Presidency of the European Union for six months from July. What are your goals for the term?

[It] is a great occasion to change the approach of Italy towards Europe. Five years ago, 54% of Italians approved of Europe. Today, it’s 28%. Why? Because many blame Europe as the cause of our problems. It’s not like that. If we didn’t have Europe, it would be worse for us. We wouldn’t have had monetary and financial stability. But I understand that in a family where somebody is unemployed, they see the rigor of Brussels as the only religious doctrine, and the connection is immediate: they fired my son because of the technocrats in Brussels.

On the domestic front, if you could choose one reform—and only one—and get it implemented exactly as you propose, what would you choose?

How big of an obstacle is the Italian Parliament for you? Your government is based on the same fractious coalition that your predecessor was unable to manage.

I’m absolutely certain that this Parliament, for one thousand reasons, will last until 2018, the natural end of its term. I’m convinced of it.

If you want to be positive, you can see that the parliamentarians are aware of the fundamental importance of the process of reforms that has been initiated. They know this is the turning point. They understand that it’s the right time.

If you want to be mean, you can say that the survival instinct prevails in Parliament. They know that if we had to go to the vote, many of them would have difficulties, even to find space on the [ballot], never mind in parliament. This is the reason why a significant number are right now ready to grit their teeth. That’s the negative view, what someone malicious would say.

I’m good, so I say it’s without a doubt the first reason.

If you had to leave politics, what would you do?

I believe that doing politics is a beautiful experience, extraordinary, fascinating. But here in Italy we need to get used to seeing politics not as a career for life, but as an obligation for a bit of time. I imagine myself as somebody who tries to change the country for a few years, and when I quit, I quit.

I’m less than 40 years old. I don’t come from a rich family. I don’t come from a noble family. I’ve never lived in Rome. [Before becoming Prime Minister] I had never once put a foot in Parliament, and yet Italy gives me the opportunity to try to change it. It means that maybe this country is more open to opportunities and talent than people think.

And what would you do after politics?

For me, after politics, I could be a professor in a university. A manager in a private company. A… a librarian. A dad. Or maybe a grandfather. No, better a dad.

It doesn’t sound like it’s something you’ve thought about.

No. I imagine ending my political experience very young. I hope to have time to recapture a private sphere that at this moment I don’t have anymore. 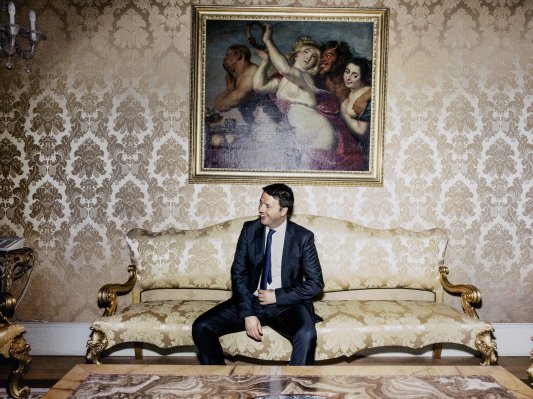 The Italian job
Next Up: Editor's Pick