Dressing for Failure: How the Death of Home Ec Unraveled American Fashion

Kristen Wiig on location for "The Secret Life Of Walter Mitty," May 15, 2013, in New York City.
Bobby Bank—WireImage
By Linda Przybyszewski

An Englishwoman who came to the U.S. after World War II marveled at the “inherent good taste” of American women. At the time, the art of dress was carefully taught, which accounts for the charm of many vintage fashion photographs of American women wearing polished ensembles, harmonized from head to toe. But as we leapt into the post-war era, the insidious forces of chaos and slobbery were unleashed.

Most “Dress Doctors”—my name for the women who taught the art of dress—were headquartered in home economics classes, which came under attack in the 1950s as university presidents did their part to fight the Cold War. They dismantled home economics colleges and redirected funds and buildings to the hard sciences; after all, a physics major had a much better chance of knocking Sputnik from the sky than women taking courses on costume and textiles. Home economics programs disappeared from the University of Chicago and the University of California at Berkeley in 1956, for example, while the Bureau of Home Economics at the USDA was, to quote historian of science Margaret W. Rossiter, “reorganized out of existence.”

The prosperity of the 1950s also undermined the rules of dress by giving rise to the suburbs. When in the city, Americans wore formal clothing in keeping with the seriousness of business transacted among relative strangers. They changed to informal clothing when in the country, where mud and brush required tougher fabrics and fuller cuts. The suburbs fell on the country side of the traditional dress divide. Suburbanites might spend entire days in informal clothing on their backyard patios, while increased leisure time put them into golf togs and other sports clothes. The dress, once the queen of fashion, began to give way to separates for women. Still, 1950s suburbanites knew how to dress for the city or for an evening out. Their children would be different.

The arrival of the Baby Boom generation injected an unprecedented number of young people into American society. The result was a “youth quake” in culture and the rise of fashion designers who catered to the young. Their sometimes mindless logic could be summed up in a remark by Mary Quant, the London designer who invented the miniskirt: “When you break a rule, you automatically arrive at something different and this is fun.”

Once, young women had longed to wear the sophisticated styles reserved for their worldly elders, but, a New York socialite complained in 1968, “Today, if you dress like a decent person, you are made to feel you are a million years old. If you dress young, you look like an idiot. What choice is there?” Fashion had long valued subtle cuts and color schemes, but the “It” A-line dress of 1967 resembled a traffic cone. American-born Main Rousseau Bocher, who had been designing since the 1930s, commented that year that the “grammar” of fashion had been reduced to mere “slang.”

Pants on women further blurred the rules of dress. Before the mid-1960s, women wore them only for sports, lounging and dirty work. Then Yves St. Laurent introduced pants as luxury formalwear. Students took note and challenged school dress codes forbidding pants on girls. American women were buying 45 million pairs of pants a year by 1969.

The final blow to home economics courses for girls came in the 1970s in the wake of the women’s movement, which criticized any attention to women’s appearance as retrograde. Rules for appropriate dress—once as essential a part of a girl’s education as manners—would no longer be passed onto the next generation.

Some efforts have been made to teach appropriate dress since then. The “Dress for Success” books of the 1970s, for example, explained that the then fashionable peasant/hippie looks were not going to help women up the corporate ladder so they had better get a grey suit. But fashion magazines today—following the dictate of 1960s fashion photography, “the weirder, the better”—often present only the spectacular, the slovenly and the seductive. Left out is what we might wear to work in order to look competent, or to an important celebration.

Two Dress Doctors wrote in 1935 that “clothing customs” serve an important purpose. The rules of appropriate dress for time, place and occasion allowed people to get on with their work without distractions and to get on with their play, whether it was rough and tumble sports or grand and celebratory affairs. The problem isn’t that Americans wear Uggs; it’s that we wear them all the time. We’ve lost something that belonged to earlier generations of Americans: the graceful ease of suiting ourselves for all of life’s occasions.

Linda Przybyszewski is an award-winning historian and teacher who earned a Ph.D. in American history at Stanford University. She offers courses on the history of dress at the University of Notre Dame. Trained as a legal historian, she has spoken at the United States Supreme Court. More recently, her research has taken a turn towards her first love: dressmaking. She comes from a long line of amateur dressmakers and her grandmother’s Singer Slant-O-Matic machine from 1958 is one of her prized possessions. 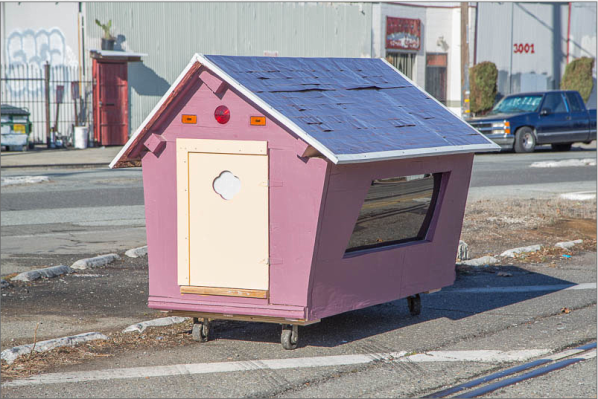 Artist Uses Trash to Make Houses for the Homeless
Next Up: Editor's Pick