Hillary Clinton decried the kidnapping of schoolgirls in Nigeria as “abominable” on Wednesday, adding her high-profile voice to a growing chorus of outrage at a situation that has drawn global headlines.

Speaking at an event in New York, the former Secretary of State and possible 2016 presidential candidate said the kidnapping of more than 250 girls by the Boko Haram militant group is “abominable, criminal, an act of terrorism and really merits the fullest response possible first and foremost from the government of Nigeria.”

Clinton was in town to speak at Philanthropy New York’s annual meeting—sponsored by the Ford Foundation—during which she addressed a range of issues facing women and girls.

When discussion moderator Robin Roberts of ABC asked Clinton about the #BringBackOurGirls campaign to free the schoolgirls, about which Clinton has been tweeting, Clinton said the Nigerian government has been “derelict” in its responsibility for boys and girls for years.

She agreed with President Barack Obama that in order to find and save the girls, other nations need to become involved. “That I believe requires assistance from others including the United States,” Clinton said.

Obama Administration officials announced Tuesday that they were planning to send a team to Nigeria to help aid in the search for the girls, who were kidnapped in April. Obama called the situation “heartbreaking.”

A Boko Haram leader boasted in a video that emerged this week that “I abducted your girls” and “will sell them in the market.” 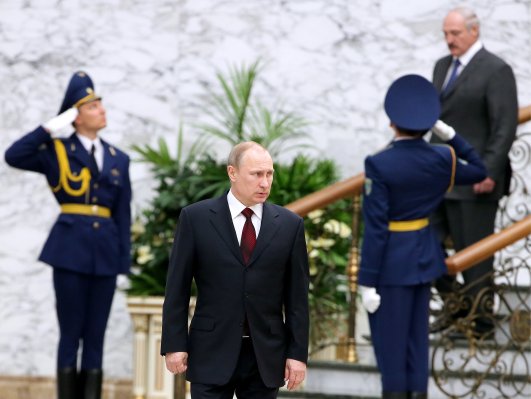 Inside Putin's Eastern European Spy Network
Next Up: Editor's Pick