On Sept. 8, 2012, the Russian Minister of Culture Vladimir Medinsky participated in the opening of a Russian nationalist organization called the Izborsky Club in the monastery town of Pskov, just across the border from Estonia. His speech itself was not particularly memorable, but the Russian official’s presence at the affair was not lost on the Estonian Internal Security Service, which believes the club’s imperialist message and outreach to ethnic Russians across the border are part of an anti-Estonian influence operation run by Moscow.

The head of the club, Aleksandr Prokhanov, seemed to confirm the Estonian suspicions later that month when he declared, “Our club is a laboratory, where the ideology of the Russian state is being developed. It is an institute where the concept of a breakthrough is created; it is a military workshop, where an ideological weapon is being forged that will be sent straight into battle.”

Russian President Vladimir Putin has many such weapons in his irredentist arsenal. The rapid collapse of the pro-Moscow government of Victor Yanukovich in Ukraine brought some of them, like paramilitary force, to the attention of the western public. But Putin’s efforts across the region have been far more systematic and carefully thought out than the recent chaos in Ukraine suggests. Over the last decade, Putin has established a well-organized, well-funded and often subtle overt and covert operation in the vast swath of neighboring countries, from Estonia on the Baltic Sea to Azerbaijan in the Caucuses, say western and regional government officials. “He’s implementing a plan that he’s had all along,” says Clifford Gaddy, a senior fellow at the Brookings Institution and co-author of a biography of Putin.

The operation has been described by local intelligence officials as “soft power with a hard edge” and includes a range of Cold War espionage tools. His Baltic neighbors say, for example, that he has deployed agents provocateurs to stir up their minority ethnic Russian groups which make up 25% of the population in Estonia and as much as 40% of the population in Latvia. They say he has established government-controlled humanitarian front organizations in their capitals, infiltrated their security services and energy industry companies, instigated nationalist riots and launched cyber attacks. The goal, says the Estonian Ambassador to the U.S., Marina Kaljurand, is “to restore in one form or another the power of the Russian Federation on the lands where Russian people live.”

The operation has the secondary, larger goal of undermining and rolling back western power, say U.S. and European officials. And while the greatest threat is to his immediate neighbors, his activities also challenge Europe and the U.S. All NATO countries have committed to each other’s mutual defense, which means the U.S. is treaty-bound to come to Russia’s NATO neighbors, like Estonia, Latvia and Lithuania, if Putin were to attack.

For now, Putin seems unlikely to risk a direct conflict with NATO. But his espionage efforts in relatively weak NATO countries can be as effective as military action. “If you look at the complex sort of strategy that Moscow has employed in Crimea and in Ukraine it becomes much less clear what constitutes an invasion or measures to destabilize,” neighboring countries, says Sharyl Cross, director of the Kozmetsky Center at St. Edward’s University. That uncertainty about what kind of invasion the Baltics might face could make a strong NATO response impossible.

That in turn, says former CIA chief John McLaughlin, could be even more damaging to the U.S. and Western Europe by fatally undermining one of the most successful peacetime alliances in history. “If he were to challenge NATO in some way that paralyzed us over an Article Five issue, that would be a dagger to the heart of the alliance,” McLaughlin says.

The espionage confrontation between Russia and its Western neighbors started with their independence back in the early 1990s, but it escalated in 2007. In one particularly bad incident, the Estonian government removed a statue of a Russian soldier from central Tallinn in April that year, sparking riots by ethnic Russians. In the wake of the riots, Amb. Kaljurand, who was then the Estonian ambassador to Moscow, was attacked in her car by a mob on her way to a press conference. Days later a massive Distributed Denial Of Service cyber attack was launched against the computer systems of the Estonian government and major Estonian industries. In private meetings with the U.S. Ambassador to Estonia, top Estonian officials said Russia was behind the organization and implementation of all the attacks, according to confidential cables sent to Washington by the U.S. embassy and published by Wikileaks.

The war in Georgia in August 2008, sharpened NATO’s focus on Putin’s threat. Russia declared it was protecting ethnic Russians from a hostile Georgian government, an assertion that was taken as a direct warning by other countries in the region with Russian minorities, including the Baltic States and Ukraine. Around the world, intelligence agencies noticed a shift in Russian behavior, according to other Wikileaks cables. In a meeting between a State Department intelligence officer and his counterpart from the Australian government in Canberra in mid-November 2008, for example, the Australian warned the U.S. that Russia was launching a regional program to destabilize its neighbors and advance its interests. In a secret cable back to Washington, the State official said his Australian counterpart “described the Baltic states and Ukraine as ‘countries that are in Russia’s sights,’ with the dangerous similarities in Moscow’s view of the ethnically Russian population and strategic geography of Crimea to those which motivated its recent actions against Georgia.”

In response to the war in Georgia, the U.S. agreed for the first time that NATO should draw up contingency plans to respond to a Russian attack against the Baltic states. The alliance set about expanding plans known as Operation Eagle Guardian, which were developed to defend Poland, to include Estonia, Latvia and Lithuania.

Russia for its part also stepped up its game. Putin encouraged the Russian parliament to pass a law authorizing him to intervene in other countries to protect ethnic Russians. More subtly, in 2008, the Russian Ministry of Foreign Affairs established a national agency dedicated to advancing Russian interests especially in the former Soviet Union, now known as the Commonwealth of Independent States, and to engaging with and organizing what Moscow calls “compatriots living abroad.” Called Rossotrudnichestvo, the agency performs a variety of traditional cultural roles at embassies around the world. It also helps organize local ethnic Russian groups abroad in ways that unsettle host governments.

According to a report by the Estonian security services, membership in one local ethnic Russian group in Estonia, “Coordination Council of Russian Compatriots” is approved by the Russian Embassy and its activities are guided by the embassy. The purpose of the group “is to organize and coordinate the Russian diaspora living in foreign countries to support the objectives and interests of Russian foreign policy under the direction of Russian departments,” according to the most recent report of the Estonian Internal Security Service. “The compatriot policy aims to influence decisions taken in the host countries, by guiding the Russian-speaking population, and by using influence operations inherited from the KGB,” the report says.

Last October, Mother Jones magazine said the FBI had interviewed Americans who had accepted travel stipends from the office of Russotrudnichestvo in Washington as part of an investigation into potential spying by the Russian agency. The head of the Rossotrudnichestvo office denied the charges and called on the U.S. government to distance itself from the allegations. The FBI and other U.S. agencies declined to comment on the report.

Putin has also used his intelligence advantage in neighboring countries to go after NATO itself. After Estonia arrested the former head of its National Security Authority, Herman Simm, in 2009 on charges of spying for Moscow, the Atlantic alliance uncovered and expelled two alleged Russian co-conspirators working at its headquarters in Brussels.

Most recently during the crisis in Ukraine, Putin has stepped up the traditional use of media propaganda, especially on television. The propaganda peaked with outlandish and false accusations of attacks against Russians and Russian speakers in Ukraine. Russia’s neighbors have taken a variety of approaches to countering the propaganda, from outright censorship to counter-programming. On Mar. 21, Lithuania banned broadcasts of Gazprom-owned NTV Mir station after it showed a movie that the government said “spread lies about” Lithuania’s move to declare independence from the Soviet Union in early 1991. On Apr. 3, Latvia’s National Electronic Mass Media Council suspended the broadcast rights of Rossiya RTR for three weeks, claiming the station was peddling “war propaganda.”

Estonia, for its part, considered banning Russian broadcasts but opted to leave Russian channels on and instead to compete with a barrage of “counter-programming” through Russian language TV, radio and print media. “If you ban things it creates more interest,” says Amb. Kaljurand, “The better way is to give better facts and the point of view of the West.”

The U.S. and its allies are hardly innocents in the international spy game. The U.S. government uses overt and covert means to influence and organize pro-Western groups in many of the same countries Putin is targeting. It works through cultural and diplomatic channels to recruit intelligence sources around the world and in eastern Europe, and the Ukraine crisis has only heightened that work. Says CIA spokesman Dean Boyd, “The Agency’s strong partnerships throughout the region enable cooperation on a variety of intelligence issues. When a foreign crisis erupts, it’s normal for the CIA to shift into overdrive to ensure that our officers have access to the best available information to support the policy community.”

It is also true that Russia’s western neighbors include some with anti-Russian and anti-Semitic views that are occasionally reflected in political debate. Lithuania and Latvia in particular are noted in repeated U.S. diplomatic cables from the region to Washington for the presence of “strident” anti-Russian and anti-Semitic voices in politics, some of them belonging to powerful figures.

In late April the U.S. deployed 600 troops to the Baltics and Poland, and U.S. and other NATO countries increased air patrols in the Baltics. The largely symbolic deployment was intended to reassure all four countries that the U.S. takes its Article 5 obligations seriously, Pentagon spokesman John Kirby said at the time. Likewise, Kirby said, “If there is a message to Moscow, it is the same exact message that we take our obligations very, very seriously on the continent of Europe.”

Even the most nervous Russian neighbors believe Putin’s use of force is likely to stop in Ukraine, but his espionage program is likely to continue. “[He] is using the soft power tools and other forms of indirect coercion and influence against the Baltics states,” says the official familiar with NATO and Latvian intelligence, “He will use all of these tactics.”

That is a particular concern for Moscow’s neighbors as Russians everywhere prepare to celebrate on May 9 Russia’s victory over Nazi Germany. “If we have a little bit of rioting that will make people become scared and they’ll say maybe we need to find an accommodation with the Russians,” the official says. 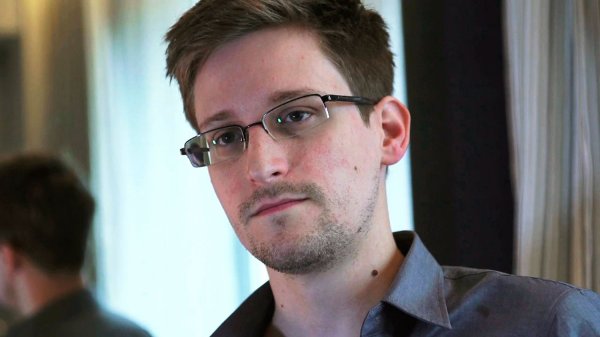 The NSA Leaker May Stay in Russia
Next Up: Editor's Pick