It's Morphing Time: Power Rangers Heads to the Big Screen

The Power Rangers are morphing back to relevance: today, May 7, Lionsgate announced a new partnership with Saban Brands, the original creator of the franchise, to produce a live-action feature film based on the Mighty Morphin Power Rangers. For those unfamiliar with the concept, its teen characters had the ability to morph into heroes who wore brightly colored uniforms and Daft-Punk-esque helmets.

The franchise was launched in 1993 as Mighty Morphin Power Rangers, a television show that, the press release notes, “quickly became the most-watched children’s television program in the United States”; it made use of pre-existing footage from a Japanese action show, dubbed and paired with original scenes to advance the plot. After Mighty Morphin Power Rangers came many other Power Rangers concepts, including a 1995 movie that grossed about $66 million worldwide. In its next incarnation, the filmmakers plan to “re-envision” the characters as “a group of high school kids who are infused with unique and cool super powers but must harness and use those powers as a team if they have any hope of saving the world.”

Though the news may seem to come out of nowhere, it’s not actually much of a surprise. As Deadline notes, Hollywood’s interest in rebooting “proven brands” is high (for example: the Teenage Mutant Ninja Turtles movie). More specifically, as TIME’s Victor Luckerson wrote in an extensive look back at the Power Rangers in honor of their 20th birthday, the Power Rangers have already experienced something of a comeback. Since Saban reacquired the brand in 2010, they’ve already tried to reintroduce the characters to young audiences, with toys and costumes and a new show, along with social-media campaigns to ramp up nostalgia for the characters. If Lionsgate’s hopes for the franchise play out, a new generation of fans will join that ready-made fan base.

In the mean time? Still no word on what happened to the apostrophe/g in “Morphin.” 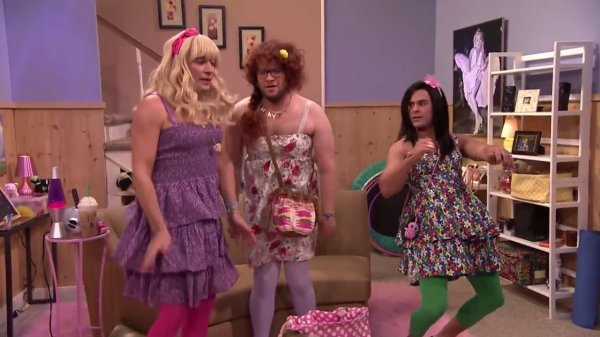 Seth Rogen and Zac Efron Play Teen Girls on The Tonight Show
Next Up: Editor's Pick