Don't Let Your Husband Be a Stay-At-Home Dad

The socioeconomics of parenting are changing. The number of stay-at-home fathers in the past decade has doubled since the 1970s to about 550,000 men, and that figure is expected to grow, especially as more wives take on the breadwinning role in their marriages and the cost of childcare holds intolerable for many families.

I currently earn more than my husband and have, at times, romanticized over him supporting us as the primary caretaker in our growing family. What mother doesn’t enjoy coming home to a home-cooked meal, clean house and bathed child? And more dad involvement is never a bad thing. The stronger the relationship between father and child, the happier the family is, according to a joint study by Brigham Young University and Utah State University.

On the other hand, though, quitting your job to be a stay-at-home parent carries a number of potential risks. And when that parent is dad, the drawbacks can, in at least one case, be graver.

Just as one might hesitate to advocate for women to leave the workforce to become a stay-at-home mom, a similar case can go for men. What happens if dad wants back into the workforce later on? What happens if mom loses her job, faces a salary cut or is unable to work for a period of time due to an injury or other unexpected circumstance?

There’s no denying that childcare is one of the tallest expenses families face. The average annual cost of center-based care for a small child in the U.S. runs as high as $16,000 in states like Massachusetts, according to Child Care Aware of America’s 2013 report. For two children the annual expense can average as much as $28,600. These numbers can be much higher in metropolitan areas, rivaling the cost of sending a kid to college.

The mere economics of it all – especially if you have more than one child – can be enough to support the rationale that one parent should stop working to support life at home. And if you philosophically don’t believe in outsourced childcare to begin with, the decision to become a single-income family proves even more compelling.

With a baby soon on the way, my husband and I have crunched the numbers and learned that a quality day care facility in our Brooklyn neighborhood would run us about $500 to $600 a week. Meanwhile full-time at-home childcare – not including overtime – is more than $35,000 a year. For now, we’ve opted for the latter and have planned some serious spending cuts to make up for the monstrous expense. But add to our household a couple more kids down the road, perhaps a dog, a bigger home to accommodate, and the math would then likely favor designating my husband as Mr. Mom, still assuming our existing income disparity.

Even then, however, we’d rather outsource childcare for fear of the unknown. Is that crazy?

Perhaps not when you consider the facts of the matter. We know that women already pay a price for taking a leave of absence from the workforce. Sheryl Sandberg points out in her book Lean In that “women’s average annual earnings decrease by 20 percent if they are out of the workforce for just one year…30 percent after two to three years, which is the average amount of time professional women off-ramp from the workforce.”

Research suggests the penalty may even be greater for men who temporarily exit the workforce. One study found that dads who left work for even a short period of time to cater to domestic matters earned lower evaluations and more negative performance ratings at work than women who opted out.

Single-income families are also at a higher risk of financial collapse, as one might guess. Researchers at Hope College and Cornell University found that, “Not only are two wages often necessary to adequately provide for the needs of most families, dual-earner couples are less economically vulnerable than single-earner families, for whom a layoff can mean financial collapse.”

A single-income household can also result in more stress for her. As it stands, wives who earn more admit to feeling more pressure to “make it all work,” especially when it comes to the family’s finances. An academic survey I co-authored with Brad Klontz, a clinical psychologist, found that when she makes more she is significantly more likely to be the primary decision-maker on money matters and take charge of things like paying bills, budgeting, saving and planning for retirement. And a greater number of women who earn a bigger paycheck wish their partner or spouse would carry more of the financial burden in the relationship. And if he’s not making any money, where does this leave her?

There is a possible happy medium to this, as many stay-at-home moms have discovered: earn income from home as a part-time freelancer or entrepreneur while you commit to raising your family or, if possible, ask your employer about telecommuting a few days a week.

But even those options are easier said than done. Not everyone can find a way to make decent money from home given their area of expertise; juggling work and little ones in the same space can be harder than one expects; and telecommuting isn’t possibly for many.

When you consider the potential risks of not generating any money as a partner, however, earning an income is simply necessary. Not to mention, keeping your toe in the workforce is a way to still explore and satisfy other needs that go beyond that of Super Mom or Dad. 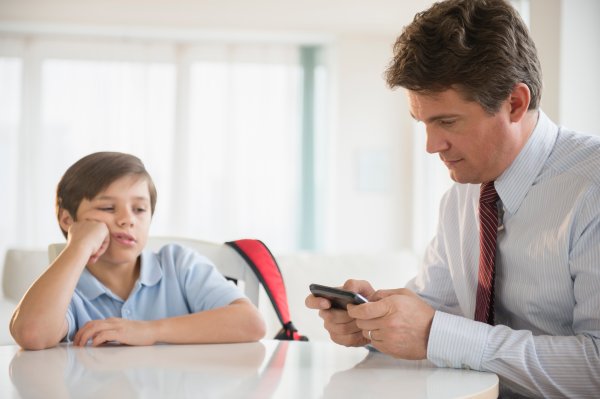 Stop Worrying About Your Kids' Screen Time
Next Up: Editor's Pick