Gravitas and 'Gravity': Why the Science-Fiction Epic Won't Win Best Picture at the Oscars

On Jan. 18, the Producers Guild of America (PGA) announced a tie in its members’ vote for Best Picture — a first in the 25-year history of the award — between Gravity and 12 Years a Slave. A single vote, among thousands, could have changed the flat-footed dead heat between the soaring space adventure and the searing depiction of antebellum injustice. As Brad Pitt, one of the producers of 12 Years a Slave, joked when he spoke onstage that night: “I got my vote in at the last minute. I voted for Gravity.”

A month later, Hollywood insiders are wondering: Could the same thing happen when the Best Picture award is announced at the 85th Oscar ceremony on March 2? Officials of the Academy of Motion Picture Arts and Sciences, which uses the same byzantine vote-tabulation system as the PGA, said absolutely not. But the two movies are seen as the leading contenders in a very close race, with the Abscam comedy American Hustle, another strong finalist, in third place.

The PGA Best Picture award is a fairly smart predictor of Oscar glory: 17 of the 24 previous winners, or 71%, went on to receive the Academy’s Best Picture award. Even more reliable is the annual prize given by the Directors Guild of America. In its 65 years, 58 of the DGA laureates have copped the Oscar for Best Director, and 52 of the movies they helmed (80%) were named Best Picture. Who got the DGA statuette this year? Alfonso Cuarón, for Gravity.

Cuarón also won Best Director at last weekend’s British Academy Film Awards, the industry’s final big prize show before the Oscars. Just to increase the tension, the British Academy of Film and Television Arts named Gravity the Best British Film (the movie was shot there), then gave its Best Film citation to 12 Years a Slave (whose director, Steve McQueen, and many of its leading players are British, but never mind that).

Let’s say the Best Picture Oscar is a two-movie race. Then let’s note that Gravity is a huge box-office hit — about $270 million in domestic theaters and over $700 million worldwide — whose leading lady, Sandra Bullock, is one of Hollywood’s most beloved and admired stars. By comparison, 12 Years a Slave has earned a bit under $50 million in North America and $110 million globally. Its leading man, the Afro-British actor Chiwetel Ejiofor, is just getting to the point where American casting directors can correctly pronounce his name (Chew-ih-tell Edge-eo-for, for the record).

So do all these signs indicate that Gravity has the edge for the top prize on Oscar night? They do not. Gravity won’t win Best Picture.

I hope I’m wrong, since I chose it as the year’s best movie in the TIME Top 10 rollout in December. (I rated American Hustle third and 12 Years a Slave ninth; in my view, this Oscar year offers a rare competition of distinguished films.) “Gravity,” I wrote, “reveals the glory of cinema’s future; it thrills on so many levels.” I’ll stick to that appraisal. But too many factors in the long history of the Academy’s selections conspire against my favorite movie. One way or another, Oscar is anti-Gravity.

Starting with the genre, you could say that Gravity tells the story of a strong woman battling dreadful obstacles and her own emotional isolation to achieve a stunning rebirth. But Hollywood sees it as a very cool, technically ingenious science-fiction picture. In the previous 84 Oscar ceremonies, no sci-fi movie has ever taken the top award — not 2001: A Space Odyssey (which wasn’t even nominated in 1969, when Oliver! won), not E.T.: The Extra-Terrestrial (which lost to Gandhi in 1983) and not Avatar (which lost to The Hurt Locker in 2010). Gandhi? Oliver!? Really?

Gravity‘s closest kin might be Life of Pi, a finalist for last year’s Best Picture. Both movies are fantasy-dramas, laden with amazing visual effects, about someone stranded in the harshest of elements (space and sea, respectively). Both showcase the craft of directing at its highest level of artistic and technological dazzle. Ang Lee won the DGA award and the Oscar for Best Director (as Cuarón is expected to). But Life of Pi lost Best Picture to Ben Affleck’s Argo, a real-life heist movie with an inspirational take on America’s, and Hollywood’s, power to do good around the world.

The wins for Argo, and Oliver! and Gandhi and so many other of Oscar’s Best Pictures, prove the Academy’s devotion to the cinematic status quo. Previous votes from the 6,000 members indicate that they want movies not to expand the mind and senses but to touch the hearts of middle-aged (or older) Hollywood liberals. They prefer films that employ lots of actors and traditional technicians — the gaffers on the set. The digital future of movies is anathema to Academy voters; they prefer the old in new packages.

They especially cherish movies set in the recent or distant past — like eight of the 10 winners in the 1990s, and nine of the Best Pictures since then — and if possible, based on a historical event (The Hurt Locker, The King’s Speech, Argo). And if the movie is about movies, so much the better. Hence the wins in the past two years for those love letters to the wonder of Hollywood, The Artist and Argo.

(MORE: Why Argo Was a Lock for Last Year’s Top Oscar)

Gravity fails on all these counts. It’s a made-up story set in the future. It has a visible cast of two: Bullock and George Clooney. And most of its effects geniuses who helped Cuarón conjure up Gravity labored in pre- or post-production, far from London’s Shepperton and Pinewood studios, where the actors did their thing on wires in front of a green screen. Academy members tend to vote for movies that are sterling examples of the kinds of films they make. Gravity is a movie they couldn’t make, and probably wouldn’t even want to.

With no political agenda, Gravity can’t summon dewy sentiments about social equality for 19th century blacks or — as with Dallas Buyers Club, which is likely to receive two acting Oscars, for Matthew McConaughey and Jared Leto — late 20th century AIDS victims. Gravity is “just” a big, digital action picture; it’s the kind that gets its reward at the box office, not on Oscar night. It’s a Marvel movie with a higher IQ. As the Academy voters see it, Gravity lacks gravitas.

(MORE: How They Made Gravity)

Things the Academy members don’t like: going out to the movies (they usually watch the nominees on screeners in their media rooms) and 3-D (because old people don’t want to put glasses over their bifocals). Gravity, like Avatar, demands to be seen in a big theater and in stereo-vision. Those who see the movie at home are missing the all-important awe factor.

Four years ago, another acclaimed science-fiction movie competed for the top Oscar with a much smaller film — also set in the recent past, about Americans fighting to make the world a safer place. James Cameron’s Avatar, the all-time top grosser in North America and worldwide, lost to Kathryn Bigelow’s The Hurt Locker, the lowest-grossing film (in real dollars) ever to win Best Picture. It happened that the two directors were once married to each other, and that Cameron was not widely loved by the Hollywood establishment. Cuarón is a most lovable fellow; that’s one reason he will win Best Director. But his movie represents everything Oscar members ignore or avoid, and that’s why Gravity won’t win.

(MORE: Why Avatar Lost at the Oscars)

In short, the very aspects that make Gravity the year’s best movie are the ones that are likely to keep the Academy from choosing it as Best Picture.

Does this mean 12 Years a Slave will win? Probably. It’s a tough, inspiring movie, and McQueen, as one of the film’s producers, could well become the first director of African ancestry to receive a Best Picture statuette. Or American Hustle could reclaim the momentum it had in January, when it took the top prize from the Screen Actors Guild.

But for my favorite movie to win, it would need something like an Oscar miracle — say, if a couple thousand members chose visionary cinema over Academy tradition and voted for Gravity. That includes you, Brad Pitt. 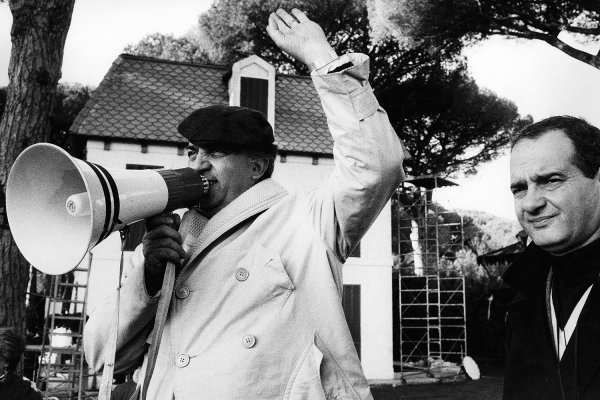 Does Anyone in the U.S. Still Go to Foreign Films? Yes. Indians!
Next Up: Editor's Pick