Ukraine's Battleground Blurs the Lines Between Civilian and Fighter

Parents and relatives mourn a pro-Russian medical worker, in Kramatorsk, Ukraine, on May 5, 2014
Maxim Dondyuk for TIME
By Simon Shuster / Kramatorsk

The conflict in Ukraine hinges on a war over the meaning of words. So far, all sides have been able to agree on two things: the central government in Kiev has lost control over several towns in its eastern regions, and last week, it sent its armed forces to take them back. But there is a lot of confusion on the question of whom they’re fighting. Kiev has called the people in command of these towns “terrorists.” Moscow has called them “peaceful citizens” rebelling against the “junta” government in Kiev. But neither of these parallel realities is anywhere close to the picture on the ground.

Both Moscow and Kiev are partly correct. The Ukrainian military has now encircled both peaceful citizens in the eastern region of Donetsk and fiercely aggressive militant groups. But the question lies in how its troops will tell these groups apart. More than any other factor, this will determine whether Kiev’s campaign results in a massacre of its own people, a restoration of its authority, a Russian “peacekeeping” invasion, or some combination of all three. But the closer one gets to the actual fighting, the harder it becomes to delineate the many shades of grey between the warring definitions of the conflict.

On Monday night, my car was stopped at a barricade made of tires and trash near Konstantinovka, one of the last hamlets to slip from the government’s control, about a week ago. The checkpoint was manned by about a dozen local men in civilian clothes, nearly all unarmed and extremely jumpy from news of the nearby battles between their pro-Russian comrades and the Ukrainian troops. The only armed man at the checkpoint was dressed in a black Adidas tracksuit and sneakers, and without saying a word to me, he pulled me from the car and cracked me on the head with the butt of his pistol. It wasn’t clear then, and it’s not clear in hindsight, whether he counts as a terrorist, a freedom fighter or just an average thug.

About half of his buddies got nervous, even sympathetic, when they saw the blood running down my face, and a few even ran to bring me some tissues. Maybe these were meant to be the peaceful citizens struggling for their rights. For a while, they bickered about what to do with me before calling their commander, a lanky man in camouflage named Vanya, who soon drove up with a long-barrel shotgun and a bandolier of red shells across his chest. “You’re screwed now,” one of his men whispered at me.

But on the ride back to his headquarters in the town of Kramatorsk, inside the occupied city hall, Vanya apologized for the beating. “We’re at war here,” he offered as an explanation. “We’re in a military situation.” And even though he holds Ukrainian citizenship, he said his enemy is the nation of Ukraine. So does that make this a civil war? Or just an insurrection?

The town hall was crawling with well-armed men in camouflage uniforms when we arrived. Some women in the basement had set up a modest buffet of pickled vegetables and cold cuts on a counter, right across the hall from the infirmary, whose walls were upholstered in red velvet. Most of its space was taken up with boxes of gauze, medicine, bandages and random surgical equipment, leaving little room for Tatyana Tsepina, the chief nurse, who spoke with the rasp of a dedicated smoker.

Two weeks ago, she said, she had taken time away from her job driving a taxi in order to do first aid for “our resistance,” a term that she meant to encompass the entire population of the town. “We’re not animals here,” Tsepina cooed while applying antiseptics to my head. From time to time, gunmen from upstairs came down to ask for a dose of Valerian root or something for a toothache. “See, we’re decent people,” Tsepina said after one of them had gone. But was she a terrorist in Kiev’s eyes? Or was she as much a hostage in this place as I was?

So far, the Ukrainian troops have tried hard to tell the difference. Four days into their battle around Kramatorsk, they have done their best to engage the enemy fighters and avoid civilian casualties whenever possible. Under the circumstances, their record has been remarkable. On May 2, the first day of the military assault on the rebel territory, a government sniper managed to infiltrate the separatist stronghold of Slavyansk, just north of Kramatorsk, and assassinate one of its key commanders, who went by the nickname Romashka, sources on both sides of the conflict confirmed. That was the first targeted strike against the top of the rebel hierarchy, and no noncombatants were injured.

But it’s not a flawless record: the following day, a gunfight at a checkpoint that lies between these two towns led to the death of a 21-year-old woman named Yulia Izotova, who had been working as a nurse for the separatists in Kramatorsk. The gunfight began before noon on Saturday, as recounted by one eyewitness and two separatist fighters familiar with the shootout. A column of Ukrainian military vehicles advanced on a rebel checkpoint leading into Kramatorsk. The men guarding it ignited their barricades of tires to create a smokescreen, as they opened fire on advancing soldiers who fired back into the blaze. Izotova was on the other side of it, working as a field nurse for the separatist fighters, and was fatally wounded, says Vika Yanchenko, a friend who witnessed Izotova’s death. “The bullet went right through her,” she said between sobs during her funeral on May 5.

Though the clash that killed Izotova was among the most tragic, the one that lasted all of the previous day was more typical of this muddled little war. Before dawn on May 2, about a dozen Ukrainian army vehicles came to a halt on a bridge outside of Kramatorsk, where the separatists had set up another one of their ramshackle barricades. The “guards,” who always wore civilian clothing and were seldom armed, liked to invite girls over for picnics to pass the time.

Within an hour of the Ukrainian soldiers’ arrival, the men on the graveyard shift that night called a crowd of locals to the scene, and women and elderly people soon surrounded the military vehicles, demanding that the troops go back to where they came from. “If I had a gun, I’d have shot them myself,” says Irina Smolina, 47, who arrived soon after sunrise from her home in Kramatorsk. According to four civilians who were there, the soldiers stood their ground for the next 12 to 14 hours, using a mix of appeasement, deception, coercion and finally force to make the locals go away.

“What did they say? They said, ‘Please leave,’” Smolina recalls. “Their officer came out and told us that they’re just here to protect us, that they won’t shoot us or harm us in any way.” At one point, the soldiers apparently agreed to empty their magazines into the air to prove that they had come in peace. “It was pretty cool,” says Smolina’s 20-year-old son, Artur Smolin, who arrived on the bridge a few hours after his mother. A heavy rain was falling at the time, he recalls, “and all their Kalashnikovs were firing into the air at once, with bullet casings flying everywhere.”

Closer to dusk, the scene grew tense. The commanding officer told the crowd that one of his men had been wounded, apparently by a sniper, and his troops began aggressively pushing the crowd back away from their armored vehicles, resorting to the use of stun grenades to disperse them. At that point, “one of our guys threw a Molotov cocktail at them,” says Smolin. At least two other petrol bombs went flying, and the troops, having apparently reloaded their weapons, responded by firing at the ground, the witnesses said. This seems consistent with the resulting injuries, mostly leg wounds from ricocheting bullets or chunks of asphalt. Smolin, who works at a local machine plant in Kramatorsk, was wounded in his right calf and rushed to a local hospital, where I went to interview him three days later.

The ongoing clashes had the effect of hardening minds on both sides. The Ukrainian military had managed on May 2 to take back control of the local TV tower, which had been under rebel control throughout the second half of April. Two days later, the Ukrainian officer in charge of guarding it, a paratrooper judging by his uniform’s insignia, said their patience with the locals had already run out. “After the way they greeted us, we have no trust for anyone here,” he said near the base of the tower, declining to give his name or rank.

That animosity was mutual. As the death toll among the separatist fighters climbed into the dozens this week, their supporters in the local population began to believe horrific rumors about Kiev’s intentions in eastern Ukraine. “I heard they’re already building gas chambers for us,” Yanchenko told me at the nurse’s funeral. “We just want them gone. We don’t want to live in the same country as those monsters.”

Outside town hall in Kramatorsk, local residents have been holding a constant vigil since the military assault began last week. Many of them say they would gladly stand in front of the Ukrainian tanks if they enter the town to retake control, and the soldiers have already seen from experience that this is not a bluff. So as they push ahead with Kiev’s “antiterrorist operation,” they will have to understand the varied ranks of their opponents.

Many if not most of them would be hard to classify as anything other than misguided civilians, driven by an exaggerated fear of their own government to put themselves in harm’s way. But others are clearly angling for a fight. As he prepared to release me on Monday night from his headquarters in Kramatorsk, Vanya, the bandolier-wearing commander, extended his hand to shake mine. It was still caked in a bit of blood, I warned him. “Don’t worry about it,” he said. “Pretty soon ours will be too.” 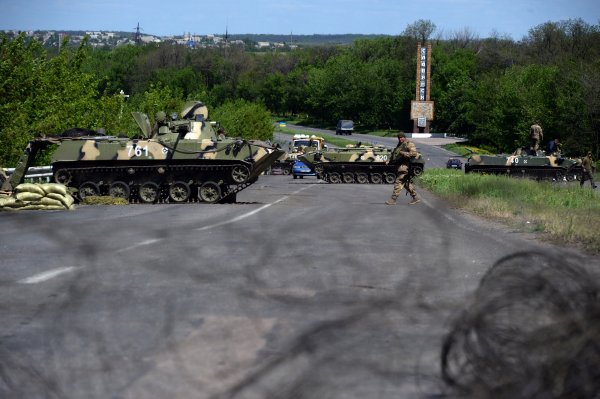