Protesters clash with police after gaining new positions near the Independence square in Kiev, Ukraine on February 20, 2014.
Louisa Gouliamaki—AFP/Getty Images
By Nate Rawlings

The images coming out of Kiev’s Independence Square – which have blanketed digital and social media – paint a portrait of a grim conflict that is cinematic in scope: protesters behind ramparts and barricades, hurling Molotov cocktails at policemen formed into tight phalanxes; a makeshift morgue in a hotel lobby; and tales of a young medical volunteer tweeting her plight after being shot in the neck. A fragile truce disintegrated on Thursday, leaving at least 50 dead, scores wounded and 67 policemen reportedly held hostage by protesters in the Maidan, the main protest camp in Independence Square.

While violence continues in Kiev, the broader conflict taking place in Ukraine is a political one between Ukrainians who want closer ties to Europe and others who favor greater cooperation with Russia. Diplomats and politicians on both sides of what used to be the Iron Curtain are weighing in with their own polarizing vernacular. European leaders have condemned the violence and have approved targeted sanctions against those responsible for “unspeakable, unacceptable acts” in Kiev.

Many in the West see the Ukrainian situation as a case of self-determination being violently curtailed by a bullying outside force. U.S. President Barack Obama accused Russian President Vladimir Putin of failing to respect people’s basic freedoms in Ukraine. “Our approach in the United States is not to see these [crises] as some Cold War chessboard in which we’re in competition with Russia,” Obama said Wednesday, speaking about Ukraine and Syria. “Our goal is to make sure that the people of Ukraine are able to make decisions for themselves about their future.”

The Russians sound different notes. A Putin spokesman laid the blame for Kiev’s chaos squarely at the feet of “extremists” who are using violence in “an attempt to carry out a coup.” Foreign Minister Sergei Lavrov doubled down on that rhetoric. “We cannot characterize what is happening in Ukraine as anything except a violent attempt to seize power,” Lavrov said. “Many western countries, who have tried to interfere in events and played games with insurgents, are also to blame. The west has solidly, repeatedly and shamefully avoided criticism of the actions of extremists, including Nazi elements.”

Russian media – the state-controlled television specifically – have shown images of chaos and violence that seem intended to show the dangers of an unstable Ukraine. Western media has been sympathetic to the protesters, while Russian state media has focused on victims among the security forces. RT, a Russian state-sponsored network, has shown a continuous livestream of Independence Square with two sentences of context: “Violence has engulfed central Kiev, with rioters burning tires and throwing fireworks at the security forces. Ukraine authorities are set to launch a counter-terror operation across the country.”

The opposition forces scoff at and dismiss the Russian rhetoric. Former heavyweight boxing champion Vitali Klitschko, a member of parliament and head of the Ukranian Democratic Alliance for Reform, appeared in Independence Square not long after fierce fighting left 26 people dead. “We will not go anywhere from here,” Klitschko told the crowd. “This is an island of freedom and we will defend it.” But the opposition also includes far right vigilante groups who some say became a commanding presence in the revolution as protests solidified in January. If Ukrainian President Viktor Yanukovych gives up power – which remains a distant scenario at present – a future transitional government would have to deal with the more extreme factions within the opposition.

For now in the Maidan, groups of masked and helmeted “self-defense units” are searching buildings for snipers. TIME correspondent Simon Shuster reports that rifles and pistols have entered the conflict on both sides, leading to dead bodies being loaded into ambulances, bound for the makeshift morgue. Amid continuing violence, many in Kiev fear that Yanukovych could declare a state of emergency and call in troops. As protesters erected new barricades to secure ground won in the past few bloody days, a woman climbed atop a stage to appeal for help from foreign governments. “A state of emergency means the beginning of war,” the woman said, according to the New York Times. “We cannot let that happen.” 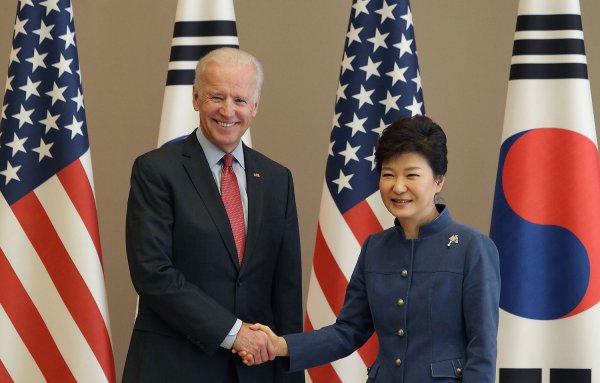 Time to Put Trade Above Politics
Next Up: Editor's Pick