Suspected Boko Haram gunmen reportedly kidnapped 8 more young girls when they attacked a village in northern Nigeria Monday night, amid deepening international outrage over the abduction of girls by the Islamic militia.

Villagers said the men arrived in trucks and started shooting. “Many people tried to run behind the mountain but when they heard gunshots, they came back,” one villager told Reuters. “The Boko Haram men were entering houses, ordering people out of their houses.” A police source told the news agency that a truck had taken the girls away. The abducted girls were aged 12-15.

The attack comes as world outrage mounts over Boko Haram’s abduction of 276 Chibok schoolgirls April 14. The terrorist group, whose name roughly translates to “western education is forbidden,” kidnapped the girls on a night they had gathered at school to take an exam. Boko Haram leader Abubakar Shekau took responsibility for the abduction Monday, when he released a video saying “I abducted your girls” and “I will sell them in the market, by Allah.”

(MORE: How We Failed the Lost Girls Kidnapped by Boko Haram)

The government’s inability to stop Boko Haram and find the girls has led to major unrest in Abuja, where protestors are demanding more government action to stop the terrorist group. The protests are embarrassing for President Goodluck Jonathan, especially as world leaders arrive in Abuja to attend the World Economic Forum this week. 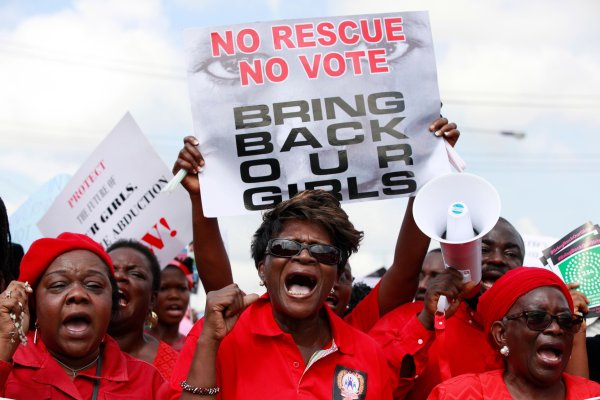 Nigeria Militant: 'I Will Sell Girls'
Next Up: Editor's Pick