Monica Lewinsky is set to recount what it was like to be the “first person whose global humiliation was driven by the Internet,” in a forthcoming tell-all article that will break years of silence for the woman made famous by her affair with then-President Bill Clinton.

Lewinsky, who was a White House intern when her affair with Clinton ultimately led to his impeachment and threatened to derail his presidency, denies rumors that her silence means she’s being paid off by the Clintons, saying “nothing could be further from the truth.” Instead, she says she’s finally ready to stop “tiptoeing around my past—and other people’s futures. I am determined to have a different ending to my story. I’ve decided, finally, to stick my head above the parapet so that I can take back my narrative and give a purpose to my past.”

She insists that her relationship with the President wasn’t abusive, but the public humiliation that followed almost destroyed her. “Sure, my boss took advantage of me, but I will always remain firm on this point: it was a consensual relationship,” Lewinsky writes. “Any ‘abuse’ came in the aftermath, when I was made a scapegoat in order to protect his powerful position. … The Clinton administration, the special prosecutor’s minions, the political operatives on both sides of the aisle, and the media were able to brand me. And that brand stuck, in part because it was imbued with power.”

Lewinsky says she had a hard time finding work after the affair, mostly because her name was tainted with scandal, and she found herself sinking into a deep depression. Her mother feared she would kill herself. “She wouldn’t let me out of her sight,” Lewinsky writes. “She stayed by my bed, night after night, because I, too, was suicidal. The shame, the scorn, and the fear that had been thrown at her daughter left her afraid that I would take my own life—a fear that I would be literally humiliated to death.”

Now she wants to help others who have been publicly humiliated, especially online. She writes that she wants to “get involved with efforts on behalf of victims of online humiliation and harassment and to start speaking on this topic in public forums.” 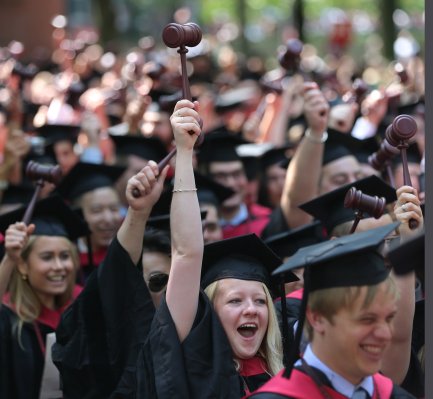 Going to a Top College Won't Make You Happier, Poll Says
Next Up: Editor's Pick