“Bone conduction technology.” It sounds like a gimmick, something you might file on the shelf next to 3D positional audio, high-res music, gold-plated cables and surround-sound cans. It’s not.

In fact, you’ll find it today in breakthrough medical technology like cochlear implants: tiny, surgically implanted electronic devices that can transmit enough sonic information to the listener that even someone mostly deaf can hear sounds and understand speech. If you’re a talk radio devotee, you’re probably aware that Rush Limbaugh uses the latter.

I mention all that because I’ve been test-driving a pair of $100 open ear wireless headphones from Aftershokz for the past few weeks, the Bluez 2, and that’s their claim to fame: “bone conduction technology,” transmitting vibrations produced by a pair of small speaker-pads (sporting what look like rubber shock absorbers abutting your cheekbones) directly to your cochlea. The cochlea, in case you don’t know or remember, would be that spiraling, snail shell portion of your innermost ear you maybe had fun drawing in elementary school biology, that place in your brainpan where fluid jukes and jives reacting to said vibrations, which then get converted into electrical signals that make their way to your brain via neurotransmitters. Imagine a relatively low cost, external headset that can tap directly into that.

The Bluez 2 reminds me a little of an old Sony AM/FM radio headset I used back in the late 1990s — a clunky-looking thing that perched above each of my ears and looped around the back of my head like a wobbly boomerang. Sony’s headset had speakers that rested directly over your earholes and drew its architectural stability from that connective band — all one piece, with no wires or pendulous protuberances. And it took a licking, which is all that mattered to me in that hazy, pre-MP3 era, before the shift from low-fi, functionally minimalist portable audio gear to dragging around microcomputers into which most people I see out running or at the gym still plug headphones today, whether dangling or coiled inside an arm band.

Wireless headsets are a dime ten-dozen nowadays, and bone conduction technology’s not new, but when Aftershokz’s Bluez 2 headset arrived unbidden, looking just enough like that old Sony headset to draw my eye, I decided to give it a shot. I’ve worn it most of each day for the past two weeks and used it as the primary interface to my iPhone 5: listening to audiobooks and music while running outside, and chatting on the phone both indoors and out as well as in the car.

For a Bluetooth device that gets about six hours to a charge and has to generate haptic feedback, my initial reaction putting it on was “Man, is this thing light.” Weighing just 41 grams, it rests almost unnoticeably on your ears, its narrow, glossy black band wrapping behind your head without touching it (Aftershokz includes a reflective sticker you can optionally place on the neck band). If I cared about aesthetics as much as functionality, I’d probably use it in a sentence with words like streamlined and elegant. It doesn’t look half-bad on your noggin, either, though when I wore it out grocery shopping a few weeks ago, someone stopped me to ask if it was Google Glass. (Insert quip about eyes in the back of your head here.)

Let’s talk about the bone conduction angle, since that’s the buzziest buzzword in the mix. Imagine a pair of haptic gamepads strapped to either side of your head like Princess Leia’s cinnamon buns and the vibration-feedback mechanisms in said gamepads jackhammering away. The Bluez 2’s vibrations feel nothing like that, thank goodness, though there’s a slight buzzing sensation that pulses as audio’s conveyed through the audio pads. On my head, the pads align with my temporomandibular joint (the place your lower jaw connects to your skull — it’s right in front of your ear), and that’s where I suspect most are going to feel it. To be clear, it’s strictly vibration-based and not electrical, but it feels a little weird, a bit like someone holding the end of a sonic toothbrush against your cheeks, and that takes some getting used to.

But the benefits are considerable, especially if you’re listening to speech, whether talking on the phone or devouring an audio book. The headset’s speakers are physically positioned in front of your ears, which looks like it can’t possibly work properly, until you realize the sounds are being transmitted and augmented by the vibrating pads, up your cheekbones and through your ear canals. I have narrow ear canals and weird-shaped ears, meaning most earbuds (even with sizing tips) tend to fall out. The upside of Bluez 2’s headset is that it’s one-size-fits-all, and all-fits-comfortably — no fussing with sizers or trying to adjust the speakers to your earhole. And they’re perfectly comfortable for extended sessions, even if placed over a pair of glasses (so long as the temple pieces aren’t too thick). As a glasses-wearer, that’s more than I can say for any other pair of over-the-ear headphones I’ve used.

The other benefit — and I noticed this most while running outdoors in moderately noisy environments (traffic, mostly) — is that speech came through clearly at all times, even while battling a strong headwind. I wound up listening to several hours of the audiobook version of that old 1988 PBS documentary The Power of Myth while testing the Bluez 2, and both Joe Campbell and Bill Moyers came through clearer and more consistently than they ever had using a pair of wired headphones. The same held true when I summoned TuneIn to catch Internet-streamed cable news or local radio. If listening to speech-related audio is your thing, from audiobooks to talk radio to news, Aftershokz’s headset really excels.

I’m sad to say I had the opposite reaction to the Bluez 2’s music playback quality. Paired with my iPhone 5 and the volume set to maximum, XTC’s Skylarking sounded washed together and hollow, as did Elbow’s The Take Off and Landing of Everything, Elton John’s The Diving Board and Janelle Monáe’s The ArchAndroid. And I had difficulty getting the Bluez 2 to play loud enough in even modestly noisy environments. This, despite a product bullet point that boasts of a patented feature Aftershokz calls “PremiumPitch,” which uses dual transducers to “guarantee the finest bone conduction audio.”

I guess that means the finest still has a ways to go: Switching to a pair of low-end, wired Sony MDR-AS20J headphones with loop hangars, the quality upgrade when listening to that same music was startling.

If you’re just looking for something to use as a handsfree headset for voice calls, on the other hand, the Bluez 2 sports dual microphones that worked ably enough in both low and high noise environments. Switching between the headset and Apple’s default iPhone earbuds, the people I called said the audio improved a bit with the earbuds and noted that the Bluez 2’s audio sounded slightly muffled by comparison, but was otherwise fine. I suspect the latter has something to do with noise-cancellation algorithms, the flip side being that in noisier environments, those algorithms helped capture and convey what I was saying more dependably.

Music aside, I’m pretty happy with the Bluez 2 as-is. I wasn’t expecting a revelatory music listening experience (and to be fair, no one’s offering that over Bluetooth at this point), and it does do what it claims to if you’re just after a robust, lightweight, elegantly designed, handsfree interface for speech-based audio listening or making phone calls. $100 feels about right if the latter’s what you’re after, and that includes an adjustable tension band, a micro-USB charge cable and a smartly designed “breathable” storage pouch with one side mesh to let the headset dry if you’ve soaked it during a workout. 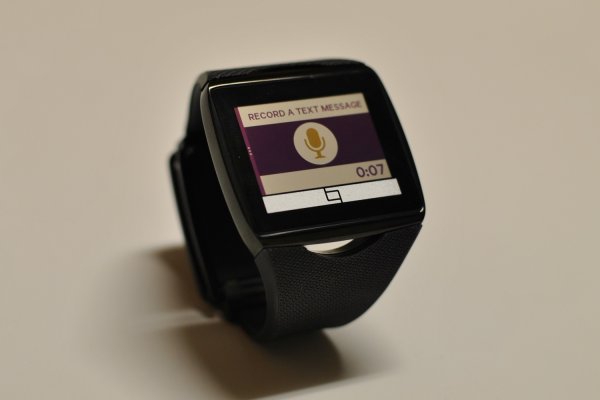 How Qualcomm Is Tackling the Smartwatch Battery Bottleneck
Next Up: Editor's Pick