Tales from the TSA: Confiscating Aluminum Foil and Watching Out for Solar Powered Bombs

Earlier this month, the Transportation Security Administration announced a ban on all carry-on liquids for flights between the U.S. and Russia. The ban came in response to a warning from the Department of Homeland Security that terrorists may have been planning to smuggle explosives aboard planes in toothpaste tubes ahead of the Sochi Olympics. Now, Homeland Security is issuing a new warning: that recent intelligence has detected a new “shoe bomb” threat from overseas (while, at the same time, anonymous officials stress that there is “no specific threat”). Hold on to your loafers.

Absurd rules at the airport have become a fact of life at the post-9/11 security checkpoint — perhaps the central focus of the scorn and ridicule that is routinely leveled at the TSA. But while the public often directs its anger at the agents on the ground, they should really save their ire for the agents’ bosses, both local and back in D.C.

When I came out from anonymity on a blog I’d been writing while employed by the TSA, much of the e-mail that I received from former co-workers expressed anger that I had given floor-level TSA employees a bad rap, while failing to take on TSA employees in higher pay grades. They may have had a point.

Most front-line TSA agents despise the absurd rules they are ordered to enforce just as much as the public whose items are confiscated due to the rules. Ask almost any TSA employee what his or her least favorite part about the job is, and the answer will usually include a long list of managers, federal security directors, and other higher-ups.

My six years at the TSA played out like a circus of absurd security regulations, presided over by a coterie of managers who, for the most part, made the Keystone Cops look competent.

There was the manager who was arrested for fleeing the police after being involved in a marijuana bust (and who was then back at work soon after, with barely a slap on the wrist). There was the manager who ordered all aluminum foil be confiscated from passengers due to the possibility of the boxes’ serrated edges being used as weapons. There were the many managers who tried to have TSA employees terminated for gum-chewing — claiming that there were terrorists casing the airport, looking for gum-chewing screeners with their defenses down.

Of course, the managers themselves were mostly acting upon orders passed down from TSA headquarters. The directives that surface in TSA agents’ morning briefings often draw groans from the officers just as loud as the groans of the public.

In 2010, improvised explosive devices were discovered inside printer cartridges on two cargo planes headed from Yemen to the U.S. Good old-fashioned police work had led investigators to the bombs, and the plot was foiled. But the TSA immediately banned toner and ink cartridges from passing through security. Many passengers on business trips with portable printers in their carry-ons had their ink cartridges confiscated in the ensuing weeks. I, along with many other officers, quietly disregarded the ban, refusing to confiscate the toner cartridge of a woman from Yonkers on account of a foiled plot in Yemen.

But in all my years at the TSA, the most absurd memo passed down from headquarters to front-line TSA employees — a memo that eventually took on legendary status among many screeners — came in 2012.

One morning at briefing, my supervisor at the time — an old, gruff, no-nonsense man with an irreverent sense of humor — told us to gather around, as there was something important to brief.

The memo advised the entire TSA workforce that terrorists were plotting to use solar powered improvised explosive devices in order to harm aviation interests. But not to worry: TSA headquarters was on the case. The memo continued to explain that new technology was being explored in order to detect solar powered IEDs.

The supervisor tore his reading glasses off his face — whether he crushed the memo in his fist, I cannot remember.

“What the hell are these idiots up in D.C. talking about?” he asked. “Why would anyone need a solar powered bomb indoors, on a plane?”

We never heard anything more about the terrorists who were looking to go green, although Wired.com ran an article revealing the same intelligence around the same time.

Ridiculous restrictions and the TSA have become nearly synonymous in the post-9/11 airport, and as new, improbable terrorist plots come to light, we will likely continue to be burdened with new, absurd rules. But our best bet is to take the frustration toward the TSA agent confiscating our over-sized liquids, and re-direct it to the people at TSA headquarters who are being paid the big bucks to make the rules — the ones who make the call as to whether our toothpaste is verboten and whether our shoes will need extra screening. 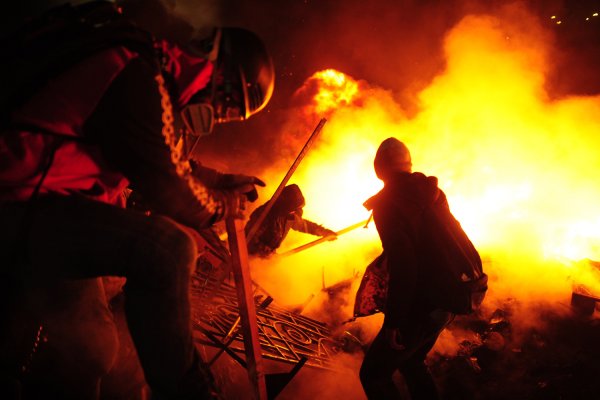 What You Should Know About Ukraine
Next Up: Editor's Pick