10 Ways Friends Gave You Unrealistic Expectations for Your Twenties

NBC via Getty Images
By Charlotte Alter and Eliana Dockterman

High-waisted jeans are back in, and people still drink a lot of coffee — but that’s pretty much all our adult lives have in common with the poker-playing, apartment-swapping lives of the characters on Friends.

It’s been ten years since the series finale aired, and for those of us who spent hour upon hour watching the show, it’s still a bummer that our lives aren’t exactly like those of Rachel, Monica, Ross, Chandler, Phoebe and Joey. Adulthood was supposed to be about coordinated New Years’ dances, football games for troll trophies and songs about malodorous felines. Dating was supposed to be fun! (It’s not.)

Here are 10 lies Friends told you (and us) about life in our twenties:

1. Your friends are always around and never have anything better to do but hang out with you.

On Friends, every room you walk into is automatically full of great company. This is not the case in the real world. In fact, it’s more likely that you’ll run into the one person you hate than the five people you love. We spend more time texting about when we’ll hang out than actually hanging out.

2. You can count on getting a seat on the comfy couch at the coffee shop.

This cruel lie set us up for a lifetime of near-misses with coffee shop couches. The couch at Central Perk is always unoccupied and always has exactly enough room for all the friends to comfortably sit. In the real world, there’s only one reason a couch in a coffee shop stays open for long, and it usually has to do with some kind of bodily fluid or spillage.

3. Working is more of a suggestion than a requirement.

Just to pick on Central Perk once more: you have to wonder what cushy jobs all the friends had that they could take hour-long coffee breaks at a coffee shop far from their places of work in the middle of the day. Which makes #4 even more befuddling.

4. You can pay for a two-bedroom apartment in Greenwich Village on waitressing tips and chef’s wages.

Alright, Rachel and Monica “inherited” the apartment and all its amazing furniture from Monica’s grandmother, but they would still have to make rent on a part-time chef and waitress’ salaries. Seems a little too good to be true. Alas, it is.

5. You can have kids and still hang out with your friends just as much as you did before.

Nothing seems to get in the way of the friends hanging out at Central Perk, not even parenthood. Ben is born in the first season and Emma is born in the eighth season, but neither kid really seems to put a real dent in Ross or Rachel’s social life, which is mighty convenient. Emma tags along to the coffee shop all the time, and Ben basically becomes Ross’s ex-wife’s problem (even though Ross talked all the time about what a great dad he was.)

6. Having a pet monkey is totally allowed in New York City.

Newsflash: it’s not. It’s even hard to have a normal pet like a dog in a city with so few pet-friendly apartments. Don’t get us started on the chick and the duck.

7. You can’t walk down the street in New York without meeting an eligible singleton.

Oh, if only this were the case. The friends met their dates in coffee shops, restaurants, parks and even the middle of the street. What’s more, these eligible bachelors and bachelorettes ended up being ripped firemen, hot Dutch girls or tech billionaires. One of the friends had a date practically every episode, and Tinder hadn’t even been invented yet.

8. The person you’re “meant to be” with has been there all along.

On Friends, the great romances can be traced back hilarious and romantic moments from the gangs’ teens. Ross has a crush on Rachel since high school, and it’s only when the friends rewatched Monica’s old prom video that Rachel realizes how much Ross has always loved her. Monica and Chandler begin to develop feelings for each other during Thanksgiving vacations in college. If only there were real-life flashbacks that could tell you who “the one” is.

9. You can stay friends after you break up.

After some minor speed bumps — Rachel dropping “We were on a break!” every episode, Ross accidentally saying Rachel’s name at his wedding to Emily—Rachel and Ross were really, truly friends after their breakup, and not in a “friends who are trying not to fork each other in the eye” way. Most couples are not so mature.

Nothing can come between the Friends; not money, marriage or parenthood. Even after they drop off their keys in the series finale, you know they’ll always be friends. Sadly, that’s not always the case with our real-life friendships where people grow apart, meet other through work or social events or lose touch after they have their own families.

In other words, Friends is basically an adolescent conception of an ideal adulthood; your entire clique is hanging out all the time, with (almost) no parents and (almost) no responsibilities and plenty of cute boys. Sounds nice — but it’s only fiction.

Write to Charlotte Alter at charlotte.alter@time.com and Eliana Dockterman at eliana.dockterman@time.com. 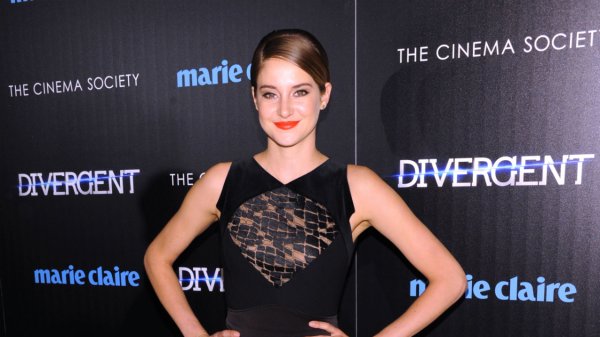 Divergent's Shailene Woodley Dishes On Why She Eats Clay
Next Up: Editor's Pick