Old musicians don’t die. They don’t even fade away. They just become franchises. Like most artists who’ve been around longer than an album or so, Michael Jackson has a considerable vault of unfinished, unproduced or just unreleased tracks; and like most artists who’ve set multiple sales records per album, he’s got a vault that’s prime for plunder.

Xscape, out on Epic Records May 13, is the latest haul from that vault — and yet another in the sequel-crazed franchise that is posthumous Jackson. As with all posthumous records, the idea is inherently iffy, and it’s especially so in Jackson’s case given his beleaguered relationship with Sony and the dubious conditions of his death. A placeholder order page on iTunes had several reviews questioning the entire merit of the enterprise, sound unheard; they’re not fringe opinions but perhaps mainline. Nor does the posthumous Jackson business have the greatest track record, particularly when modern acts get involved; 2010’s disastrous Michael was marred by unfortunate Akon and Lenny Kravitz guest spots and credits-truther controversies; a few years later, on the reissues of Thriller and Bad, in with the demos and rarities were ill-advised remixes like EDM lunkhead Afrojack contorting the title track into a club thumper, complete with Pitbull and his moonwalk-related dad jokes.

None of this has escaped anyone involved with Xscape. “This isn’t record company greed, it’s art,” L.A. Reid said introducing the album at a listening party at Rockefeller Center (the first time in the U.S., though the Brits heard it roughly a week prior). “Some people say these are just outtakes left on the cutting room floor, but ‘Wanna Be Starting Something’ was written for Off the Wall. ‘Billie Jean’ almost didn’t make it [onto Thriller]!” If the powers that be sounded a tad defensive, it was only of Jackson’s legacy, specifically his “Jackson moments”: those first-burst encounters with Jackson’s music that make him worth the pre- and posthumous ado.

If Xscape is anything, it’s curated: eight tracks selected from 1983 to 1999. (The compact tracklisting means a couple promised tracks didn’t make the cut, including one, untitled for now, that reportedly would have included features from D’Angelo, Mary J. Blige and ?uestlove.) They’re unreleased, but they’re not new per se; it’s 2014, after all, and leaks are routine, and the appetite for unreleased Jackson material is much more voracious than anyone wants to admit. Despite the largesse of Epic Records and Jackson’s estate, much of this material had leaked at some point, in some form or other, and while most of it’s been scrubbed from the Internet, vestiges remain: bedroom acoustic covers, unsanctioned remixes, snippets from commercials, transcriptions of Jay-Z and Justin Bieber verses that were at one point attached, respectively, to “Twelve O’Clock” (now the memely, if unnecessarily tabloid-baiting, “Do You Know Where Your Children Are?”) and “Slave to the Rhythm.” (Part of Xscape’s “curation,” it seems, is curating the Google results to keep Biebs out of his legacy, which is downright noble.) But they’re not old, either.

Timbaland, who executive-produced the album with help from Rodney “Darkchild” Jerkins, Jerome Harmon, Stargate and John McClane, gave the old recordings some modern production juice, calling the process — to some press joshing — “contemporization.” But to their immense credit, unlike some recent “contemporizations” (Drake’s mopey exhumation of the Aaliyah vault comes to mind), the material on Xscape seldom sounds gimmicky, or too full of its producers’ personal brands. Even producers like Stargate, who sound so identikit-distinctive you can usually reverse-engineer songs they’ve had a hand in, go subtle. It helps that Jackson’s voice is too singularly frenzied to be overshadowed in a mix; it helps even more that occasionally, as on “Xscape,” the contemporizer and original producer (in this case, Darkchild) were one and the same. Only once on the album do things get glaring: “Blue Gangsta,” which even in its original form seemed like a concept missing its video-PR tour, is so much like beatboxed-and-screwed Timbo that it’s almost funny. Everything else is – stunningly – mostly natural.

Again, it helps that Xscape comes frontloaded with the safest (and earliest-recorded) track, now assisted by Justin Timberlake: “Love Never Felt So Good” is an opulent, warm disco-soul floorfiller in composition and, judging by a couple couples, in practice. It evokes Off the Wall as much as dead-on 2014, because these days disco is so trendy it practically comes pre-contemporized. “Loving You” is even more earnest, and if anything, its lonely-August nostalgia is only enhanced by its extramusical conditions. There’s the odd intriguing production detail — the four-four kick thump and synth line woven through Jackson and Stargate’s escalatingly dramatic “Do You Know Where Your Children Are” sounds as much like the ‘80s as, oh, Kate Boy, and “Slave to the Rhythm,” now de-Bieberized, is burbling protofeminist electro that’d suit any decade — but the bulk of the album rests, as is to be expected, on nostalgia. Funk cut “Chicago” hews too close to “Billie Jean” in sound and subject matter; later on, “The Way You Make Me Feel” makes an appearance – although, to be fair, there are worse tracks to evoke so heavily.

What isn’t present, by design and thankfully, is anything that acknowledges the past Posthumous Jackson flubs, or much controversy at all; as was Jackson’s tack, it’s all confined to the music. Late-career “Xscape” rages against the system, specifically “the man with the pen that writes the lies that hassle this man,” but not too obtrusively to pop. “A Place With No Name” is as much about its paranoid cautionary-fairy-tale story — a woman shows up out on the backstreets to spirit/seduce people to a place where, as Jackson screeches, “you have a friend!” — as its loping America sample. But controversy, once it meets the press, will out. It’s telling that the one track of the eight that’s received the most pre-coverage is the aforementioned “Do You Know Where Your Children Are,” which was quickly singled out as either Jackson’s response or brushoff of his abuse allegations. This is not only bunk – the track was written in 1985, and its title practically carbon-dates it to well before any of that particular controversy came out – but especially disappointing given the rest of Xscape. After all – possibly for the first time in Posthumous Jackson history – there’s enough music to speak for itself. 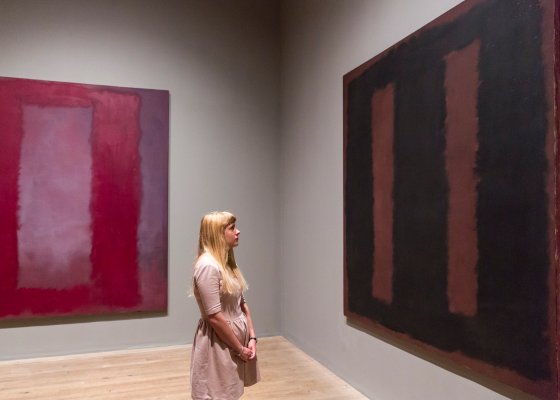 Tate Modern Puts Defaced Rothko Back on Display
Next Up: Editor's Pick