From left: U.S. forward Hilary Knight (21) skates ahead of Finland's Emma Nuutinen (96) during the second period in a women's hockey game at the 2014 Winter Olympics in Sochi, on Feb. 8, 2014.
Brian Cassella—Zuma Press
By Alice Park

Canada may hold the hockey title, but on Thursday the U.S. women’s team will put up a serious fight for the gold medal. It will be the fourth time the rival teams have battled it out on Olympic ice. After earning a bronze in 2006, the U.S. suffered a disappointing loss to Canada in 2010 in Vancouver. After that, they got serious about winning Olympic gold–and that included reinventing not just their training, but also what they ate.

“They were working with a lot of products – recovery drinks, and a lot of bars,” says Alicia Kendig, sport dietician for the U.S. Olympic Committee who was assigned to work with the team on the players’ nutrition needs. “I wanted them to start thinking basic, to buy fresh fruit and vegetables. I wanted them to think of their food intake as a way to recover and fuel their activity – and that it didn’t have to come in a bottle or a wrapper.” Given their short burst of play and their indoor training environment, Kendig focused on giving the athletes foods that kept their energy up and protected them from stiffening up on the bench.

Here’s what she added to the players’ diets to get them to the gold medal game:

Blood tests showed that about 20% to 30% of the players had low levels of serum ferratin, a stored form of iron. Iron is critical for bringing oxygen to cells and muscles; it produces the hemoglobin in red blood cells that binds to oxygen and ferries it to cells throughout the body. Iron also produces myoglobin, which feeds hard-working muscles with the oxygen they need.

Dropping below recommended levels of iron, which for the average woman range from 15 to 18 mg per day, can lead to fatigue, overall weakness and decreased immune function (which can make you more susceptible to colds and infections).

So Kendig, who prefers to get players to eat their nutrients rather than stock up with supplements, keeps the hockey team’s menus filled with high iron foods such as lentils, spinach, meats, and pumpkin seeds.

Like most Americans, the women hockey players had slightly low levels of vitamin D. Because they train indoors, and play a winter sport, about 40% had lower than recommended levels. While the skin can make adequate amounts of vitamin D from sunlight, the hockey players don’t spend much time outdoors in the winter. So Kendig focuses on adding rich sources of D to their diet, from dark leafy greens like spinach and kale to salmon, cheese, and eggs.

A childhood favorite, it’s also a go-to beverage for elite athletes. Milk contains whey protein, which is a form of protein that the body absorbs quickly, and sugar from the chocolate. “For recovery, you need the combination of protein and sugar,” says Kendig, who has it ready for the players when they come off the ice. “As soon as they see it, they want to drink it.”

This amino acid is actually made by the body, but in recent years elite athletes have turned to it as a way to speed up their recovery. Kendig says the American hockey players experimented with the supplement this season, but only about half a dozen continue to take it since many don’t like its taste, and others don’t like the idea of using supplements.

For its fans, beta alanine can keep muscles from getting stiff and sore between bouts of exercise, when lactic acid released by tired muscles starts to build up. Hockey players are especially vulnerable to the effects of lactic acid, since they skate in 45-second to one-minute sessions, then spend several minutes on the bench.

So far, Kendig’s changes seem to be doing the trick; with the U.S. women just one game away from a guaranteed medal, she hopes her message spreads to more elite athletes, not just Olympians. “A lot of athletes train to eat, but they should be eating to train,” she says. “That’s the whole purpose of food.” 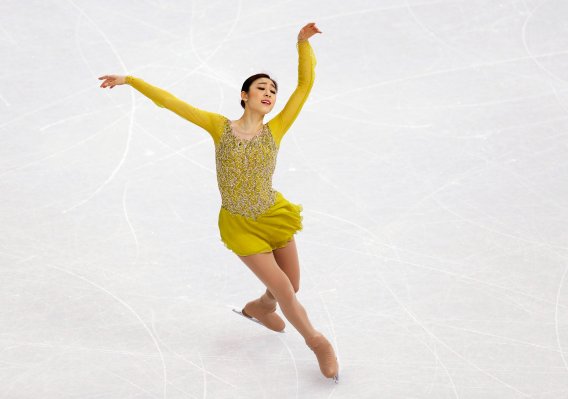 See Highlights from Day 14 of the Sochi Olympics
Next Up: Editor's Pick