Shailene Woodley on Why She's Not a Feminist

One of the hottest topics in Hollywood lately has been the ‘F’ word. Beyoncé, Miley Cyrus, Ellen Page and Lena Dunham have come out as feminists, while Kelly Clarkson and Carrie Underwood have said that they are not. (Katy Perry is on the fence.) And though many define feminism simply as equality between men and women politically, socially and economically, what constitutes the movement is up for debate among stars.

Shailene Woodley has previously been quoted on the importance of movies’ empowering messages for women. So we decided to ask the star of the upcoming The Fault in Our Stars about her views on feminism.

TIME: You’ve talked about before—with Divergent specifically, too—about being conscious of the kind of messages that you’re sending to young female fans when you’re taking on roles. Do you consider yourself a feminist?

Shailene Woodley: No because I love men, and I think the idea of ‘raise women to power, take the men away from the power’ is never going to work out because you need balance. With myself, I’m very in touch with my masculine side. And I’m 50 percent feminine and 50 percent masculine, same as I think a lot of us are. And I think that is important to note. And also I think that if men went down and women rose to power, that wouldn’t work either. We have to have a fine balance.

My biggest thing is really sisterhood more than feminism. I don’t know how we as women expect men to respect us because we don’t even seem to respect each other. There’s so much jealousy, so much comparison and envy. And “This girl did this to me and that girl did that to me.” And it’s just so silly and heartbreaking in a way.

It’s really neat to see: there’s that new Judd Apatow [sic] movie coming out, The Other Woman, and that looks really good because I think it’s really neat that it shows women coming together and supporting each other and creating a sisterhood of support for one another versus hating each other for something that somebody else created.

TIME: So even though what they’re coming together for is to bring down a man…

SW: Yeah, but they create a sisterhood. And he did something wrong, and they’re, you know. They’re going to go after him for it. I think it’s great.

Not everyone agrees The Other Woman (which was not made by Judd Apatow) is so empowering. Some applaud the film for featuring strong female leads, while others argue that its egregious inability to pass the Bechdel test—a simple rule that questions whether two women in a film talk to one another about something other than a man—and its objectification of women is degrading.

Whatever her views on The Other Woman and feminism, Woodley has been lauded so far for selecting powerful female roles: both of her summer flicks, Divergent and The Fault in Our Stars, pass the Bechdel test. 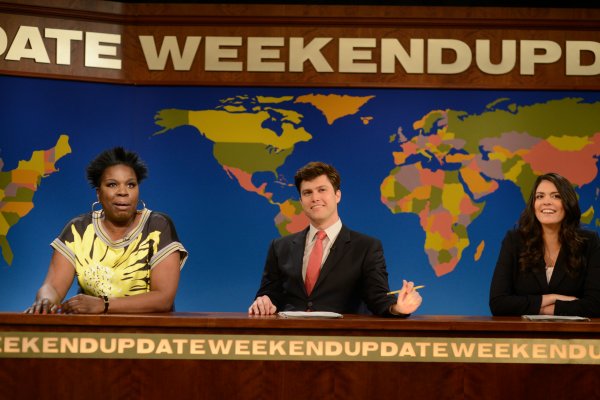