Explicit and nearly-uniform Christian prayers before government functions that mention “Jesus Christ on the cross” and ask spectators to stand for worship are permissible under the U.S. Constitution, the Supreme Court ruled Monday.

The case, called Greece v. Galloway, asked the court to decide whether a local government, the Town of Greece, N.Y., needed to restrict the content of the prayers before monthly town board meetings, or take special measures to ensure that a broad range of faiths were represented in prayer. In another sharply divided 5-to-4 opinion, the court’s conservative justices, with the help of longtime swing-vote Justice Anthony Kennedy, ruled that as long as the prayer preceded the start of official government business there was no need for additional precautions under the First Amendment.

“Ceremonial prayer is but a recognition that, since the Nation was founded and until the present day, many Americans deem that their own existence must be understood by precepts far beyond the authority of government to alter or define,” Kennedy wrote in his decision. “It is not an unconstitutional establishment of religion.”

Indeed, the U.S. Constitution makes no mention of God or Jesus Christ, but throughout American history, the government it established has not refrained from evoking those names before events. The four dissenting justices in this case did not dispute the role of ceremonial prayer. They did, however, disagree about just what sort of prayer should be allowed, and the proper process for selecting the prayers.

In his dissent, Justice Stephen Breyer chastised the Town of Greece for selecting “nearly all of the prayers” to reflect a single denomination and not doing more to reach out to other denominations. “During more than 120 monthly meetings at which prayers were delivered during the record period (from 1999 to 2010), only four prayers were delivered by non-Christians,” Breyer wrote. “And all of these occurred in 2008, shortly after the plaintiffs began complaining about the town’s Christian prayer practices.”

Writing for all four dissenting justices, Elena Kagan expanded upon this complaint. “I think the Town of Greece’s prayer practices violate the norm of religious equality—the breathtakingly generous constitutional idea that our public institutions belong no less to the Buddhist or Hindu than to the Methodist or Episcopalian.”

In response to this complaint, the majority of the court decided that the Town of Greece had done enough to find diversity in a relatively homogenous part of the country. “The town made reasonable efforts to identify all of the congregations located within its borders and represented that it would welcome a prayer by any minister or layman who wished to give one,” wrote Kennedy, who noted that houses of worship had been invited from inside the town’s borders. “That nearly all of the congregations in town turned out to be Christian does not reflect an aversion or bias on the part of town leaders against minority faiths.”

The dissenting justices also complained about the specificity of the Christian prayers delivered in the Town of Greece. “No one can fairly read the prayers from Greece’s Town meetings as anything other than explicitly Christian,” wrote Kagan, noting repeated references to Jesus Christ, the resurrection and the Holy Spirit. “The prayers betray no understanding that the American community is today, as it has long been, a rich mosaic of religious faiths.”

The court did not review demographic statistics for the Town of Greece. But Monroe County, which includes part of Greece and the nearby city of Rochester, show a large Christian majority. Only 3% of the county identified as Jewish, and other non-Christian faiths were represented by smaller percentages. There were no synagogues located within the borders of the Town of Greece. 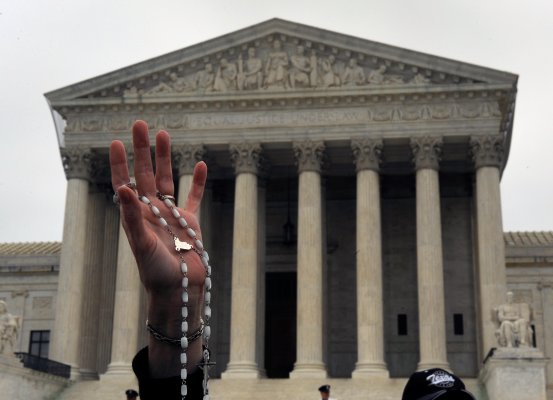 Russell Moore: Supreme Court Made the Right Call
Next Up: Editor's Pick