The Real Problem With Women as the Family Breadwinner

Watching the recent kerfuffle over whether it’s sexist to think that marriages might be threatened when wives make more than husbands is a bit like watching a person trying to change a flat on a bus that’s on fire. Everybody’s avoiding the main issue.

In almost a quarter of marriages in the U.S., wives earn more than husbands. This is a huge, fourfold-sized shift from a half-century ago. And the effects on intimate human relations of this realignment in bacon bringing are still shaking out. The prognostications follow one of two narratives: either husbands’ egos — and thus the American family — will be annihilated; or men will eventually learn to stop holding women back and everyone will be better, more equal and richer than before.

A recent Fox news segment rehearsed the first theory, asking a series of young telegenic types if marriage would be destroyed by alpha females and their earning capacity. “Isn’t there some sort of biological, innate need for men to be the caveman?” asked Fox’s Clayton Morris. “Go out and bring home the dinner …?” The segment was roundly scoffed at by media commenters for being hopelessly outdated and antiwoman. “Men at Fox continued to justify their position that female breadwinners marked a breakdown in society,” wrote Emily Arrowood at Media Matters.

But the data, such as it is, tends to support the view, crudely put by Morris, that men find not being the breadwinner a little unsteadying. Pew research shows that most Americans still believe that having a mother at home and a father at work is the best arrangement for raising a family. And it’s true that men’s self-esteem is very much tied up in their ability to do well at work and to make money. Studies have found that men are more likely to cheat and feel worse about themselves when their wives make more than they do.

The anxiety all this generates is at the center of financial journalist Farnoosh Torabi’s new book When She Makes More. “The cold reality about making a relationship work when there’s an unusual income disparity,” she writes, “is that it takes a lot more effort than relationships with no or a traditional income disparity.” Torabi’s book offers a bunch of tips for high-earning wives-to-be, including being very open about their remunerative status, letting men pay the bill at the restaurant even if the women pay the credit-card bill later and sharing a bank account.

Torabi is pregnant, which is lovely for her, but she is in for one helluva shock. (She’s also been married for almost two full years, so it’s impressive that she’s already written a book about being a wife.) Meanwhile, the “marriage experts” on the Fox show probably had a cumulative age of less than 75. All of them, well-meaning as they were, are ignorant of the real issue, which is that the breadwinner problems are less about how much money any one spouse makes and more about what they do with that other resource, time.

But then, how could it be otherwise? Few people are prepared for the ferocity with which children siphon up every available resource in terms of time, money and brain space. It’s easy to be magnanimous and reasonable when every evening is available and every dollar disposable. Husbands and wives can discuss their finances at a leisurely pace over old-fashioneds in a local boîte. Mothers and fathers, on the other hand, usually find they take up the subject in enraged whispers around bedtime after they’ve discovered that the credit-card bill has gone unpaid yet again.

Women, studies show, are still bearing the brunt of child rearing and housework. This is not always because the dads are lazy; sometimes well-educated and competent women decline to delegate child-rearing responsibilities to other people. But either way, the marital-financial equation is exponentially harder to solve when there are offspring. And there’s less time to solve it and less room for error or experimentation. As divorce lawyers know, many ex-wives feel that if they were making most of the money and doing most of the child rearing and homekeeping, there was very little point in having a husband.

And many ex-husbands, who probably easily managed to get past the fact that their wives earned more, did not believe their lower salary then meant they had to do more on the homefront, especially if they worked just as hard as their better-paid wife. The data suggests two-thirds of all divorces are initiated by women, but the data does not show what the husbands did that might have led the wives to call their lawyers.

If we’re going to have an honest discussion about breadwinning women, it can’t just be a rational discussion about the wisest ways to divide up dollars. It has to be about time as well. And I’m happy to lead it off. Right after I get back from dealing with whatever my kids’ school called me about now. 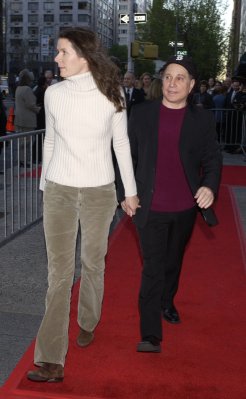 What Paul Simon and Edie Brickell's Arrest Means for Other Couples
Next Up: Editor's Pick