Electricity brings problems, says a hippie on an upstate New York farming commune to Roger Sterling in the fourth episode of Mad Men‘s seventh season, “The Monolith.” That’s a fairly accurate summary of Sunday’s episode: Roger is tasked with retrieving his daughter, Margaret, who goes off the grid to live in a free-loving, vegetable-growing utopia, while the arrival of a massive, early computer physically shakes up the SC&P offices and triggers a few personal crises within the agency.

Let’s start with Roger. When Margaret leaves behind her husband and young son to join whatever cult-like group she alluded to in their season-premiere reconciliation brunch, he becomes the natural choice to retrieve her — not just because of his own dabbling in 1960s counterculture, but because Margaret’s choice is apparently the kind of selfish, reckless decision only a Sterling would make and understand. Coming along for the ride is Margaret’s mother, Mona, who makes a welcome return to the series here. With the exception of Joan, Roger has always had more chemistry with his ex-wife than any of the other woman passing through his life (it probably helps that John Slattery and Talia Balsam are real-life spouses), and it’s Mona, too, who delivers the best line of the episode: “These people are lost, they’re on drugs and they have venereal diseases.”

Mona tries to assure Margaret that parenthood will ultimately fulfill her if she comes back to civilization, but a skeptical Margaret sends Mona running for the car when she brings up all the times Mona locked herself in the bathroom with a bottle of gin to escape her maternal duties. Roger, on the other hand, is a little lost himself at this point, so he decides to keep an open mind, and the two have a grand old time together. They peel potatoes! They enjoy the natural rhythms of mother nature’s clock! They ponder gathering firewood and the meaning of labor in a non-hierarchical society! They smoke a little weed! And then, after one of Margaret’s lovers steals her away in the middle of the night for some barnyard hanky-panky, the father-daughter bonding comes crashing to a halt.

There are number of reasons why witnessing his daughter’s nighttime activity would trigger Roger’s sudden suspicions about Margaret’s new lifestyle, but it’s likely he feels personally responsible for her choices and worries about a ripple effect — why else would he be so suddenly concerned with his grandson’s welfare? As Roger seems to see it, the commune is just an opportunity to sleep around and avoid responsibility — actions that are, frankly, straight out of the Sterling playbook. So Roger angrily asks her how she could abandon her child, and Margaret turns right around and accuses of him of having done the exact same. Both look hurt, but their big blowout was a little unsatisfying considering how the underlying issues behind it were more or less laid out at the beginning of the episode, if not several episodes ago. Roger was an inattentive father who doesn’t know to express his feelings about his parenting regrets, and Margaret has some lingering daddy issues — it’s that simple. This wouldn’t be the first time a disappointing dad on Mad Men had a wake-up call when confronted with what he did to his kids, so maybe Roger will begin earnestly repairing all his damaged relationships. So far, though, this scene just seemed like an excuse to let John Slattery roll around in the mud.

Over at SC&P, Don’s return to working life isn’t off to a smooth start. He’s already out of the loop and showing up late, almost missing the ground-breaking ceremony for the agency’s new computer, which, as Roger points out, seems to only do “magical things, like make Harry Crane look important.” In one of the more heavy-handed instances of Mad Men symbolism, the man overseeing the installation, Lloyd, tells Don that “these machines are a metaphor for whatever’s on people’s minds.” Did you catch that? The episode in which Don must confront his own impending obsolescence also features a device that threatens to one day replace humans!

But, more interestingly, the giant computer reminds viewers just how much physical space and power are intertwined in office politics. The relationships between rooms and the people who are allowed to enter them repeatedly offered the most interesting drama (as well as humor) in this episode: When the enormous computer displaces the creative team’s lunchroom hangout spot, a paranoid Ginsberg accuses the company of trying to “erase” him and the copywriters; there are at least three different references in this episode to how Don took over the office of Lane Pryce, who committed suicide there in season five; Don now shares a thin wall with Peggy, and he gets called into her office, not the way other way around; elsewhere, he looks on through glass doors as several partners’ meetings happen without.

In one of those meetings, Don’s career collides with Peggy’s in way few people saw coming — at least at this point in the series. Jim Cutler tried to lure Ted back to New York to head up the Burger Chef account Pete lands in the beginning of the episode, but Ted passes and suggests they let Peggy take the lead. Roger pushes to get Don back in the game, but it’s Lou Avery, shockingly, who enthusiastically endorses Peggy and puts her in charge. It’s one of the more exciting developments to happen this season, not just because it’s a long-overdue victory for Peggy, who has spent most this season being miserable and intolerable, but because it completely upends where this show appeared to be heading. The first few episodes of the season paved the way for a comeback, with Don secretly pitching copy through Freddy and getting covert client updates from Dawn. An apparent clash between Peggy’s work ethic and Lou’s “whatever” attitude seemed to require the intervention of someone who was passionate about good ideas, but Lou’s confidence in Peggy and dislike of Don turns the tables. Suddenly, Lou’s not the enemy, he’s the one giving Peggy a raise; suddenly, Don and Peggy aren’t potential co-conspirators who feel like they’re being babysat — she’s basically his boss.

Up until this point in the season, Don had shown over and over again that he was a changed man, but mostly in the face of relatively minor temptations and inconveniences. Forcing him to work for Peggy, however finally offers the big test of whether he’s serious about progress after all. Don’s most redeeming quality has been his creative work, so while he can (sort of) curb his drinking, open up to his family and start making up for his personal shortcomings, working for Peggy — who’s clearly enjoying her newfound authority — reminds him of how far he’s fallen and how unnecessary he’s become.

So it’s not surprising that he takes the news of his new assignment poorly. He hurls a typewriter and throws a temper tantrum; he plays solitaire and reads books instead of going to meetings; he tries to get out of working for Peggy by pitching Lloyd’s computer business to Bert Cooper, who quickly puts him in his place; he steals vodka from Roger and gets wasted in the middle of day. While drunk, he makes a scene in the office in front of Lloyd and tries to hit up a baseball game with Freddy, but Freddy, who knows a thing or two about getting sober, takes him home and gives him some tough love. If you want your old job back, he explains, you have to behave like an adult and work for it. If you want the partners to stop rooting against you, just prove them wrong.

The message gets through. Jon Hamm told TIME that Don is a man who takes two steps backwards for every step forward, yet the closing scene of him at his typing on his typewriter, sucking it up and promising Peggy the work she asked for, felt like it could have been the mid-season finale — a chapter closed, a new page turned. Writing for Entertainment Weekly two years ago, Owen Glieberman predicted this would happen — of course Mad Men would end with Don working for Peggy, because what’s a better way to tell the story of Don’s demise than to put him directly under the supervision of the copywriter he basically discovered?

But this isn’t the end of Mad Man at all. In fact, there are three more episodes this season and another seven due next year. Don can still fail as a team player and drag her down, or maybe Peggy will pull him up to start their own agency (okay, that probably won’t happen, but Draper & Olson has a nice ring to it, right?). Either way, if it took four episodes of careful plotting to reunite Don and Peggy in the most eventful episode of the season, their relationship can only get more important and illuminating as the series winds down. 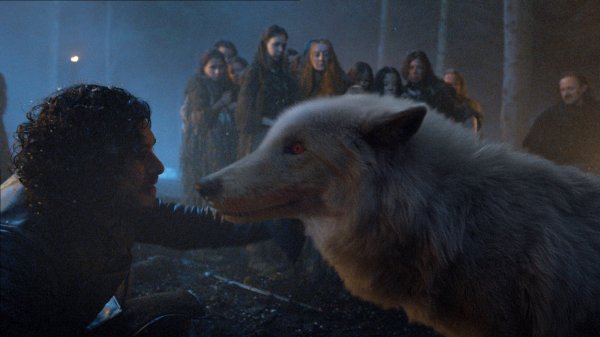 Recap of Game of Thrones, "First of His Name"
Next Up: Editor's Pick