In the first lines of his public apology about the traffic scandal imperiling his political future, New Jersey Gov. Chris Christie referenced himself repeatedly. Arranged as a first-person poem, those lines would look like this:

I come out here to this office where

I’ve been many times before and

I apologize to the people of Fort Lee and

I apologize to the members of the state legislature.

I am embarrassed and humiliated …

Pundits pounced on Christie’s usage of self-referential pronouns during his marathon news conference—about lane closures near the George Washington Bridge that turned out to be an act of political vengeance—presenting them as confirmation that Christie is egotistical and self-centered. But while the governor may have such unflattering attributes, academics have pointed out that drawing such a conclusion based on “I” and “me” counts is a faulty science.

New York magazine’s Benjamin Wallace-Wells argued that when Christie rephrased a reporter’s question as “What does it make me ask about me?”, the prospective 2016 candidate had unwittingly captured “the essence of Chris Christie,” a man who “can make any story, no matter how big, about him.” In the New York Times, Frank Bruni wrote that Christie “found a way to spell apology with a thousand I’s,” and tied this to an assertion that Christie “always seems to have himself first and foremost in mind.”

This isn’t the first time that the governor has been accused of self-aggrandizing based partly on how many times he strayed into first-person singular territory. And Christie’s critics are hardly the first to imply that kind of correlation. After President Barack Obama announced Osama bin Laden’s death, National Review’s Victor Davis Hanson said that his usage of words like I and my reflected “a now well-known Obama trait of personalizing the presidency.” In a review of a book Bill Clinton wrote after his presidency, Newsweek’s Evan Thomas said that “judging from his use of the first-person pronoun four times in the first sentence, his agenda is not entirely selfless.” In 2008, columnist Frank Rich declared that “All presidential candidates… are egomaniacs,” and he submitted first-person pronoun tallies from speeches by Obama, Hillary Clinton and John McCain as evidence.

Language researchers have taken the time to do more math than that. One thing they’ve found is that politicians maligned for using an inordinate amount of first-person pronouns don’t necessarily use them more than other politicians. “If you struck from Barack Obama’s vocabulary the first-person singular pronoun, he would fall silent,” conservative columnist George Will has said. But in his book The Secret Life of Pronouns, social psychologist James Pennebaker examined presidential press conferences from Truman to Obama and found that the current president actually used the I-word less than any other president in recent history.

In the wake of Christie’s so-called Bridgegate scandal, University of Pennsylvania linguistics professor Mark Liberman conducted a similar test. He took a selection of apologies excerpted by the New York Times the day after Christie’s news conference and analyzed the frequency of first-person singular pronouns in the full statements. He found that Christie’s was in the middle of the pack, containing a lower percentage than apologies given by politicians such as Bill Clinton, David Vitter, Anthony Wiener and Eliot Spitzer.

“When pundits make quantitative claims, even implicit ones, those claims ought to be true,” Liberman said in an email. “If they complain about how so-and-so is inordinately fond of doing whatever, we should be able to trust that if we count so-and-so’s whatevers, there really will be more than we’ll find for other similar people in similar circumstances.”

In this circumstance, Christie was apologizing, which means it’s natural for him to use more personal pronouns than he would in, say, a speech about inclement weather. In his analysis, Liberman looked at the excerpts as a composite and found that nearly 10% of the words were first-person singular pronouns. “That’s just the nature of the situation,” Liberman says. “The person apologizing needs to take responsibility or deny it, to explain what they did or didn’t do, why they did it or didn’t do it, how they feel about it, and what if anything they’re going do about it.” Talking about his aide who was partly responsible for the closure, Christie could have used a shirking passive voice and said “someone who was in that circle of trust… betrayed my trust.” Instead he upped the I-count and said, “someone who I permitted to be in that circle of trust… betrayed my trust.”

In his research, Pennebaker found that I-words work differently than people would likely expect. People who are insecure and self-deprecating tend to use a lot of I-words, while people who are confident or lying tend to drop them. After examining a transcript of Christie’s presser, Pennebaker tells TIME that his use of first-person pronouns is in a “high-normal” range. “The way he is using I-words is consistent with someone who is self-focused and self-reflective, perhaps guilty, anxious, and even self-effacing,” he says. “The overall tone of the press conference is not one of arrogance—at least as measured by I-word usage.”

Determining someone’s state of mind through their use of pronouns is still a far cry from declaring their character. The suggestion that Christie showed his egomaniacal colors through pronouns in his mea culpa is “like accusing someone of lying because he blinks so often, when (a) he doesn’t blink especially often, and (b) blinking a lot is not a reliable sign of lying anyhow,” Liberman says. That’s not to say that critics are wrong to accuse Christie or Obama or any other politician of egotism—just that even a thousand I’s or me’s aren’t proof. 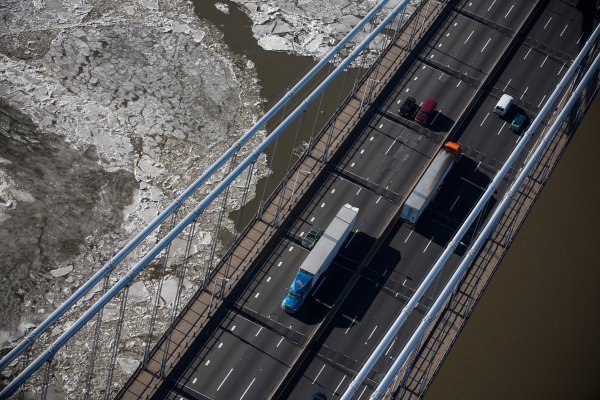 Christie's Traffic Jam May Have Cost Millions
Next Up: Editor's Pick