Members of the nationalist political party and paramilitary collective Pravi Sektor rally at Odessa's police headquarters and the burnt-out Trade Unions building in Odessa, Ukraine, on May 4, 2014.
Cosimo Attanasio—Demotix/Corbis
By Nolan Feeney

The clashes in Odessa marked the deadliest since February when Ukraine’s president fled to Russia and militants began to occupy government buildings in the restive eastern region. “The police in Odessa acted outrageously, possibly in a criminal fashion,” Avakov wrote on his Facebook page. “The ‘honor of the uniform’ will offer no cover.”

Fresh violence broke out Sunday after hundreds of people gathered outside the headquarters calling for the release of those arrested Friday, the BBC reports. They broke windows and forced open the headquarters’ gates while yelling, “Odessa is Russian city, one for all and all for one,” CNN reports.

In response, Ukraine released 67 people who had been detained.

“Based on the decision taken by Odessa’s regional prosecutor’s office and due to the demands of the protesters, 67 people previously detained for participating in mass disturbances on May 2nd in Odessa were released Sunday,” the Ukrainian Interior Ministry’s website read.

As Ukraine’s military began an operation to reclaim the eastern cities occupied by pro-Russia forces on Friday, gunfire broke out in the streets of Odessa, the Associated Press reports. The use of Molotov cocktails also caused a union building to catch fire, killing at least 31 people, most of whom were believed to be pro-Russian activists.

Although separatists released eight military observers on Saturday, officials in Ukraine warned that the situation in the country’s east was spinning out of control. “What is happening in the east is not a short-term action,” said Vasyl Krutov, head of the Ukrainian government’s antiterrorist center. “This is essentially a war.”

The former U.S. ambassador to Moscow made a similar warning Friday, saying the situation could lead to a full-fledged invasion by Russian troops. “The last 24 hours was a major escalation,” Michael McFaul told TIME. “This is real. This is war.”

Ukraine’s Prime Minister Arseniy Yatsenyuk suggested Russia was to blame for the outbreak of violence during remarks in Odessa on Sunday, but he said local police were being investigated for their inability to maintain order on Friday.

“This is not a tragedy only for Odessa,” Yatsenyuk said. “This is a tragedy for all Ukraine.” 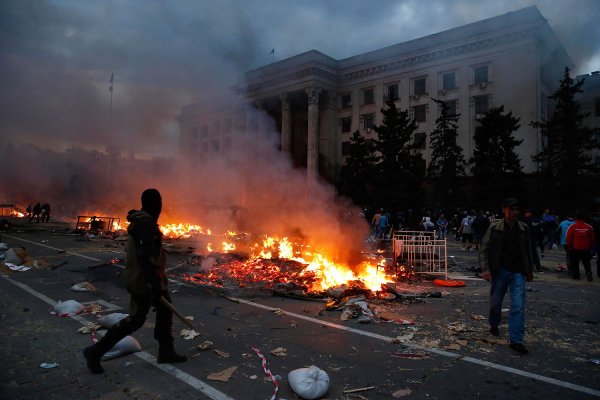 'Major Escalation' in Ukraine
Next Up: Editor's Pick