Kareem Abdul-Jabbar: How to Tell if You're a Racist Like Donald Sterling

Polls show that more whites believe in ghosts than believe racism is a problem in America. I guess that’s why Ghost Hunters is so popular but my show, Racist Wranglers, never got picked up. Maybe the reason is how we define racism.

Donald Sterling is not a racist.

In his own mind.

To their family, closest friends and adoring pets, they’re just plain-speaking Americans who have probably said the phrase, “I don’t care if you’re white, black, yellow or purple.” (FYI: You might be a racist if you’ve used that phrase.)

That’s why their faces have that shocked “Who me?” expression at the public outrage over their statements.

All of them could probably name several people of color among their friends, close acquaintances and business associates. All could probably cite minority folk they’ve personally helped through their generosity. Sterling was about to receive a second NAACP award (since canceled) for his work with minority children. He had a mixed-race girlfriend. What more proof can the public want of his “I don’t see color” purity!

What’s that? You say you need further proof that he can’t be a racist?

Commentator Bill O’Reilly informed us that discrimination is “all in the past.” Fox News’ Eric Bolling seconded that by saying, “Is there racism? I don’t believe there’s racism.” A Republican National Committee tweet on the 58th anniversary of Rosa Parks’ arrest confirmed the body of racism had been buried: “Today we remember Rosa Parks’ bold stand and her role in ending racism.” Bam! Done! Mic drop!

How about the U.S. Supreme Court, you skeptical naysayers. The Justices (all wearing black gospel robes in support of racial equality) confirm Sterling and Pals’ assertion that they are not racists by proclaiming, “Racism is dead!” Well, if not dead, at least suffering from debilitating acid reflux. Several of their recent decisions, invalidating key parts of the Voting Rights Act of 1965 and striking down affirmative action, were based on the court’s assessment that “We’ve come a long way, baby” since the civil rights movement of the 1960s. I’m surprised they didn’t close their decision with a wink and a “Can you dig it?”

Well, go tell it on the mountain, Justices, because down here in the flatlands of daily living, racism isn’t just alive, but it’s cloning faster than Sean Hannity can backpedal his support of Cliven Bundy.

Racism today isn’t like the racism pre–Martin Luther King Jr. Today we are faced with “situational racism.” This is similar to situational ethics, a philosophical and theological movement that argues that rather than having fixed, one-size-fits-all ethical rules of behavior, the context of each situation must be considered before determining the correct moral choice. Situational racism applies this flexible principle by declaring we must act according to a realistic analysis of race as it is in our society right now, not as we wish it were.

The clichéd example: You’re walking down a dark, deserted street and a bunch of black teens adorned with dagger tattoos and carrying bongs made from human skulls are walking toward you. If you cross the street, are you being a racist or a realist?

That’s what Sterling meant when he said on the tape, “It’s the world! … We don’t evaluate what’s right and wrong, we live in a society. We live in a culture. We have to live within that culture … I don’t want to change the culture because I can’t. It’s too big …” He didn’t see his attitude as racist, just a practical reaction to a racist world.

Basically, he’s saying, “It’s not me. It’s Society! It’s the Man! I’m just a helpless pawn, a clump of toilet paper caught in the swirling toilet bowl of history.” The housing discrimination he was convicted of wasn’t racism, it was just practical business sense. After all, he’s in business to make money, not history.

Maybe the worst racism of all is denying that racism exists, because that keeps us from repairing the damage. This country needs a social colonoscopy to look for the hidden racist polyps. And we aren’t doing ourselves any good by saying, “I feel fine. Everything’s fine. Nothing to see here.”

The truth is, everyone has racism in his or her heart. We feel more comfortable around people of similar appearance, backgrounds and experiences. But, as intelligent, educated and civilized humans, we fight our knee-jerk reactions because we recognize that those reactions are often wrong and ultimately harmful.

One symptom of the malady is the many apologists using the election of President Obama as proof that racism doesn’t exist in the U.S. Yes, his position truly is a sign of the distance we’ve all covered in the last few decades. But, as recent events have proved, this race is a marathon and President Obama is merely a milestone, not the finish line.

The finish line is when racism no longer exists, not when people claim it doesn’t exist because they personally don’t notice it. Why is it that the people who are declaring racism dead are mostly white? Because if you’re not a targeted group, you don’t notice it. A 2006 CNN poll showed 49% of blacks saying racism is a “very serious” problem, while only 18% of whites agreed. A 2012 Associated Press poll showed that 51% of Americans expressed anti-black attitudes, up from 48% in a 2008 survey. Also, 52% displayed anti-Hispanic biases.

Every time the media call attention to racism, it raises the awareness of those who otherwise might not have noticed it around them. It’s a variation of the Baader-Meinhof Phenomenon, in which someone learns a new bit of information and suddenly sees the information being used in multiple places in a short period of time. The reason for this is that the brain is constantly inundated with so much information that it rejects what it considers uninteresting (“uninteresting” being things that don’t affect you personally). This process is known as “selective attention.”

That’s why the best way to combat racism in the face of selective attention and situational racism is to seek it out every minute of every day and expose every instance we find. And not just racism, but also sexism, homophobia and every other kind of injustice that lessens the principles of inclusion that define this country.

We can’t let others control the perception or the message. We’ve got to go tell it on the mountain ourselves.

Kareem Abdul-Jabbar is a six-time National Basketball Association champion and league Most Valuable Player. Follow him on Twitter (@KAJ33) and Facebook (facebook.com/KAJ). Mr. Abdul-Jabbar also writes a weekly column for the L.A. Register. 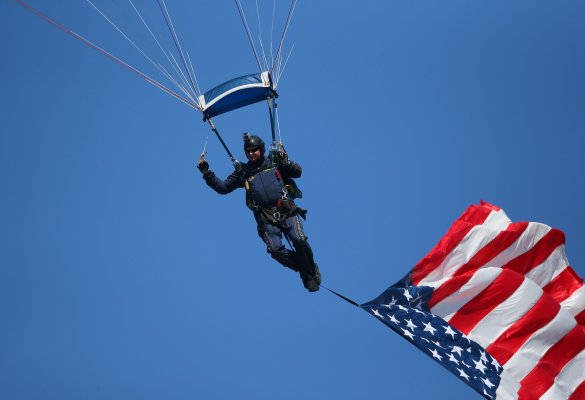 Fearlessness: 3 Things You Can Learn From Special Ops and Navy SEALS
Next Up: Editor's Pick