President Barack Obama turned the tables on his haranguers in the media and in Congress at a star-studded dinner Saturday night, taking smiling pot shots at some of his most persistent critics.

Obama barraged the gridlock in Congress, the Nevada ranchers controversy, Chris Christie’s alleged traffic jam and Fox News at the White House Correspondents’ Association’s annual dinner at the Washington Hilton, where correspondents of major media outlets and prominent political figures gathered for a light-hearted night in a city not known for its levity.

“The Koch brothers bought a table here this evening but they used a shadowy right-wing organization as a front. Good evening, Fox News,” Obama said.

The president called out some prominent Republicans in the House of Representatives, where he has seen some of the most hostile opposition to many of his policies. “I’m feeling sorry for the Speaker of the House as well. These days, House republicans give John Boehner a harder time than they give me. These days, orange really is the new black,” Obama said, poking fun at Boehner’s persistent tan.

Boehner’s second-in-command in the House, Eric Cantor didn’t escape a jab either. “You know, I get letters from folks around the country. This one got to me: Virginia man been stuck in the same part-time job for years, no respect from his boss, no chance to get ahead. I really wish Eric Cantor would stop writing me,” Obama said.

President Obama was self-deprecating, too, mocking the rollout of the Affordable Care Act’s website late last year. “In 2008, my slogan was ‘Yes we can,’” he said. “In 2013, my slogan was ‘Control, Alt, Delete.’” At the end of his remarks, Obama screened a satirical ‘thank you’ message that stalled, and invited Kathleen Sebelius, the former Health Secretary to jokingly assist in fixing the video.

Joel McHale, the star of NBC’s Community, was the featured comedian at the dinner, where he also cracked jokes at Obama’s expense. “I’m a big fan of president Obama. I think he’s one of the all-time great presidents. Definitely in the top 50.”

McHale isn’t known for political comedy, but he’s used to mocking celebrities as the host of E!’s The Soup.

A smattering of other starts attended the event, including Robert De Niro, who was promoting a documentary on his artist father, 12 Years a Slave director Steve McQueen and actress Lupita Nyong’o, Gravity director Alfonso Cuaron, Her director Spike Jonze, and a faux vice president to fill the absent Joe Biden’s shoes, Julia Louis-Dreyfus of HBO’s “Veep.”

The dinner is hosted by the White House Correspondents’ Association and serves partially as a charitable event that awards scholarships to young journalists.

The occasion has sparked criticism in the past, with prominent journalists like Tom Brokaw speaking out against the attendance of high-profile celebrities who critics say distract from the business of governing the country.

“Are we doing their business, or are we just a group of narcissists who are mostly interested in elevating our own profiles?” Brokaw said last year. “What comes through the screen on C-SPAN that night is the latter, and not the former.”

The White House Correspondents’ dinner has often served as a springboard for aspiring comedians looking for a national spotlight, most notably helping promote funnymen like Stephen Colbert who gave a blistering roast of George W. Bush in 2006, or Seth Meyers in 2011.

One of the most dramatic moments in the history of the annual gala came in 2011, when President Obama attended even as a team of Navy Seals was preparing for its top-secret operation against Osama bin Laden. Obama sat through the gala between meetings with top advisors, and kept a straight face—even when host Seth Meyers made a bin Laden crack.

“People think bin Laden is hiding in the Hindu Kush, but did you know that every day from 4 to 5 he hosts a show on C-SPAN?” Meyers joked at the time.

Obama was in the Situation Room the day after the event, watching a live feed of the operation as bin Laden was killed.

The president ended his speech Saturday on a more serious note, reminding the crowd of the difficulty of reporting the news in war-torn regions including Syria, Egypt and Ukraine “We really are lucky to live in a country where reporters get to give the president a hard time on a daily basis, and then once a year give him or her a chance at least to try to turn the tables.” 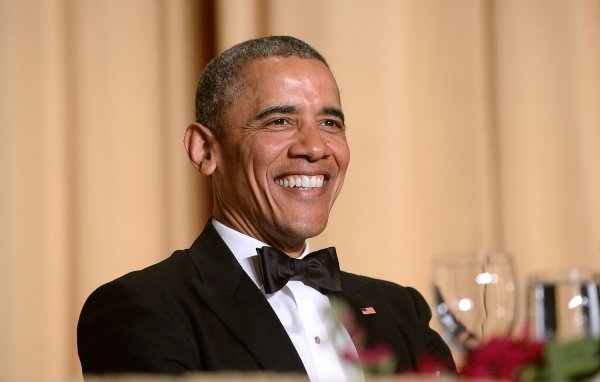