Exclusive: The Dalai Lama Talks Pot, Facebook and the Pope With TIME

Ahead of a lengthy two-week tour of the U.S. west coast, the Dalai Lama, the Tibetan spiritual leader, spoke with TIME religion reporter Elizabeth Dias during a wide-ranging, 40-minute interview in Washington D.C. on Wednesday. He weighed in on the moral challenges that face U.S. foreign policy, the threat of climate change and the importance of healthy relations between China, the land of his birth, and India, the country which has given him a home in exile for over half a century. Though the 78-year-old Dalai Lama is routinely vilified by officials in Beijing, he had some warm words for China’s new President Xi Jinping. Below are excerpts from the conversation:

Tibetan freedom was once a major cause in the U.S., but today it gets very little attention. Was it a fad here?
Any sort of problem, initially, is something fresh. Then time passes … I feel the Tibetan issue, comparatively, remains quite strong everywhere.

Has the U.S. backed away from addressing human rights issues in China because Beijing is a more important economic power?
No, I don’t think so … Freedom, democracy, justice, these are American principles. [For] some people, the economy is more important … That’s a mistake. Look at Africa, Syria. Because of lack of moral principle, human life becomes worthless. Moral principle, truthfulness, is a key factor. If we lose that, then there is no future.

What global issues do you think the U.S. could be paying more attention to?
Ecology. The East Coast of the United States has now unusual snow these days. Then in England and India also, the climate pattern is changing. Some scientists believe climate change is the cause of unprecedented melting of the North Pole, and that effects these very uncertain weather patterns. I think we should listen to those scientists and experts.

Do Facebook and Twitter help or hurt our happiness?
It depends on how you use them. If the person, himself or herself, has a certain inner strength, a certain confidence, then it is no problem. But if an individual’s mind is weak, then there is more confusion. You can’t blame technology. It depends on the user of the technology.

You support the use of medical marijuana. Have you ever smoked pot?
No. Never. These kinds of substances are generally considered poison, very bad. But for particular illnesses, this is sometimes deliberately used. So that’s up to the doctor, or up to scientists. The ability to judge reality is something very unique. Our brain is something very special. So if that is damaged, that’s awful. So alcohol and drugs are very bad.

What do you think Pope Francis and the Catholic Church can learn from Buddhism’s view of women?
Generally speaking, each one should follow their traditional way, [but] sometimes we have to judge according to a new reality. For example, female rights are very important. His Holiness, the Pope, I think is very, very realistic and quite strict. I really ­admired his dismissing one German bishop [who was living] his own private life in a very sort of expensive, luxurious [way].

What would you say to a Tibetan protester who is on the verge of sacrificing himself through self-immolation?
Firstly, this is very, very sad. Human life is very, very precious. This is very, very sensitive political issue. Whatever I say the Chinese hardliners always manipulate. And then, I also retired [several years ago] from political responsibility. So the best thing is to keep quiet.

Do you think the India-China rivalry is a good thing for Asia, and is it good for the cause of the Tibetans?
Not at all. Genuine good relations based on mutual trust [could] really make a significant contribution to economic development, as well as to education and spirituality. So there is a real room to develop trust between India and China.

What do you make of China’s new president, Xi Jinping?
He is courageously tackling corruption, quite effectively. Fearlessly. [But] real development must take place in rural areas. It is not a solution to build new, big cities. [Also] 1.3 billion Chinese people have every right to know reality … Censorship is an unrealistic method that actually develops distrust and suspicion. The Chinese judicial system must be lifted up to the international standard of judiciary systems. Then these 1 billion poor people can have some kind of protection. 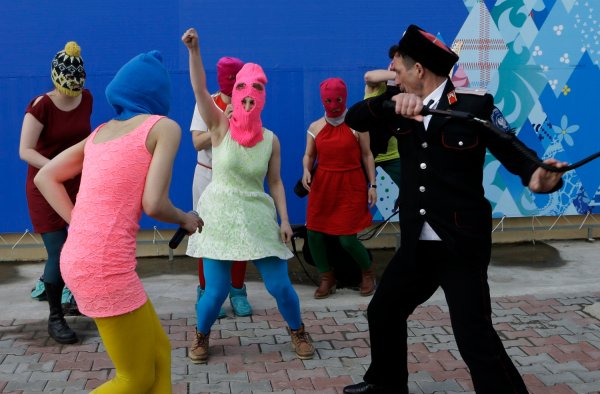 Pussy Riot Attacked in Sochi by Cossack Militia
Next Up: Editor's Pick