A protester throws a petrol bomb at the trade union building in Odessa, Ukraine May 2, 2014.
Yevgeny Volokin—Reuters
By Noah Rayman

Deadly gunfights between pro- and anti-Russian groups in the southern Ukrainian city of Odessa broke out Friday, and a fire linked to the clashes killed 31 people.

Odessa, a largely Russian-speaking city on the Black Sea near Crimea, had been generally free of the deadly violence that has erupted in Eastern Ukraine. But on Friday, police say three people were shot dead and 15 others injured in street battles, the Associated Press reports.

Another 31 people were killed in a fire that broke out in a union building during the clashes, but police did not say how the blaze started.

The violence Wednesday coincided with intensifying clashes in the country’s east, where government forces resumed operations against separatist militants who have taken control of towns in the region.

The government forces captured checkpoints outside the separatist-held city of Slovyansk and said they had “encircled” the city, according to Reuters. Separatists said Ukrainian forces killed three fighters and two civilians.

The Western-backed government in Kiev said two helicopters were brought down with missiles, killing two airmen, which it said was an indication that Russian forces were aiding the separatists, according to Reuters.

Russia, which has amassed thousands of troops on Ukraine’s eastern border after annexing Ukraine’s Crimea, has warned that it has the right to intervene to protect ethnic Russians. On Friday, a spokesperson for president Vladimir Putin called the assault by Ukrainian government forces a “punitive operation” and said the action destroyed “the last hope of survival” for a peace roadmap jointly agreed upon on April 17 by Russia, Ukraine, the United States and the European Union. 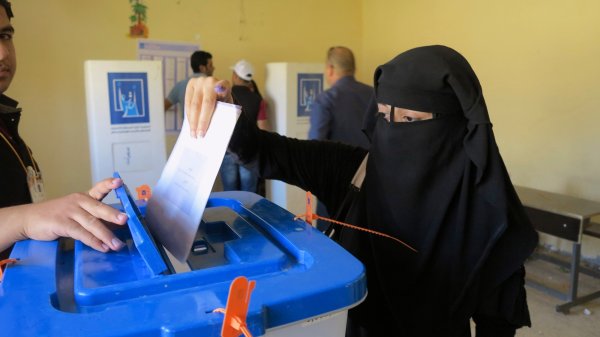 Iraq Votes Under Relatively Calm Conditions
Next Up: Editor's Pick