Lykke Li emerged on the music scene six years ago as a mysterious, free-floating ingénue, all black eye shadow and delicate swoon, her dainty vocals breathing life into lyrics about loneliness and detachment over hand-claps and raging, almost tribal drums. In the time since, the now-28-year-old Swedish singer-songwriter has released a pair of critically acclaimed albums and steadily built a rabid fanbase as well as a a reputation as a mystical, mesmerizing performer.

Still, as she prepares to release her third album, the bare, heartbreaking I Never Learn — an album the singer views as the final installment in a trilogy of LPs chronicling the search for love — Li believes she must continue fighting for respect. “I will always be the underdog,” she tells TIME in a wide-ranging conversation that touches upon the songstress’ sonic left-turn of a new album, being unfairly labeled as a “pop” artist and the benefits of throwing back a few bottles of wine before performing.

TIME: Was it always your intention to have I Never Learn be the conclusion of a trilogy of albums?

It was. I signed a three-album [deal] when I was about 21. So I knew that I had embarked on this journey and that there was no turning around. I’m interested in a lot of different sounds and types of music. Instrumental music or voodoo music or purely singer-songwriter [material]. So, on this album, I was like, “I want to do something completely different.” But I felt like, “No, I have to finish what I started.”

What’s been the overarching theme of your first three albums?

I’ve been trying to chronicle a woman in her twenties and her search for love and herself. I think everything in life comes in threes: heartbreak and all that. You’ve got to do the full round in order to learn.

With I Never Learn now complete, can you move on?

Yeah. In a good way. I do think it just coincides with my age, too. I feel like a lot of people, when they turn 30, it’s like the beginning of another chapter. It’s symbiotic.

This album, though, is different than its predecessors. It’s so bare, and it’s some of your most personal and revealing material.

I’ve always been a person that is searching for truth and always wants to go further, deeper. So it’s just natural for me to try and go as deep as I possibly could. And strip away. It’s almost like you go hunting. The thing is, when I was writing it, I just did it for myself. I was feeling all of this. And I didn’t know any other way but to write about it. I didn’t think that anyone would ever hear it. I made a really private [album]. Also, the type of art that I can relate to and that’s changed me is the most revealing and personal. I think it always has to be personal if it’s going to be great. And if it’s going to be able to reach someone else you have to reveal part of yourself. I think what’s been probably the most hard thing is to do interviews, because I have a tendency [to be] real honest. And that can get a bit too much.

It must be hard to dissect your own craft.

It is really hard. But at the same time I have to stand for the art that I did. And I can’t start lying now. I made an agreement with myself to be as honest as I possibly could. It would be strange for me to start lying and say like ‘Oh, this song is about someone else.’ It’s almost like I only know how to be honest.

Being that your music is so singular, is it frustrating see it labeled “pop”?

I think any type of label frustrates me. It’s hard being labeled as a woman. But what I’m trying to do with my art is not label it. And search. Search for truth. Search for meaning. Search for the unexpected. Search for mystery. So yeah, it’s hard when people put you in a box, and all you try to do is break out of that box.

It’s doubly funny that your music is labeled as “pop” seeing that you grew up with no TV, no Internet, literally no pop culture references at all.

That’s the thing: it’s weird because whatever music I do it comes very naturally to me. It’s not like I’m trying to replicate something. I’m simply just following my intuition. And especially because growing up, I didn’t have anything: I hardly had any toys. I guess what that allowed me to do was it gave me a lot of imagination and freedom. And that’s what I always look for in life too. So that’s why it can be hard to live life because it can be so restricting, you know?

Touring can be also be a tough pill to swallow — especially given the fact that every night you’re performing such highly emotional songs.

The time onstage is very lovely. It’s a lovely thing to be dealing with real material. It’s almost like when you do a play by Tennessee Williams: the lighting is so pure and so great. So it is great material, you know? But I guess what’s difficult is the life around me. So that’s why it’s really important for me to have my band close to me and people that I trust and people that I’ve known for a long time. It can also help me to let off some steam after the show.

What puts you in a good headspace before performing?

Drinking three bottles of wine. My favorite thing in the world is to have just a big dinner with friends and just sit and talk about their life and their difficulties and all of that.

Are you able to get a firm grasp on your growing popularity as an artist?

Not at all! I’m so unaware of anything. I’m the exact same person that I’ve always been. And I have pretty much the same habits. And I have no idea if I’m popular or not. I will always be the underdog. Always a dreamer. 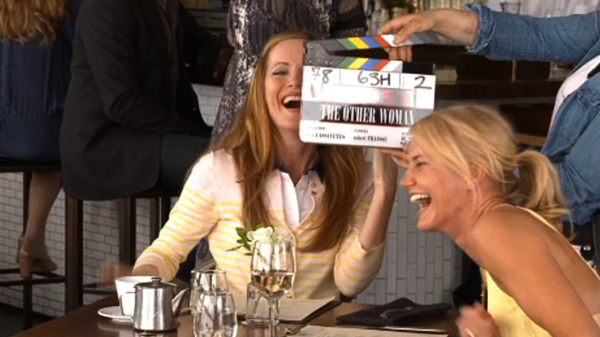 Go Behind the Scenes of The Other Woman
Next Up: Editor's Pick