The Bad News About the Good Job Numbers

Spring finally arrived in the job market. The U.S. Bureau of Labor Statistics reported that nonfarm payroll employment rose by 288,000 and the unemployment rate fell by 0.4 percentage points to 6.3% in April. That’s a strong number, reflecting both a rebound from the weather-challenged first quarter of the year, which curtailed industries such as construction and retailing. Job growth has averaged 190,000 per month over the last 12 months, according to BLS. April’s overachievement was widespread, led by gains in professional and business services, retail, restaurants, and construction.

But if the economy is blooming with the improving weather, it is certainly not booming. “The view from the outside is very positive, but there are an usual number of caveats in the report to suggest the inside picture of the labor markets is less pretty than that juicy +288K might otherwise suggest,” wrote Guy LeBas, Janney Montgomery Scott’s chief fixed income strategist.

The biggest of those caveats is the drop in the civilian labor force. The number of people in the workforce declined by 806,000 in April, after increasing 503,000 in March. It’s a disappointing drop, and lowered the labor force participation rate—the proportion of the adult population that is working or looking for work— by 0.4 percentage points to 62.8 % in April. Having fewer people active in the economy is not a recipe for growth.

That’s why the drop in the unemployment rate, while encouraging, is also distracting. “This one number is clearly not telling policymakers what it’s supposed to. It’s become a bad measure of the job market,” LeBas said. The unemployment rate dropped because people left the work force, not because they found work.

Another weakness: Job growth did not do much for wage growth. Hourly average wages for April were unchanged, and the average workweek held steady at 34.5 hours. So even though consumer spending rose last month—another spring rebound tied to the weather—workers aren’t getting the higher wages they need to increase spending. Remember, consumer spending is roughly two-thirds of the economy.

That weakness in workforce participation will continue to hold the attention of Federal Reserve Chair Janet Yellen and the Federal Open Market Committee (FOMC) as it wrestles with interest rates. Yellen is scheduled to report on the economic outlook to the congressional Joint Economic Committee next week. Part of the broader debate centers on whether keeping long-term interest rates low will help the long-term unemployed, or whether there’s a need to keep inflation on a leash as the economy expands. In other words, is there still slack in the labor market? The April data suggests there is.

Yet according to Rick Rieder, CIO of fundamental fixed income for investment firm BlackRock, companies remain risk averse and cost conscious despite the low rates, which will keep a ceiling on hiring. So will other problems, such as mismatches in skill sets and education levels. In fact, there are some economists who believe that many of the longterm unemployed will never rejoin the workforce, meaning there may not be as much slack in the labor market as you’d expect—and that rates should go up more swiftly to combat the risk of future inflation.

These factors signal a slow but steady growth in employment, but nothing like previous expansions. “Looking ahead, we continue to anticipate a trend of reasonable growth in the U.S. within a global economy whose growth rate can best be described as uninspiring, but growing nonetheless,” Rieder said.

In other words, while it’s been a warm spring in the labor market, don’t expect a hot summer. 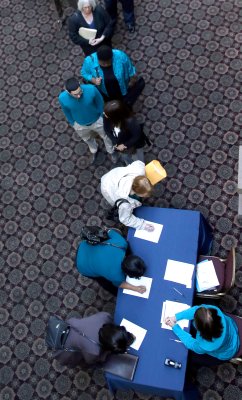