Iraq Votes in Relative Peace, But Governing Remains a Challenge

Voting in Iraq’s first election since American troops left the country went relatively smoothly this week. Turnout reached almost 60 percent, no major irregularities were reported, and in a country defined for more than a decade by car bombs and mass fatalities, the death toll for election day stood at 14.

“Anywhere else in the world, that would be seen as a terrible disaster,” says Hayder al-Khoei, an associate fellow at Chatham House, a London think tank. “Everything is relative in Iraq.”

But then, getting people to vote has not been a great challenge in Iraq, especially in Baghdad, where traffic closures and security services out in force made for relatively safe. The problem, in Iraq, is what comes next: governing.

Wednesday’s parliamentary election was the third since U.S.-led forces overthrew Saddam Hussein 11 years ago, and amounted to a referendum on the man who has governed for the last eight years: Nouri al-Maliki, seeking a third term as prime minister, is widely criticized for ruling the country of 32 million with a focus on sectarian divisions. Opponents argue that by favoring Iraq’s long-oppressed Shiite majority, he has encouraged a Sunni rebellion that has opened much of Anbar province to groups affiliated with al-Qaeda. Meanwhile, Iraq’s third major population, the Kurds, essentially govern themselves in a largely autonomous northern enclave.

Very early returns suggested that, as analysts expected, Maliki appeared likely to remain the dominant political figure, though in a more crowded political universe. All major parties appeared to be drawing fewer votes than four years earlier, as smaller parties fractured the vote within each bloc.

“He won,” al-Khoei says, “but it doesn’t look like he won by a large enough mandate” to assure a third term without forming a coalition— a negotiation process that dragged on for 10 months in 2010, and might take even longer given the increase in parties. The process could also aggravate the sectarian warfare that has already led to death tolls approaching the “civil war” bloodletting of 2006-7. But al-Khoei says the process might also do the opposite, leading to the kind of inclusive character that has eluded Iraqi governance to date.

“One of the paradoxes of Iraqi politics as I see it is the atmosphere is incredibly sectarian,” al-Khoei tells TIME. “But at the political levels, in a weird way it’s gone beyond sectarianism, because all the parties are much more fragmented. So it seems to me it’s much more likely that blocs within the blocs will do deals at the expense of their co-religionists or fellow Kurds.”

As in 2010, the makeup of a governing coalition will likely be influenced by Iran, which, despite the massive U.S. investment in lives and treasure, has emerged as the dominant outside influence in Iraq. Analysts call that another impediment to building trusted institutions as committed to democracy as the citizens who defy threats and bombs to cast their ballots.

“The election is not the problem,” says Hiwa Osman, a former aide to Iraq’s Kurdish President, Jalal Talabani. “The key thing with Iraq is it needs to figure out what kind of system you have.” While Kurds favor a federal system with loose control, others prefer a centralized system—though Maliki has so concentrated powers that some critics warn of an emerging dictatorship.

“I think Iraq is on a path whereby however more central government wants it to be, the more distance it will create between its various components,” says Osman, “Maliki has been trying for more than a year to control it by force, but security usually comes last in handling any political problem. Anbar’s problem is a political problem.” 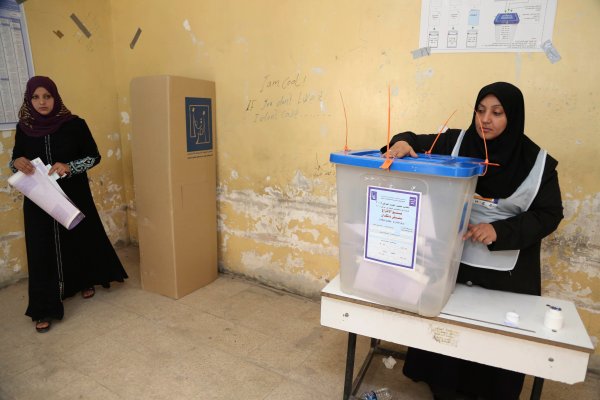 Violence and Strife Persist As Iraq Holds Elections
Next Up: Editor's Pick